Maggie’s Farm No More: Goodbye to the Way We Were 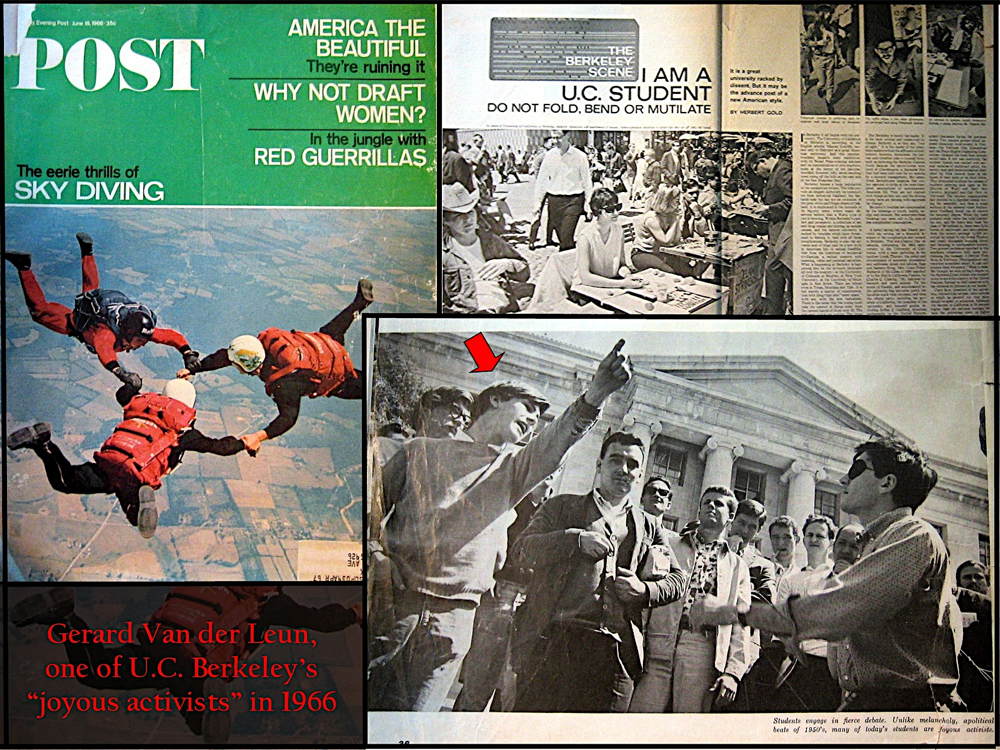 My Back Pages: Debating on the step of Sproul Hall, UC Berkeley, 1966. (Left to right:) Me (Somewhat younger but just as strident), An Iranian friend named “Jaz” — worked with me in the UC library, a refugee from the Shah’s Iran — probably went back after the fall of the Shah, and (foreground right) a guy lost his eye in the Hungarian Uprising and had to run for the border and on into the West to stay alive. In this picture he’s attempting to convince me that Communism is an evil ideology. I’m not hearing him then, but I hear him now.

If you look closely at the media/propaganda machine’s diet for a diminished America you see a familiar list of “ingredients.” The list is composed of the ideological stock and trade of a significant segment of Americans to whom this nation, as conceived by our founders, and whom our forefathers struggled for more than 200 years to achieve “a more perfect union” is merely one long, large raaaaacist joke.

I should know. I lived with and agreed with all those “Americans.” That boy in the picture up there — that boy that thought Communism was “something we could live with” — that young boy was me.

Our “Let’s make it perfect” program was quite clear early on and it hasn’t changed a jot since; it has simply gotten more pervasive and elaborate. After all, we’re older now and we’re in control. We can finally fund these things. With your money.

We believed in sex and drugs and rock and roll.

We were determined to resist “The Man” on all levels.

Many of the most committed socialists and communists among us are still in college and even dumber. We’re professors now and our ability to be dumb has never been deeper.

We are not our parents’ generation, we’re “The Not-So-Great” Generation,

Others of us are ensconced in the various parts of what passes for the media. We’re there with a lot of others just like us and, even if we thought differently, we’d never say it for fear of losing regard, position, grants, or promotion, job, house, family, life. Besides, we’ve been around others who think like us for so long its no problem at all to top up the latte and nod in blind agreement.

Nope, we never sold out. We bought in. But we kept the Che poster pinned up forever in our hearts.

And now, we’ve arrived at our rendezvous with history.

In our aging hearts, we hate what we’ve become and, like any good group of neurotics, transfer that hate to the country that gave us everything including the Long Peace in which to enjoy it.

We’re the first in line to bitch and moan and hate a country that makes our freedom possible. More than that we’re also in love with the always -denied privilege, comfort, money, and safety that makes it possible for us to mouth off without limit. And finally, we’re coming to understand that we are not our parents’ generation, we’re “The Not-So-Great” Generation, and deep down we’re cowards.

We say we’re ‘afraid’ of losing our cherished ‘freedom’ to the jackbooted legions of Trump’s Conservative Brownshirts that seek to stifle our dissent from every street corner. That’s really what a lot of us think. That’s really just how bull-goose looney we’ve become.

We’re so afraid that we can’t look at what scares us but instead pull the covers over our head and dream of the ChristianBoogeymen. Why? Because they’re an illusion. They are not really scary at all. Why? Because they are all “just pretend,” and we know it. What many of us simply cannot face is the real terror of the times… Terror.

We’re really afraid of the wrath of those who, unlike us who believe in nothing, believe in something so deeply that they’ll kill us for it and die doing it.

We fear the bomb in the baby carriage that’s wired to the radio.

We fear the teenager in the Army sweatshirt with three pounds of C4 wrapped inside of two pounds of ball bearings showing up at the Mall for a Big Mac Attack.

We fear the Muslim-American who decides one afternoon to park his Jeep on top of as many of our kids as he can find in a group.

We fear that guy sitting next to the window at 36,000 feet with fuses coming out of his Nikes and a t-shirt on that says, “Just Do It.”

We fear the Immam with a plan who is so tense that he decides to walk into downtown San Francisco and unwind with a small shooting spree.

We like the slogans, books, movies, TV shows, politicians and publications that confirm for us the deep liberal dream that if we are just understanding enough, long enough, apologize for living enough, and offer enough in the way of bribes, the oppressed of the world will come to love us… and then just leave us alone.

As I said, people of my 60s generation are very, very dumb. And, it would seem, we’ve now bred children who are even dumber than we are. We are now, as far as dumb liberalism is concerned, deep into the third generation of the soul dead and the dumb, and it is clear that not a lot of us are coming around soon enough to avoid another massacre on American soil. To paraphrase a slogan about working with heavy machinery, “You get stupid around terrorism and it’ll hurt you real quick and real bad.”

We’re so stupid we’ve even started to believe “It can’t happen here” after it already has.

How can we get off on being “stuck on stupid” when it comes to this First Terrorist War? How can we prevent another”9/11,” “4/20,” “5/14,” “7/4,” “12/25”? Pick a number, any number, there are 365 to choose from. But before that we might want to consider, seriously and carefully, taking some measures which are not merely careful campaigns to ‘bring the fruits of democracy,’ but things that fall, instead, under the general heading of “Draconian.”

You don’t have to look very far to see that while the dumb teenager might be the Terrorist’s first choice when it comes to delivery vehicles, that teenager isn’t the one choosing the target, setting the timer, or buying the bomb. That sort of thing is left to the “leadership” which is far too valuable to expend itself on direct attacks.

Nor do you have to look very far to understand what the goals of that leadership are. You are told what they are in sermon after sermon throughout the Muslim world week after week. But those of my generation who are still mired in the ideological foolishness of their youth cannot hear these words and, even if they did, would not believe them.

My generation’s culture is one where words seldom have any consequences as long as you choose the right ones.  Words, to my generation, are mere poses at cocktail parties at best, the latest glib lyrics of some pot-drenched rock idol who believes that having a hundred voice choir screech out “Impeach the President” is the latest iteration of cool, until the new, cooler president steps forward and administers another slap of pap to the brain.

You see my “people” don’t really get religion unless it comes with a lot of New Age claptrap or a hefty dose of Zen. Pure Christianity or Orthodox Judaism or Islam is far, far outside our ken.

Where previous generations could write, as late as 1927, the sentiments found in the Desiderata:

You are a child of the universe, no less than the trees and the stars; you have a right to be here. And whether or not it is clear to you, no doubt the universe is unfolding as it should.

Therefore, be at peace with God, whatever you conceive Him to be. And whatever your labors and aspirations in the noisy confusion of life, keep peace in your soul. With all its sham, drudgery and broken dreams; it is still a beautiful world. Be cheerful.
Strive to be happy.

My generation was the one that came up with the variation called the Deteriorata :

You are a fluke of the Universe. You have no right to be here, and whether you can hear it or not, The Universe is laughing behind your back.

Therefore make peace with your God whatever you conceive him to be, Hairy Thunderer or Cosmic Muffin.

With all its hopes, dreams, promises and urban renewal, The world continues to deteriorate.

I believe that slab of crap to be The New Commandments of the 60s boomers. The “Bible” of our generation, the National Lampoon, first came up with them. I remember how funny we all thought they were. A laugh riot and, well, so true too. So right on. Words to live by.

But when you get a little further down the road and look back, if you have learned anything at all, you’ll have learned to cherish the sentiment of the Desiderata and despise the mocking nothingness in the Deteriorata. They are not ‘words to live by,’ but ‘words to die by.’

But my generation, being eternally drenched in a mindless nostalgia for its weird youth, refuses to learn that. It believes that the cool answer to the great crisis which has been brought to us in the last years is to make a sign that says ” I still heart New York more without the twin towers,” parade about in their plague infected ideology to say, “Give up.”

When I look at the spectacle that my Boomer generation has made of itself, a generation that had everything going for it, that had every opportunity, and came up with Caramel Soy Lattes and “Impeach the President,”  all I can say is:

“I resign the Revolution. I’m joining the Resistance. The REAL Resistance.”

Next post: Everything New Is Old Again: Upchurch “Everlasting Country”