Long Read of the Week: “We’re Not Going to Talk Our Way out of This” by Titus Quinctius Cincinnatus 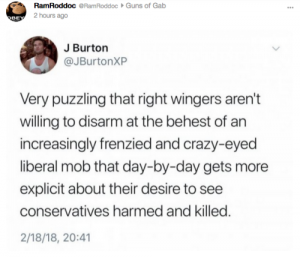 It’s certainly wonderful to think that “all we need to do is find ways to constructively disagree with each other,” and think that this would solve most, if not all, of our problems. But there’s a tremendous difficulty with applying this to the modern ideological divide between Right and Left, the “reactionary” (true or otherwise) and the progressive. The difficulties lie in that this line of thinking implies that there are two sides which actually want rational discussion and a settling of differences rationally. Yet, there are not.

Indeed, what the Left wants is precisely the opposite of this. The progressive Left has not, does not, and never will seek some sort of accommodation with its ideological enemies. Instead, the Left seeks to acquire for itself the institutional and social power to silence its enemies. Ultimately, this proclivity stems from the very nature of what drives the “progressive idea,” which is that the “arc of history” is always bending towards the advancement of what the Left believes is “progress.” Since this trend is inexorable, there is no need, ultimately, to compromise with the Right, merely find various ways to outlast them and hasten their demise. This sort of thinking is responsible for everything from doxxing to the gulags and explains why progressivism is the single greatest evil that this world has ever seen.

At the risk of sounding like a progressive myself, one of the overarching problems with the modern world – which includes the worldview of the “classically liberal, libertarian” soft centre – is that it still holds onto essentially bourgeois attitudes about social and civic participation. These attitudes include notions of fair play, the “marketplace of ideas,” approaching consensus through reasonable discussion and the free and open exchange of ideas, and so forth. To the average American and Westerner, these all sound like pretty straightforward goals.

But they are not goals which the progressive Left shares. Indeed, the Left has absolutely no desire to see a “free and open exchange of ideas” because when that happens, they lose. When stacked against virtually any alternative, progressivism has a horrible track record, and deep down inside they know this. This is why they spend so much effort using institutional power to suppressed dissenters from their orthodoxy. It’s why when they do appear to be engaging with ideological competitors, it nearly always takes the form of screaming about “fascism,” “racism,” or some other slur designed to signal to their fellows the presence of an enemy, much like the moaning of a brain-dead zombie in a horror movie.

From the progressive Left/SJW perspective, there is literally NO advantage to actually having open and honest dialogue with those on the Right about any topic, and especially not with the genuine-but-currently-dissident Right. They know that when they engage us in the “marketplace of ideas,” they lose. All that can happen for them is to see defections from their ranks and to lose their grip on institutional power. So why would they ever accede to an open exchange build about “rules of fairness,” if they don’t have to?

The short answer is, “they won’t.” So why would we ever expect them to?

While I’m sure most readers have already noticed this, people on the Left are generally not very smart when it comes to metrics like “being able to think logically” or “having a broad, well-rounded knowledge base.”

People on the Left – at least the “boss lefties,” not necessarily the random unwashed antifa street drek they use as muscle – are smart when it comes to things like intuiting and using power structures and manipulating public opinion. That’s why well-meaning but ultimately clueless boomer Tea Party types keep getting rolled by them, every time…

Next post: Enough Today of Despair and Decay: “And the light shineth in darkness; and the darkness comprehended it not.”

Previous post: Remus of the Weekly Woodpile Report checks in with this lead