Long Read of the Week: The Fake History of the 20th Century 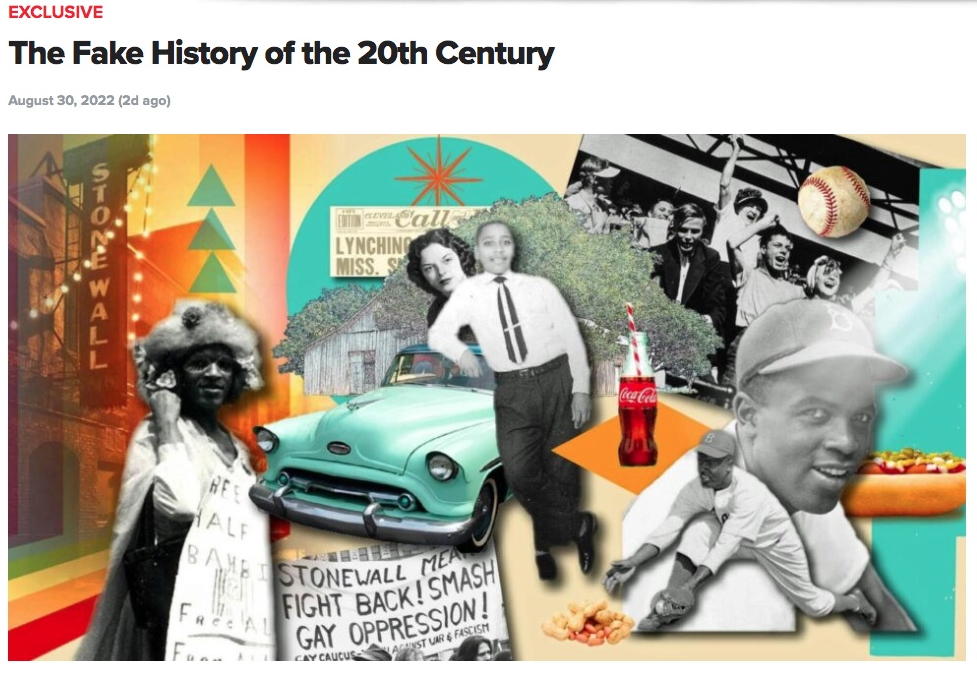 “For Americans desperate to hate their grandparents. . . .”

[The Jackie Robinson hugged by Peewee Reese Myth] wasn’t just a harmless myth. For decades, ordinary people in Cincinnati were tarred as hateful racists in order to further a specific narrative about America. They weren’t the only victims of myths related to Robinson. Enos Slaughter of the St. Louis Cardinals has been villainized for decades for slashing Robinson with his spiked cleats during a play at first base. But Slaughter always insisted the injury was accidental, and sportswriters at the game from both St. Louis and New York City agreed, saying that nothing appeared deliberate about the incident. Similarly, in the 2013 film about Robinson, Pittsburgh Pirates pitcher Fritz Ostermueller is portrayed intentionally hitting Robinson in the head with a pitch before insulting him with a racist comment. In reality, the pitch hit Robinson on the wrist and there is no evidence of such an insult at all.

But all three myths will live on, because they are useful. They promote a certain story about America: That until very recently the country was overwhelmingly bigoted and hateful, and good for very little else. In fact, America’s entire 20th-century history, as it is taught in schools and portrayed on screen, is essentially “fake.” It is a sequence of myths atop myths, created to make Americans hate their ancestors and their history.

A full list of these myths could fill several books. For now, we will illustrate the point with some central examples.

As America steadily replaces pride in its achievements with a new white guilt national ideology, the nation has craved greater atrocities to further fuel a deep sense of shame. Lynchings and segregation were bad, but they lack the electric spark of a Kristallnacht.

For Americans desperate to hate their grandparents, then, the Tulsa Riot of 1921 has become the perfect symbol. Over the past few years, the riot has been promoted with a strange amount of glee. It was used to open HBO’s awful “Watchmen” adaptation, and both the press and President Biden made a major show of the riot’s 100th anniversary last year. Biden’s remarks on that anniversary repeat what is, essentially, the mainstream understanding of events:

[T]he mob terrorized Greenwood [the black neighborhood affected by the riot] with torches and guns shooting at will. A mob tied a Black man, by the waist, to the back of their truck, with his head banging along the pavement as they drove off. A murdered Black family draped over the fence of their home outside. An elderly couple knelt by their bed, praying to God with their heart and their soul, when they were shot in the back of their heads. Private planes dropping explosives, the first and only domestic air assault of its kind on an American city here in Tulsa.

10,000 people were left destitute and homeless, placed in interment camps. As I was told today, they were told, “Don’t you mention you were ever in a camp or we’ll come and get you.” That’s a survivor story. … The death toll records by local officials said there were 36 people. That’s all, 36 people. Based on studies records and accounts, the likely number is much more than the multiple of hundreds. Untold bodies dumped into mass graves.

But as Scott Greer wrote for Revolver last year, every part of Biden’s statement is a gross factual distortion. Even the most exhaustive investigation of the event could only confirm 39 deaths (13 of them white), with the supposed “hundreds” of other victims lacking bodies, causes of death, or even names. There is little evidence of any aerial bombing happening. The “internment camps” were temporary housing for those displaced by the massive fire (apparently they were supposed to just be left without shelter?). Lurid tales of elderly couples executed while praying have remained just that, lurid tales, a kind of racist pornography passed down through the years without any serious effort to verify them. . . . .

In other words, Grisham took an authentic (and in America, disturbingly common) crime, and replaced it with a lurid fantasy that in reality almost never happens. According to the federal Bureau of Justice Statistics, entire years have passed where there are zero white-on-black rapes in America.

RTWT at The Fake History of the 20th Century – Revolver News

Next post: We Regret to Inform You That It Is September