Long Read of the Week (So Far): “They Had It Coming” 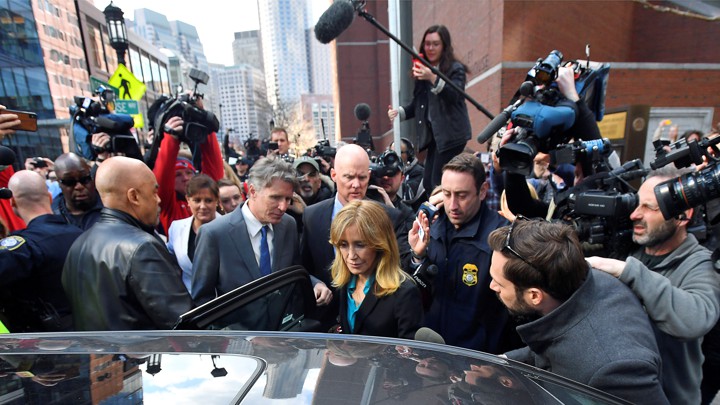 I don’t really remember taking the SATs back in 1962. And I certainly have no idea of my scores. Still, they must have been okay since I got into the University of California and wound up on the Berkeley campus. But if they hadn’t been okay I sure can’t see my father reaching for his highly-limited checkbook and saying, “OK then, what’s the number that will get my kid into that school past all those Asians and other more worthy still people of color.” Instead, I can see him sitting me down at the kitchen table, as he often did, for a full and frank discussion of my failure to attain at least a “B” in everything including woodshop. To paraphrase Dirty Harry, “A man’s gotta know his kids’ limitations.” This fascinating article, written from first-hand knowledge of how demented the parents of kids are, tells the tale of those who just buy kid add-ons until they get the bragging rights they so deeply desire.

They Had It Coming
The parents indicted in the college-admissions scandal were responding to a changing America, with rage at being robbed of what they believed was rightfully theirs. BY CAITLIN FLANAGAN

At every parent coffee, silent auction, dinner party, Clippers game, book club, and wine tasting, someone is bitching about admissions. And some of these parents, it turns out, haven’t just been bitching; some of them decided to go MAGA.

And so it was that at 5:59 on the morning of March 12 in the sacramentally beautiful section of the Hollywood Hills called Outpost Estates, all was quiet, save for the sounds of the natural world. In the mid-century modern house of a beloved actress—a champion of progressive values, as is her husband—and two lovely daughters, everyone slept. But at the strike of 6:00, there was the kind of unholy pounding at the door that must have sounded more like an earthquake than a visitor: FBI agents, guns drawn, there to apprehend … Felicity Huffman? Felicity “Congress is attempting to eviscerate women’s health care. Like many women across America, I am outraged” Huffman? For the crime of … paying to get her daughter an extra 400 points on the SAT? Down, down, down she went in the FBI car, in her handcuffs and athleisure, down below Outpost, down below Lake Hollywood, down below the Dolby Theatre where she had been so many times—in a beautiful gown, with her famous husband, William H. Macy, beside her—to watch the Academy Awards, once as a nominee. All the way down to—my God!—the downest place of all: Spring Street. The federal courthouse! This was where Donald Trump was supposed to go, not Felicity Huffman. …

Thirty years ago, having tapped out of a Ph.D. program, I moved to Los Angeles (long story) and got hired at the top boys’ school in the city, which would soon become co-educational. For the first four years, I taught English. Best job I’ve ever had. For the next three, I was a college counselor. Worst job I’ve ever had.

I just about got an ulcer sitting in that office listening to rich people complaining bitterly about an “unfair” or a “rigged” system. Sometimes they would say things so outlandish that I would just stare at them, trying to beam into their mind the question, Can you hear yourself? That so many of them were (literal) limousine liberals lent the meetings an element of radical chic. They were down for the revolution, but there was no way their kid was going to settle for Lehigh.

RTWT @ What the College-Admissions Scandal Reveals – The Atlantic