Long Read of the Week: I. Don’t. Care. by Jack Donovan 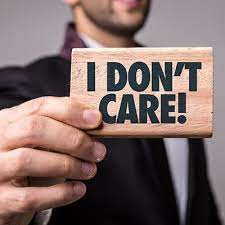 These three magic words could end so many arguments.

Most appeals in the name of social justice rely on an underlying assumption of universal altruism. They assume that you care if something bad happens to anyone, anywhere, and advise you to take some sort of action to ease or prevent their suffering.

Once you’re arguing, they’ve already got you.

Once you’re arguing, you’ve agreed that you could care, or would care –that you should theoretically care – given satisfactory evidence and argumentation.

But what would they say if you stopped pretending to care at all?

There would be no point in arguing about the details.

Of course, as normal humans, we can always imagine ourselves in another human’s position. We can empathize with others –that’s what makes movies and novels work. But we can’t really care about the suffering of every single man and woman on the planet. The idea that we should is insane and inhuman. So much of what people say they care about is just emotional pornography that can springboard them into an acrobatic display of moral and political posturing.

I see all of this propaganda online telling me what is NOT OK, and how I am supposed to feel about strangers and other groups of people. If they get me to agree that I care about these strangers and their unhappiness, I’m supposed to accept responsibility for that unhappiness and do whatever I can to alleviate it.

Some kid in Africa probably got his head sawed off with a butter knife while some chick named Shoshana experienced the nightmare of catcalling in New York City. No one cared, because they weren’t told to care. Given their perceivable social class and sex, the guys who were expressing their admiration for Shoshana have probably experienced far more brutality than being propositioned for sex. And no one cared when it happened. Shoshana is just the squeaky wheel who wants to be lubricated with your tears.

If we really cared about everyone, we would never even register feelings or microaggressions or First World problems because our brains would be blown out from watching Third World ultraviolence. We’d be watching and liking and sharing nonstop videos of prison rapes and basement executions and reading stories about sex slavery and child prostitution. We’d be OUTRAGED at the injustice of it all, 24 hours a day, 7 days a week.

Those things are happening right now and they have more or less been happening at varying levels for all of human history.

The reason that people care about the same thing at the same time — whatever today’s outrage or viral video is — is that we have all have to pick and choose. We decide, if not consciously then by our choices, that one person’s suffering is more important than another. Who we — or maybe you, because I’m not talking about me here — decide to care about is almost completely arbitrary. Whatever human tragedy passes our eyes or ears.

I don’t care what happens to everyone, everywhere.

I don’t care what happens to strangers.

It’s an admission that sounds barbaric and unspeakably taboo.

It’s taboo because people have been conned into believing that they are supposed to do something they can NEVER do — care equally about everyone, all around the world.

I care about what happens to my friends and my family and my tribe. I care, and even at this point, I am using care very loosely, about the kind of people I generally like, respect, or support. People who are like me, or who are like the people I like.

When someone registers an opinion or tells me I am supposed to care about something, if I am even thinking about caring, I look them up. I ask myself if I would be interested in what this person had to say if they were sitting in the same room with me.

Sometimes, I would. Usually, I would not. I probably wouldn’t even have a drink with them, or give them a single moment of my time.

If they’re telling me that something bad happened to them, I have to admit that in most cases I probably don’t care. Why should I care about the suffering of this stranger instead of that one?

If they’re telling me that I should change, I ask, “why?,” and if the only answer is to theoretically prevent the alleged and future suffering of some other group of people I don’t know or care about… then… my answer is: “Why bother?”

I’ll change to some extent to gain honor in the eyes of men I respect, personally or in the abstract, but why would I change to prevent the unhappiness of some stranger?

This idea that we are all each other’s shepherds, that we are all responsible for the happiness of all humankind, is paralyzing nonsense. At best, it keeps men busy arguing about things over which they have almost no control. At worst it makes men vulnerable to all sorts of manipulation by people who have already decided that they are disposable rubes — like naive retirees giving away their savings to charity grifters or high-living evangelists. Men end up giving away everything worth having to people who are ideologically incapable of even acknowledging their sacrifice.

I’m not encouraging people to stop caring about anyone, I’m encouraging them to stop trying to care about everyone. If you say you love everyone, you don’t really love anyone. Love is a choice, a discriminatory act.

If you don’t pick your team — if you aren’t willing to draw a line between who you care about and who you don’t, between “us” and “them” — then you’ll be like all of these other suckers who care about whoever and whatever they click on every morning.

And if you don’t really care, then say it.

The idea that we are all in this together and are working in good faith to solve the world’s problems is an illusion that traps us in a crisscrossed, impenetrable web of synthetic yarn. If you pull that fuzzy pink string — that completely unwarranted assumption of universal goodwill — civil society collapses into a Hobbesian war of all against all where no one trusts anyone.

When free from our attachments to everyone, everywhere, we find ourselves adrift in a staggering, confused mass of drooling and covetous humanity, we can make sense of it all and find our bearings only when we form discriminatory alliances and new tribes built on trust, common interests and mutual admiration — instead of being bound by the great lie of love for all neighbors.

I. Don’t. Care. by Jack Donovan

Next post: Strange Daze: Where never is heard a contrary word and the skies are not cloudy all daze.