Long Read of the Day: The Kenosha Shootings / Kyle Rittenhouse: A Tactical and Legal Analysis 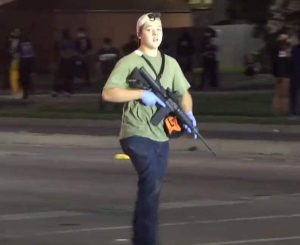 [EXCERPTED] By now the majority of you will have seen or heard of the pair of engagements in Kenosha, Wisconsin (hereinafter the “Engagements”) between one Kyle Rittenhouse and a number of other individuals, some recently departed, others now unfortunately unable to operate a keyboard with any efficiency, particularly when proper capitalization is required of their typewritten text. In the wake of these encounters, it is quite something to see the degree of bad information, misinformation, and disinformation that has showered the socialinterwebsitetubes, particularly from a tactical and legal perspective.

On the tactical side, it is surprising that matters seem so distorted, since the Engagements must rank among the most comprehensively filmed deadly force CQB incidents in some years (and one of the only engagements in recent memory involving an AR system). In fact, despite the poor lighting conditions, the mobile nature of the camera operators (none, to my knowledge, trained combat photographers), and the chaos of small unit action that will be familiar to anyone who has been in the midst of it, it is possible to view the most cogent parts of the engagement in vivid detail, from multiple camera angles, and with stereo sound. On the legal side, well, many new expert commentators may lack a formal law degree, but they did stay at a Holiday Inn Express (7887 94th Ave, Pleasant Prairie, Wisconsin, 53158) and probably ordered several on-demand Better Call Saul episodes the night before the Engagements besides.

The tall individual wearing the hoodie, a blue cap, glasses, an olive drab, perhaps camouflage-patterned backpack, faded jeans and a red-accented face mask clutching a skateboard I have tentatively identified as one Anthony Huber, 26, of Silver Lake, Wisconsin. In 2012 Mr. Huber pled guilty to Felony “Strangulation and Suffocation” (with a Domestic Abuse modifier) and Felony False Imprisonment (with a Domestic Abuse and Use of a Dangerous Weapon modifier). Four other charges apparently from the same incident or incidents ranging from misdemeanor to felony level were dismissed. Mr. Huber received 3 years probation for his guilty plea. From the records available to me it appears that Mr. Huber violated his probation in 2016 and a sentence of 2 years (with a year credit) in State Prison was order, but it is unclear if this was a technical or material violation and if Huber was actually incarcerated for the violation. The shorter, bald individual in the red short-sleeved shirt wearing [denim]? capri pants and white shoes with ankle-high white socks (this short, bald subject hereinafter the “Short Bald Subject” for brevity) MAY be is Joseph D. Rosenbaum, 36. Rosembaum is (was) subject to a life-long sex offender registration order in Wisconsin for his Arizona conviction on two counts of Sexual Conduct with a Minor in 2002. Sentenced to 10 years in prison, he appears to have been incarcerated in Arizona from 2002 until paroled in 2012. He apparently violated his parole by tampering with a monitoring device in 2014 and may have been incarcerated thereafter. During his incarceration he racked up dozens of corrections institute disciplinary violations for offences including Assault with a Weapon, Assault on Staff, Arson, and Possession of Narcotics.

It is difficult to be certain, but it appears from the video that the two individuals, Short Bald Subject and Huber, are acquainted, if not acting in concert.

Both appear to aggressively challenge the group “protecting” the Ultimate establishment, but Short Bald Subject is much more confrontational. He verbally berates the defenders: During the two Engagements Rittenhouse was presented with a series of “shoot/no-shoot” situations. While it is difficult to be certain about the number of shots fired by Rittenhouse in the first Engagement, as near as I can tell he fired his weapon only when cornered or on the verge of being in a close physical contest with assailants larger and apparently stronger than himself. If anything he seems to have been too hesitant to fire in the first encounter. Absent a headshot at extreme close/near contact range (a very low probability shot in intense CQB) Rittenhouse likely would have been overcome by prison-hardened and clearly aggressively disposed Short Bald Subject.

…Don’t rely on firearm discharges or pointing to deter opponents determined to close distance with you.

Not that you needed reminding, but rifle stopping power is far superior to handgun stopping power. All three subjects Rittenhouse scored clear hits on were out of the fight immediately. One (Grosskreutz) melted down even though he had ample means to continue the fight. Grosskreutz is only alive today because of Rittenhouse’s amazing (perhaps even naive) restraint. I don’t know of any tactical instructor that wouldn’t counsel a follow-up shot to center mass on Grosskreutz immediately after the arm-strike.

If attacking an individual armed with a firearm do not flinch no matter what. If you commit to grappling with a rifle or pistol holder you have to see your attack through. Four larger, assailants, one armed with a blunt instrument (skateboard) and one with a handgun were unable to subdue a nearly prone Rittenhouse because they shied from the muzzle blast at key moments. Had Grosswreutz followed through with his initial charge after the fatal center mass hit on Huber, Rittenhouse would likely have been subdued.