Long Read of the Day: Fighting ISIS With the B-2 Bomber by William Langewiesche 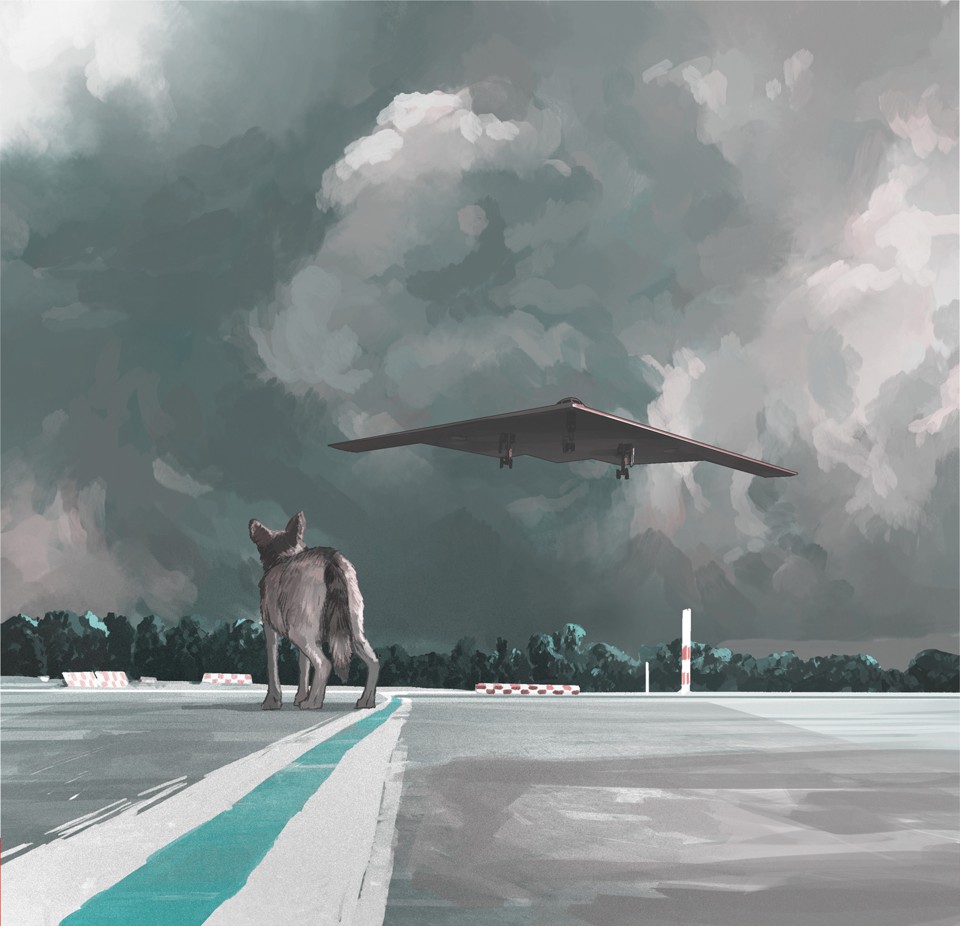 The B-2 stealth bomber is the world’s most exotic strategic aircraft, a subsonic flying wing meant to be difficult for air defenses to detect—whether by radar or other means—yet capable of carrying nearly the same payload as the massive B-52. It came into service in the late 1990s primarily for use in a potential nuclear war with the Soviet Union, and clearly as a first-strike weapon rather than a retaliatory one. First-strike weapons have destabilizing, not deterrent, effects. It is probably just as well that the stealth bomber was not quite as stealthy as it was meant to be, and was so expensive—at $2.1 billion each—that only 21 were built before Congress refused to pay for more. Nineteen of them are now stationed close to the geographic center of the contiguous United States, in the desolate farmland of central Missouri, at Whiteman Air Force Base. They are part of the 509th Bomb Wing, and until recently were commanded by Brigadier General Paul W. Tibbets IV, whose grandfather dropped the atomic bomb on Hiroshima. B-2 bombers are still primarily regarded as a nuclear-delivery system, meaning that their crews are by selection the sort of men and women capable of defining success as a precisely flown sortie at the outset of mass annihilation. No one should doubt that, if given the order to launch a nuclear attack, these crews would carry it out. In the meantime, they have occasionally flown missions of a different sort—make-work projects such as saber-rattling over the Korean peninsula, and the opening salvos in Serbia, Afghanistan, and Iraq—to tactical advantage without American discomfort.

Such was the state of affairs in the small hours of the morning at Whiteman on January 17, 2017, during the last days of the Obama administration. Six years had passed since any B-2 had flown in combat. But now, in the privacy of their bespoke, climate-controlled, single-occupancy hangars, several of them had been loaded with 80 GPS-guided bombs for use against enemies who had been spotted on the ground in a faraway country. The preparations had been hushed: Relatively few people on the base, even among those assembling and loading the bombs, knew that this was something other than a training run.

In the B-2, the only inhabitable space is the cockpit, and the flight crew consists of merely two people. Though they are cross-trained to perform any role in flight, the one in the right seat is the mission commander, who handles the weapons and military communications, and the one in the left seat is considered the pilot, who performs the lesser tasks of flying the airplane and dealing with air traffic control. On that January morning, all of the crew members were mid-ranking men and graduates of advanced B-2 training at the United States Air Force Weapons School, in Nevada. The airplanes had been fawned over for days by ground crews, but in fine aeronautical tradition the responsibility for their condition lay ultimately with the pilots. They loaded their gear into the cockpits, gaining access by climbing a short ladder and pulling themselves up through a hatch in the floor. They then performed a traditional walk-around, followed by extensive system checks and flight-plan entries. This took about 90 minutes. No problems were discovered. They closed the cockpit hatches, strapped into their seats, and while still in the hangars started their engines. Each B-2 has four jet engines—not clunky cylinders but turbofans embedded sleekly in the wings, like gills in a shark, so as to limit radar, infrared, and acoustic signatures. The engine start is automated—a push-button affair that requires monitoring but rarely fails.

Once the engines had started, the B-2s emerged in unison from their hangars and pivoted to form a single-file line. A low overcast blackened the sky. The air was cold and moist—conditions conducive to engine-induction icing while the plane is idling on the ground, one of several weather-related weaknesses from which the B-2 suffers as a result of the uncompromising purpose of its design. Because of the potential for icing, the pilots were eager to get their ships into the air. Spaced 500 feet apart, the B-2s taxied briskly toward the top of the runway—an array of wings with no fuselages, no tails, and no vertical stabilizers, barely recognizable as airplanes except for their hefty landing gear and the whine of their hidden engines. The first three took off 30 seconds apart and were swallowed by the night. The others, which had been spun up in case the primary aircraft experienced problems, taxied back to their hangars and shut down. When I later expressed surprise at this level of redundancy, one of the pilots explained that it had been necessary to ensure the bombs would be released at the chosen time: within the first several seconds of January 19, 2017. The timing seemed so arbitrary that I asked about the reasoning behind it. My question was amateurish, and the pilot did not appreciate it. “I was not privy to those discussions,” he said. “I just go when they tell me to go.”

For the next 30 seconds, the bombs came at them with demonic accuracy. Each 500-pound bomb was set to detonate just above its target for maximum lethality, operating more through overpressure than fragmentation. The resulting vacuum condition sucks air from the lungs while the shock wave pulverizes bone and ruptures or liquefies the internal organs of anyone within about 50 yards. That is how most of the isis fighters died: hugging the earth to no avail as their innards turned to mush and the night was ripped apart by the explosions.

For the handful of survivors, the ordeal was not yet over. The dust had hardly settled when the Reaper drones moved back in, looking for squirters. Figures could be seen in real time, running frantically. With their Hellfire missiles, the Reapers began picking off anyone spotted trying to get away. Killing with Hellfires is very different from killing with GPS-guided bombs. It requires the Reaper crews to get personal, laying a laser device on magnified images of each individual victim and then watching the missile as it strikes. A Hellfire missile has a blast radius of 50 feet and a “wounding radius” of up to 300 feet. It could kill hundreds of people as easily as it could kill one. Once the Hellfires had mopped up, the only sound in the desert was the hum of the Reapers’ engines…..

RTWT AT: William Langewiesche: Fighting ISIS With the B-2 Bomber – The Atlantic

Next post: Q — The Plan to Save the World

Previous post: MEMEAZINE: “I like winning so much I think I’ll go back for a second helping…”