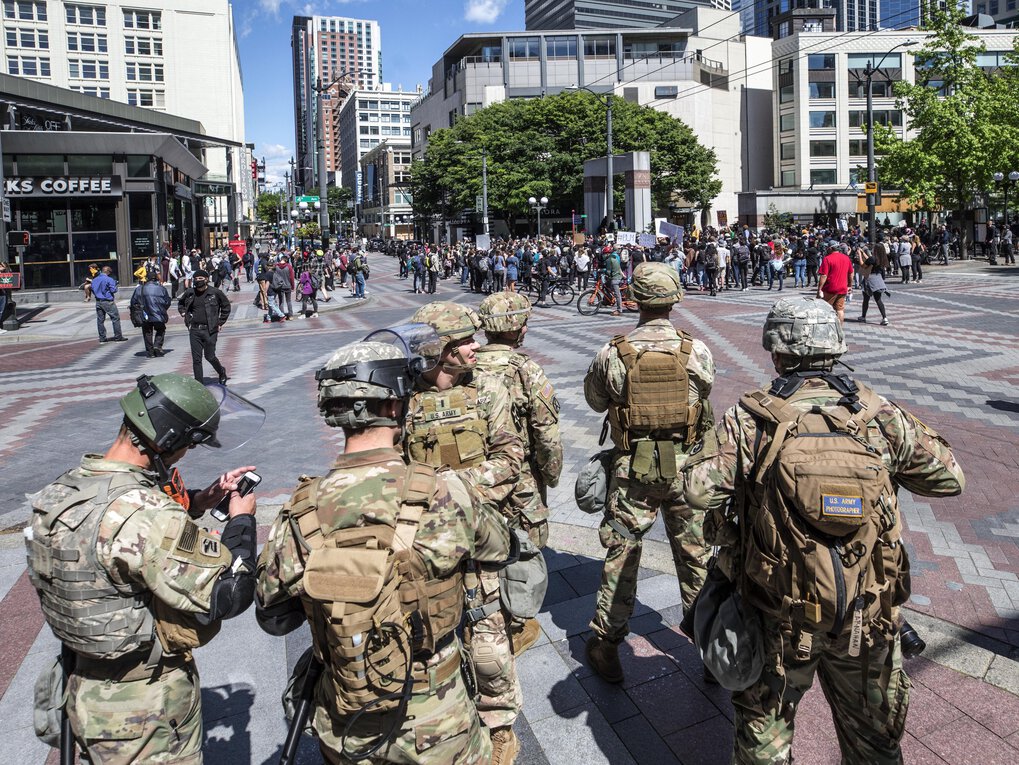 On that first day, they continued to try to provoke a response from the Officers and the Guardsman. NO ONE PROVIDED A RESPONSE. I was on the line, near the center right. I remember a plastic water bottle being thrown across the line by the “protesters” on my right side towards a Police Officer. Soon after, a bottle landed on the left side, right behind our line. I yelled out “SHIELDS UP!” Without hesitation, our ENTIRE LINE of Guardsman moved forward, and placed ourselves between the rioters and the Police Officers.

The “protesters” began throwing rocks, glass bottles, and chunks of concrete. I was out there ALL day. There wasn’t any construction going on. There wasn’t a pile of concrete or bricks anywhere to be seen. All I saw were younger people with heavy backpacks. THEY WERE GRABBING CHUNKS OF CONCRETE FROM THEIR BACKPACKS TO THROW AT US. Why is that important? Why would you carry chunks of concrete to a protest? Because you PLAN on using/throwing the concrete… When the concrete began to rain down on us, it came from ALL directions. What does that mean? It was COORDINATED. THEY PLANNED TO ASSAULT US WITH CONCRETE. I didn’t realize until later, but I have to tell you… it really pissed me off when I thought about the situation I had just experienced. As they were throwing these items, the Officers tried to protect us by using less-lethal means (OC/CS/etc). NO LETHAL FORCE WAS USED. Could the Seattle Police Department use lethal force in that situation? Absolutely… a chunk of concrete to the head can KILL someone…

What NO ONE realizes, because the media is bias as hell, at least three police officers were injured that day before SPD used less-lethal means to de-escalate the situation. One Officer took a chunk of concrete to his right eye… last I heard, he’s expected to LOSE his eye. I retrieved a video from that confrontation with the “protesters.” You can see items flying towards us as SPD deploys OC (pepper spray). Notice the second use of OC, the long burst? That was over my right shoulder next to my head. I got some OC contamination from that, which was okay because I was trained for it… The crowd continued to throw concrete. At least two pieces of concrete hit my shield. I later took a picture of my shield, WHICH WAS BRAND NEW, to show the extent of crap being thrown at us.

SPD then deployed CS gas. We had planned for this possibility, telling the squad on deck to come relieve us after they put their mask on. Unfortunately, that didn’t happen. As CS was deployed, the crowd began to throw the CS canisters back towards us along with more concrete. I couldn’t put my mask on since I would have had to drop my shield to do so. I was currently protecting SPD Officers and I wasn’t going to allow the Officers behind me to get hurt. So, as Guardsman were pulled off the line by other Guardsman and SPD, I HELD MY GROUND. I’ve been through the CS gas chamber with the U.S. Army, but this was so much worse. I stood there, trying to breathe for as long as I could.

At one point, I looked forward, and saw a female pointing a black pipe towards me. My thought in that moment: “You’ve got to be kidding me… they’re using potato guns too?!” As she turned to her right, I noticed it was a leaf blower. A “PROTESTER” brought a leaf blower to blow CS gas towards us… (It’s not like they were anticipating that, right?!) As the clouds of CS were parting due to her efforts, I saw a male… wearing a black hoodie, with the hoodie up, a bandanna, black pants, and a black backpack, in a throwing position. I watched as he threw a large piece of concrete (at least 5” x 5”), that was shaped in a triangle, directly at me. As it hit my shield (notice the white impact mark on the picture), I thought to myself… if I was armed, I would have shot him… The cloud of CS overtook me. As I struggled to breathe, I looked to my left and NO ONE was there. I looked to my right and saw only ONE OTHER SOLDIER. I began to fall back as a sea of navy blue rushed forward. SPD and the Washington State Patrol to the rescue! I returned to a rally point, dropped my shield, put on my gas mask, and began helping other soldiers that had been out on the line. As the smoke began to clear, I took a couple photos to remember this moment and the anger that flooded my emotions.

Next post: Time for All of Our Soldiers to Come Home