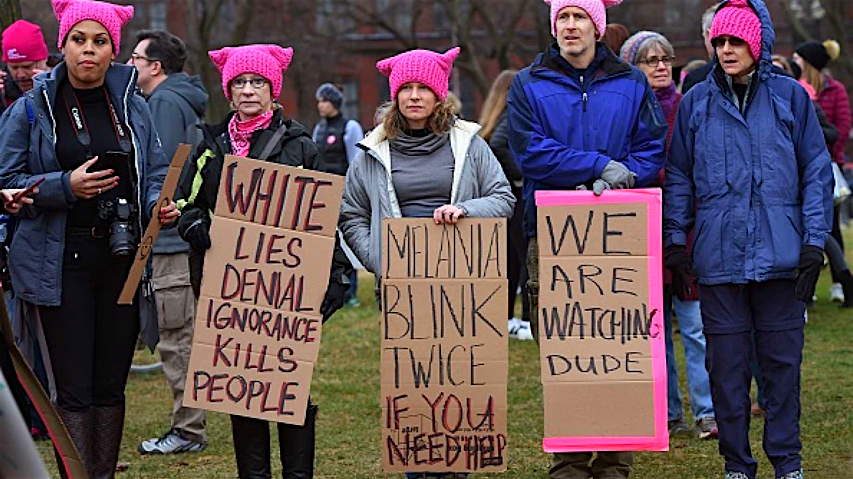 As the full, hideous picture comes into focus, you curl into a ball, whimpering, asking yourself over and over: Did that really happen?

That’s how we feel about 2017. It was a year so surreal, so densely populated with strange and alarming events, that you have to seriously consider the possibility that somebody — and when we say “somebody,” we mean “Russia” — was putting LSD in our water supply. A bizarre event would occur, and it would be all over the news, but before we could wrap our minds around it, another bizarre event would occur, then another and another, coming at us faster and faster, battering the nation with a Category 5 weirdness hurricane that left us hunkering down, clinging to our sanity, no longer certain what was real.

Take “covfefe.” Remember? For a little while, it was huge. Everybody was talking about it! Covfefe! But then, just like that, it was gone. What the hell WAS it? Did it even really happen?

And were there really thousands of people marching around Washington wearing vagina hats?

And did the Secretary of State really call the President of the United States a “moron?”

And did the president (of the United States!) respond by challenging the Secretary of State to compare IQ tests?

We want to believe that we imagined these things. But we fear we did not.

There’s one thing we definitely remember happening in 2017: the “fidget spinner” fad. This was huge, and for a good reason: It was extremely stupid. In terms of mental stimulation, fidget-spinning makes nose-picking look like three-dimensional chess. You mindlessly spin the thing around and around, accomplishing nothing. It’s an idiotic, brain-cell-destroying waste of time.

Meanwhile the big emerging journalism story is the Russians, who, according to many unnamed sources, messed with the election. Nobody seems to know how, specifically, the Russians affected the election, but everybody is pretty sure they did something, especially CNN, which has not been so excited about a story since those heady months in 2014 when it provided 24/7 video coverage of random objects floating in the Pacific while panels of experts speculated on whether these objects might or might not have anything to do with that missing Malaysian airliner. You can tune into CNN anytime, day or night, and you are virtually guaranteed to hear the word “Russians” within 10 seconds, even if it’s during a Depends commercial.

This focus continues in …

… when Washington is consumed by Russia Mania, to the point where the panels of expert speculators on CNN are being fed intravenously on-air so they don’t have to take even a moment’s break from speculating about all the alleged things that the Russians have allegedly been up to. Adding fuel to the fire is FBI Director James Comey, who tells a hearing of the House Committee on Holding Hearings that the Russians definitely were involved in the 2016 election and currently control the Department of Commerce, the Coast Guard and as many as eight state legislatures.

For his part, President Tweet declares — and Fox News confirms — that the allegations that Russia helped him are FAKE NEWS and furthermore the Russians had numerous contacts with Democrats, including Barack Obama, the Clintons, Chuck Schumer and Nancy Pelosi. This raises the question: If all these Russians were over here making contacts and interfering with our elections, who the hell was running Russia? Poland?