“Live Not By Lies” — Alexander Solzhenitsyn 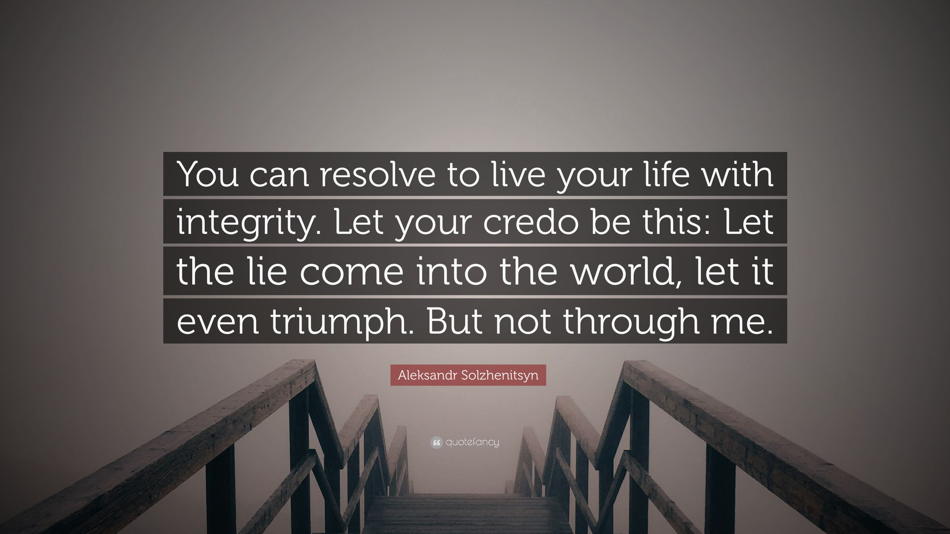 The simplest and most accessible key to our self-neglected liberation lies right here: Personal non-participation in lies. Though lies conceal everything, though lies embrace everything, but not with any help from me.

This opens a breach in the imaginary encirclement caused by our inaction. It is the easiest thing to do for us, but the most devastating for the lies. Because when people renounce lies it simply cuts short the lies’ existence. Like an infection, they can exist only in a living organism.

We do not exhort ourselves. We have not sufficiently matured to march into the squares and shout the truth our loud or to express aloud what we think. It’s not necessary.

It’s dangerous. But let us refuse to say that which we do not think.

This is our path, the easiest and most accessible one, which takes into account our inherent cowardice, already well rooted. And it is much easier—it’s dangerous even to say this—than the sort of civil disobedience which Gandhi advocated.

Our path is to talk away from the gangrenous boundary. If we did not paste together the dead bones and scales of ideology, if we did not sew together the rotting rags, we would be astonished how quickly the lies would be rendered helpless and subside.

So in our timidity, let each of us make a choice: Whether consciously, to remain a servant of falsehood—of course, it is not out of inclination, but to feed one’s family, that one raises his children in the spirit of lies—or to shrug off the lies and become an honest man worthy of respect both by one’s children and contemporaries.

No, it will not be the same for everybody at first. Some, at first, will lose their jobs. For young people who want to live with truth, this will, in the beginning, complicate their young lives very much, because the required recitations are stuffed with lies, and it is necessary to make a choice. Alexander Solzhenitsyn — Live Not By Lies

Previous post: “When Men Get Bored: ” Forging A Pizza