The Brainiac of Congress

What an important victory for the people of Minnesota!

This is what happens when communities come together to oppose mining projects that will line the pockets of fossil fuel execs at the expense of our planet. https://t.co/H1iHhGbuLm

Obergruppenfuhrer wannabe and Bernie Sanders key staffer in Iowa, Kyle Jurek, got arrested a few days before the Project Veritas sting video where he loudly boasted about mass murdering and imprisoning those who will not submit to the will of Landru or Lenin, on an array of charges including drunk driving. But wait! There’s more! The little darling was bailed out of jail and there is no comment from the Sanders campaign on where the money came from and who sprung him. The Morning Report – 1/17/20

What to Expect During the Senate Impeachment Trial     As a former Secretary of the Senate — the Senate’s chief legislative, financial, and administrative officer  it’s painful to hear pundits and so-called legal experts misinform people. Much of the disinformation and errors seem to be coming from CNN (surprise!) and, of course, the Twitterati. I’m happy to help set the record straight.

Anybody know what the deal is with gay men and the formality they seem to prefer in names? Maybe your experience is different, but every gay man I have ever known – and remember, I lived in San Francisco just off Castro Street for several years – wanted to be called Robert, or Michael, or James. Never Bobby, Mike or Jimmy. A notable exception would be Pete Buttigieg. Though, I suppose if you are a gay man and Butt is already part of your name, adding Peter to the mix would be a bridge too far. Thoughts from the ammo line | Power Line 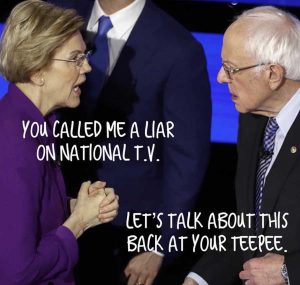 Why I think the media organizations are in really big trouble:  How can major news organizations sustain their operations with a declining viewership that’s less than a mid-size popular podcast?  To make my point, let’s compare one I really like, Mark Dice, and CNN (because I’m from Atlanta) with clown Don Lemon. Don Lemon is CNN’s second highest-rated show, and he averages ~800k viewers per show; yes, you read that right.  Compare that to Mark Dice, who has 1.53mm subscribers on YouTube.  In a 5-10 minute video, he’ll get between 150k and 500k viewers, and sometimes even upwards to a million.  This is with Dice swimming upstream against content suppression and YouTube manipulating view counts.  CNN continues to pay airports.  Dice provides funny commentary on real stories, while CNN provides commentary on fake stories.

Democrats Block Resolution Condemning Iran For Murdering Protesters, Shooting Down Plane |  “Consideration and a vote on House Minority Leader Kevin McCarthy’s resolution was blocked … by a vote of 226-191,” The Daily Caller reported. “The resolution would have condemned the Government of Iran for killing 1,500 Iranian citizens who were protesting their government, as well as condemned the Government of Iran for shooting down Ukraine International Airlines Flight 752, killing 176 people.”

Judge Dooms Jussie Smollett, Orders Google To Hand Over His Records To Special Prosecutor |    A Cook County judge has ordered Google to turn over Jussie Smollett’s emails, photos, location data and private messages for an entire year as part of the special prosecutor’s investigation into the purported attack on the actor.

NBC News looks beyond the physical to examine all the pains felt by men having their periods Does it count if I laughed so hard I got a cramp?

Information Removal: A Strategic Approach For someone who is just starting out on this endeavor, I believe there is a more organized and time-saving way to approach the removal process. Below I will describe an overview of how I approach this project. The links may change over time, but the methodology will likely save you a great deal of time and enable you to accomplish more of your effort more quickly. The following list is also not all inclusive. It represents a calculated approach, targeting specific websites, in a specific order to help streamline your removal efforts. A more comprehensive list is constantly maintained at the following link and should also become referenced as you find yourself getting deeper into this project. https://inteltechniques.com/data/workbook.pdf

Today, in Los Angeles, shade is distributed to people who can afford it. If you go into neighborhoods that were designed to be wealthy residential enclaves, the sidewalks are wider and include strips of grass four to ten feet wide, for the easy planting of thick, leafy trees. Pershing Square, for example, used to be full of shade trees. But after a new underground parking structure destroyed the root system, the thick, dense tree canopy was replaced. Other parks lack trees because of a strategy Bloch has reported on called crime prevention through environmental design. In LA, there is an idea that increased visibility in public spaces will lead to higher levels of public safety. In several instances, it’s believed the LAPD has installed pole cameras in parks or in public housing projects and cut down mature trees to give the camera a clear sightline. Shade – 99% Invisible

Mine was/is 521 B Allen Ave. The Past Is Never Dead Until I was nine years old, I lived in Los Angeles, just a few miles from the LA Coliseum. I still remember the address: 1711 W. 60th Street. Isn’t it weird that I would remember that address? I haven’t lived in that house for 72 years, yet there it is, 1711 W. 60th Street, a permanent little memory in my brain, probably occupying space that I might have used all these years for other things. My home was located in one of those quintessential LA neighborhoods you see in movies every now and then, a row of palm trees in front of little pastel-colored stucco bungalows. I visited there a few years ago and the neighborhood looked exactly the same. Apparently, time doesn’t pass when you’re a little pastel bungalow in LA.

Warren and the Burden of Motherhood For her, and for the droves of liberal feminists she represents, being a mother isn’t worth the investment of a life. Women should not invest themselves in the lives of their own children. Instead, the virtuous investment is to use taxpayer money to place all small children in institutions.

Let’s Stop Pretending Bernie Sanders Wants to Duplicate Scandinavia ”A real-life proof of concept for a successful democratic socialist society, like the Lost City of Atlantis, has yet to be found.”