Livestream by @Omarisal showed the chaos in the moments after the shooting at CHAZ. “Street medics” tried to render aid before the victim(s) was transported to hospital by private car. Responding Seattle Police were blocked from entering to investigate.https://t.co/VzAPFOjT7J pic.twitter.com/jGa4IHUAHJ

During five undercover days and nights in the zone, I witnessed a continuing experiment in anarchy, chaos and brute-force criminality. In order to avoid being exposed as a journalist — several reporters have been barred or expelled – I slept and showered outside the zone. (Those inside have no showers but they do have portable bathrooms.) I took meals, and most of my water breaks, elsewhere because I was reluctant to remove my mask and risk being recognized. Every day I entered the zone twice through its semi-porous borders — once in the early afternoon, and again after sundown, staying until the wee hours.

Crime has surged inside and outside the zone.

On Saturday morning, a shooting erupted that left at least one person dead and another injured near a border checkpoint. Police were reportedly met with resistance when they tried to get to the victims, who apparently were then taken in private cars to the hospital. Cops made it into the zone to gather shell casings and evidence, some reports said, as police in riot gear stood at the border.

On Thursday, police arrested Robert James after he left the CHAZ. He is accused of sexually assaulting a deaf woman who was lured inside a tent. The same day, former city council candidate Isaiah Willoughby was arrested on suspicion of starting the arson attack on the East Precinct June 8.

Police Chief Carmen Best has stated that police response times to 911 calls in the surrounding area have “more than tripled” because they are down a station.

Various Occupy-type protests have occurred across the US since the original occupation near Wall Street in 2011. But CHAZ is nothing like the mostly peaceful tent city in privately-owned Zuccotti Park that was corralled and closely monitored by the NYPD….

Despite the group’s link to violent extremism, its armed members were celebrated in the CHAZ for “protecting” the new denizens. The head of CHAZ’s security is a short female named “Creature.” She and the rest of her team communicate with walkie-talkie devices and earpieces. Some of them openly carry rifles, handguns, batons or knives. Their operating base is in the open-air eating section of the Ranchos Tacos Mexican restaurant. Signs posted all over their base declares: “NO PHOTOS. NO VIDEOS.” Another sign lists Venmo names for donations.

For media crews that arrive during the day, that is certainly what they will see. People have barbecues in the street. Many bring their children to make street art. People walk their dogs.

But at night, a whole different side of CHAZ emerges. 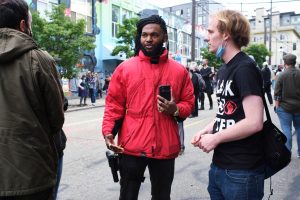 hose who have naturally risen to the top have done so with force or intimidation. For example, rapper Raz Simone, real name Solomon Simone, patrols CHAZ on some nights with an armed entourage. Simone, originally from Georgia, has an arrest record for child cruelty and other charges. He usually conducts his patrols carrying a long semi-auto rifle and sidearm. Last weekend, a live stream recorded Simone handing another man a rifle from the trunk of a car.