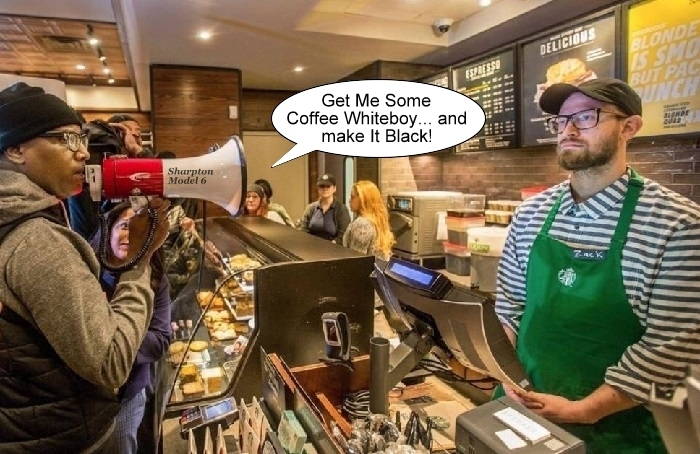 Never Yet Melted: Starbucks Now a Free Homeless Facility: Starbucks, in other words, has just announced its stores are not stores primarily, but are now privately-funded shelters and bathroom facilities for the homeless. You don’t have to spend a slim dime in the store to sit as long as you please and use the bathrooms.

‘Reparations white lady”! Black Guy Demands Free Coffee At Starbucks And Gets It!

How many Einsteins per Africa? It turns out that these assumptions predict an upper bound of 301 Einsteins per future Africa and a most likely figure of almost exactly 1 Einstein per future Africa.
Amid the inevitable chaos and degeneracy  – including a dramatic fall in maths and reading scores, and a rapid rise in assaults and classroom thuggery, up to and including actual riots â amid all this, critics of the policy are smeared as racists, while “white privilegeâ guilt” hustling is made mandatory. And while terrified teaching staff console themselves with free emergency whistles.

Raconteur Report: Time To Get Down To The Rat Killin’ The reason Los Angeles and Cook counties (L.A. and Chicongo) have 51% of the murders in the entire country is that they are concentrated deposits of human refuse, with Democrat city governments, and shoddy, corrupt under-policing of those same protected (mostly) Diversity candidates, in most cases with the same 1-3% of the population committing 99% of the crime.

Doll Love That Never Happened aka The Fairy Tale of Race One working mother of three told me about when, while visiting a predominantly white private school, her daughter sat in with some current female students—all of them white—who were playing with baby dolls. Her daughter, upon entering the room and noticing that the girls weren’t playing with the lone black doll, scooped it up, exclaiming, “Oh my goodness! Look at this beautiful black baby and her beautiful black skin!” The doll quickly became the center of attention, and the mother told me that in the coming weeks the school ordered additional black dolls to reduce disputes among the students who clamored over the original one. She told me it was her proudest moment as a mother.

Ghosts of Africa – The conventional wisdom is that giving Africa geographic pride of place in human evolutionary history proves the genetic equality of Africans and Eurasians. In reality, the out-of-Africa theory implies that the main racial gap in humanity is between Africans and everybody else, which is not what you are supposed to believe (although many Americans today act, not unreasonably, as if they do believe it and kind of like it).

How is it that Countries Die??? | Venezuela comes to mind. “We are middle income!” they might have said to themselves, tuning out the ever-shrill warnings against their ridiculous political experiment. “We are an established democracy,” they probably continued, – “And now that we ‘arrived’, I know, I have an idea!!! Let’s kill ourselves! Let’s starve our babies! Let’s lay waste to our roadways and bring down our buildings, let us shutter our factories. Let’s pluck out our eyes and plunge ourselves into darkness deep and penetrating; and yes, let’s destroy our joy – because it is imperfect and, dare we say, unequal!!” All this to the deafening applause of the grievance-seers and their minions of envy.

Next post: Flag’s At Half Mast: Probably The Most Disgusting Photo On The Internet Right Now