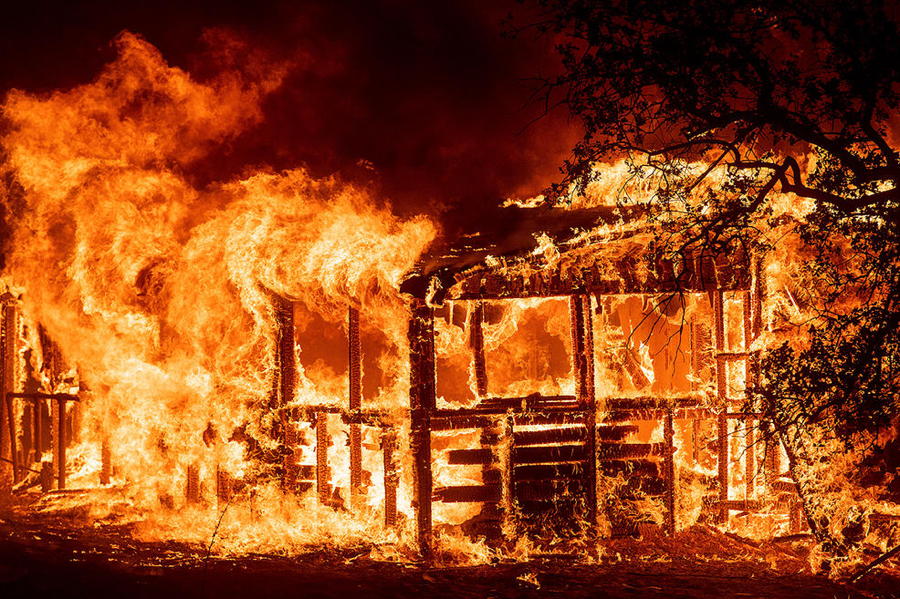 Devil’s Broom: The Fire That Inspired a National Network of Lookout Towers The Great Fire of 1910 is believed to be the largest fire in US history, earning it nicknames including the “Big Burn,”  the “Big Blowup” and the “Devilâ’s Broom Fire.” It swept through millions of acres in northwestern states including Washington, Idaho and Montana. Ships that were hundreds of miles out at sea had trouble navigating due to the haze. People as far east as New York reported seeing smoke. Close to a hundred people died in the fire, including some firefighters.

Waiting For The Spark | It is tempting to think this will all blow over. I was in the camp until recently. Now, I just don’t see how it will ever be possible to make peace with the Left. They hate us and will use any means necessary. The lack of code is the critical part. How does one make peace with someone that will never abide by the rules? Whether this results in revolution, ccounter-revolutionor civil war is hard to know, but the number of people thinking the gap cannot be bridged is growing every day. Now we wait for the Cossack’s wink. 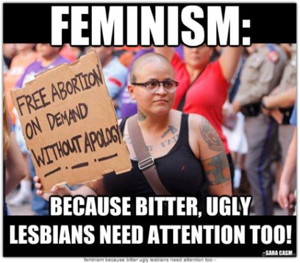 Never will you hear the Progressive say “this is good enough, we can stop now.” For them, there is always a new impurity to eradicate. The movement is like the terminator of movie fame:

Kyle Reese: Listen, and understand. That terminator is out there. It can’t be bargained with. It can’t be reasoned with. It doesn’t feel pity, or remorse, or fear. And it absolutely will not stop, ever, until you are dead.

Social Justice is like the terminator in other ways, too. It cloaks itself as one of us. It wears the skin of our institutions in an effort to disguise itself. But always, its mission is to eradicate us. We are the impure. We cannot be permitted to exist. And when a round of impure are disposed of, new impure are found. Today, it is Rightists. Tomorrow, Centrists. The day after that, Trotskyite Leftists. The Terminator never stops. Ever-greater demands of purity are made. Like the Third Reich, the gas chambers never stop. The ash falls from the skies, forever. At least until someone puts a stop to it all at gunpoint.

While I am delighted that #metoo is devouring those who funded it and sponsored it I know perfectly well that every notable #metoo allegation is a malicious lie, for the targets are always the men whom women very much want, wealthy and powerful men, and the accusers are mostly washed up narcissistic whores that men no longer want â the accusations are directed against those men who are most likely to be sexually contacted by women in a sexually aggressive manner, and the accusations come from those women who are most apt to sexually contact men in a sexually aggressive manner. 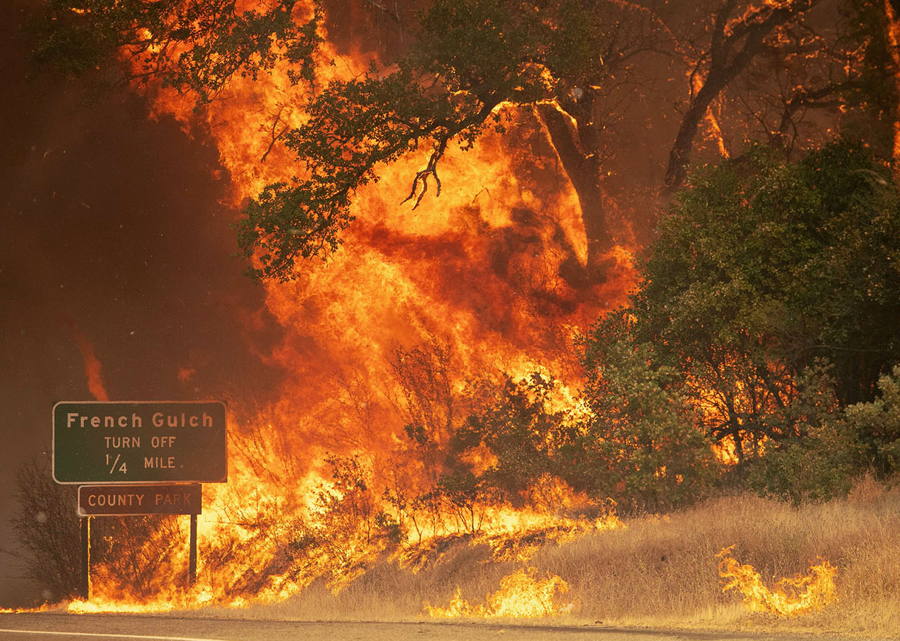 A power pole leans over a burned property as the sky turns a deep orange during the Carr fire near Redding, California on July 27, 2018. – Two firefighters have died and more than 100 homes have burned as wind-whipped flames tore through the region. (Photo by JOSH EDELSON / AFP) (Photo credit should read JOSH EDELSON/AFP/Getty Images)

THIS JUST IN: Texas Constructs Border Wall To Keep Out Unwanted Refugees From California

Load up on batteries because it might be nice to hear music sometimes. You’ll miss it. Simple vocals and melodies though, not the studio pop songs. Those will strike you as absurd after a month of not hearing one. Get some acoustic instruments, teach yourself to play and sing. Grab a paper road atlas from a store. Get guns, bows and arrows, knives, lighters and matches, clothes and boots, first-aid supplies, and canned food. Canned food can be good for up to six years, but you’ll learn to hunt and farm by then. Deer will be everywhere. 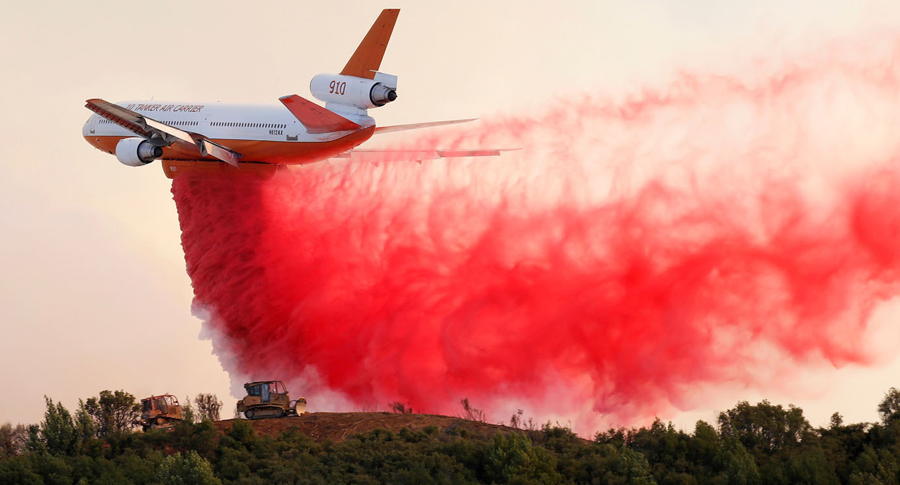 A DC-10 air tanker drops fire retardant along the crest of a hill to protect the two bulldozers below that were cutting fire lines at the River Fire (Mendocino Complex) near Lakeport, California, U.S. August 2, 2018. REUTERS/Fred Greaves TPX IMAGES OF THE DAY – RC1E638CF950

The Infantilization of Black America Well-meaning white progressives, meanwhile, treat black Americans more like the family pet than the family friend, condescending to praise us when we align with their views, and ferally attacking when we don’t. The conversation about race in America has been framed by progressive media and co-opted by the Democratic party to supplement the coalition that supported Obama during his presidency — presumably in the hope that blacks would gratefully support Hillary in her run for office. But Democrats have come to take the black voting bloc for granted — even though 44 percent of black voters consider themselves moderate and another 27 percent consider themselves conservative, black Americans still overwhelmingly vote Democrat (90 percent).

A burnt out boat sits at a marina on Whiskeytown Lake after damage from the Carr fire near Redding, California, on July 30, 2018. – Thousands of firefighters in California made some progress against several large-scale blazes that have turned close to 200,000 acres (80,940 hectares) into an ashen wasteland, destroyed expensive homes, and killed eight fire personnel and civilians in the most populous US state. (Photo by Mark RALSTON / AFP) (Photo credit should read MARK RALSTON/AFP/Getty Images)

The insanity in Venezuela is rippling across the region. The spiraling but barely reported violence in Nicaragua, for example, is at least partly a result of the Sandinistas–more Socialist darlings–no longer able to count on receiving cheap Venezuelan oil. Haiti, too, is experiencing unrest for the same reason. I am not sure what is happening on this score with Cuba, but there could be effects there, too. While I will shed no tears for troubles suffered by the Sandinistas or the Castro klan, the instability in Venezuela could have effects in, thus far, more stable places, such as Colombia and Brazil, as the Venezuelan migration river turns into a torrent, and the regime becomes increasingly belligerent.

Nation Wonders “Who The Heck These People Are With Enough Free Time To Scour The Internet For Old, Offensive Tweets.”

The Unconscious Girds for War The next morning, I awoke from an intensely vivid dream in which, suffused with cold calm wrath, I deliberately, carefully took aim at a Social Justice Warrior *and killed her.* That was a shock. It was a dream of war; of civil war. The setting was a battle, indeed a mêlée. But in that noise and chaos and confusion, I was clear in my head, perfectly controlled, and deadly. I take it as self-evident that something deep in me has changed, and is now rehearsing war. I read lately that many men like me have recently suffered the same heave of paradigms. It’s an ugly thing. What’s interesting is that it feels “curiously healthy,” as being correct, more truly fitted to things as they are. It feels like settling down into a better understanding of life, which is always something of a relief. 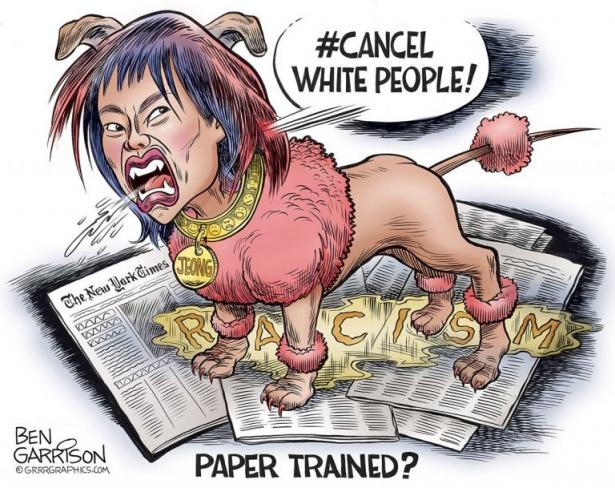 Welcome to Bad Faith This is what comes of sending a young person to Berkeley and Harvard these days, where they are given super-extra brownie points for dumping on white people, and men especially. The insane diktats of the faculty get funneled from the ivory tower straight into the “Newspaper of Record,” and so it is on the record now that nobody can trust The New York Times to analyze world and national affairs in good faith, in particular on matters of race and gender. The paper’s old motto, “All the News That’s Fit to Print,” has changed to “Anything Goes and Nothing Matters.”

Senate Democrats Are Circulating Plans for Government Takeover of the Internet: All your base are belong to us. A leaked memo circulating among Senate Democrats contains a host of bonkers authoritarian proposals for regulating digital platforms, purportedly as a way to get tough on Russian bots and fake news. To save American trust in “our institutions, democracy, free press, and markets,” it suggests, we need unprecedented and undemocratic government intervention into online press and markets, including “comprehensive (GDPR-like) data protection legislation” of the sort enacted in the E.U.

The nuclear option will self-detonate when a “war with China” reaches critical mass in the eyes of Americans. They will shun three little words on billions of items for sale in the USA: “Made in China”. Like all nuclear options, collateral damage will be horrendous, but Americans are Americans and they will not go down easily. Editorial: China will not surrender to US threatening tactic – People’s Daily Online

As a gay man, what if your right to marry is suddenly taken away? Doesn’t that anger you on a primal level?

That is suggesting that I believe in identity politics, and that I vote with my penis. It’s suggesting that immigration, the economy and other policies matter so much less than whether I can marry a man. It’s not something that I worry about, or is on my mind. That’s the problem with identity politics, and it’s what got Hillary into trouble. If you have a vagina, you had to vote for Hillary. This has seeped into a bedrock credo among a lot of people, and you’ve gotta step back. People are not one-issue voters. I am not going to vote as a gay man, and I don’t think the idea of us not being allowed to marry is going to happen. Pence has his issues, but Trump is not an anti-gay president in any way, shape or form. I also have gay friends who support and voted for Trump, based on certain policies. It’s not just about being gay and being able to marry.

Not a day goes by without Democrat politicians and media ranting that President Trump is failing to protect us from Russian attacks. The return of the Second Fleet is an example of how Trump is doing just that. It doesn’t take the military to protect Democrat email accounts from hackers. The DNC could have spent 20 bucks on physical security keys for its people, instead of on lavish dresses for Debbie. A single one of Debbie Wasserman Schultz’s dresses would have paid for 200 security keys. 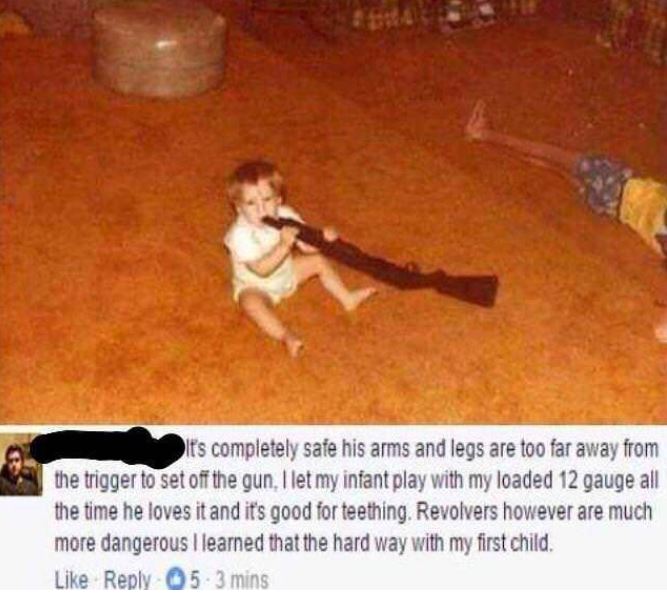