Marooned Among the Polar Bears This ice is two feet thick, radiant blue, pitted and roughened by at least two years of melting and refreezing. The weight of the suit makes it impossible to hurl his legs over the jagged lip. Yet he keeps trying, searching for the right spot at which to hoist himself up, like a toddler trying to climb out of the deep end of the pool. The sharp ice scrapes away skin. Blood runs down his forearms and into the sea. He finds a smooth section, presses his bare chest flat against the ice, uses his nails as claws, and shimmies atop.

No business, no boozing, no casual sex: when Togo turned off the internet In the end, the shutdown was overwhelming stressful and negative. It was like living in a open prison: you could not reach out to your loved ones and they could not reach out to you, because someone had decided so, and was actively enforcing it against your will. Our lives have moved online to the point where an internet blackout is like a high security prison. It’s not because one could have more time to read books when in prison that we should hail prisons. The Long Night Ahead | The REAL danger facing a world interconnected by social networking isn’t disruption. As we have seen on numerous occasions, the danger posed by disruptive information and events is fleeting. Disruption, although potentially painful in the short term, doesn’t last, nor is it truly damaging over the long term. In fact, the true danger posed by an internetworked world is just the opposite of disruption. This danger is an all encompassing online orthodoxy. A sameness of thought and approach enforced by hundreds of millions of socially internetworked adherents. A global orthodoxy that ruthless narrows public thought down to a single, barren, ideological framework. A ruling network that prevents dissent and locks us into stagnation and inevitable failure as it runs afoul of reality and human nature.

Anglin can’t accept even the token compromises at a site like Gab, so he goes to war with it. This ensures that his followers never stray from the ghetto that he has created for them. It also means potential recruits have a reason to ignore him. This does not mean the alt-right is condemned to having fat guys in their tighty-whities, dancing around at their events. To avoid that fate, they need to produce leaders with the credibility to swat down guys like Anglin, when he gets out of control, but also aware of the fact that growing the movement means appealing to the general public. That means softening the pitch and making some compromises. They don’t have anyone capable of doing that at he moment, but they better find some. How To Sell Soap 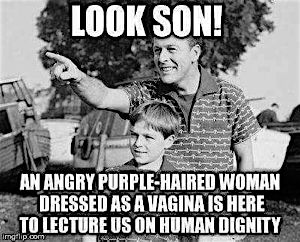 The spiritual center, in which no religions are allowed, was a charming, quiet space that was for strictly non-religious thoughts and devotions (well, except for the workers, who appear to be foreign, darker complected, and bring these small mats in to kneel on and chant in a certain direction). In any case, no religion by the patients is allowed. There are several full color pictures on the walls of a very famous piece of art, where a man on crossed timbers is immersed in a swirling, bubbling, yellow-orange liquid that perfectly captures the feeling of Utopia. TO THE ALT-RIGHT AND BACK AGAIN; A CAUTIONARY TALE @ The Burning Platform

An Insider’s View: Preparing for Prison |  Forget the holding cell under the court and the journey locked in the tiny sweatbox cubicle. It will be the moment that you are in your first cell when the heavy metal door is slammed shut for the first time and you realise that there is no handle on the inside that you really come to understand that you are now a prisoner.

Maybe Just Don’t Drink Coffee – Sure, just the other day, you bought some incredible single-origin nanolot coffee beans, and that half-pound bag cost as much as two, maybe three avocado toasts. In fact, you bought enough to keep some at home and at work. It’s a legit varietal, like Gesha or Bourbon, from a remarkable local roaster who operates quasi-legally out of a sick loft and specializes in light—but not too light!—roasts, a respectful homage to modern Scandinavian coffee that lets you really get a sense of the bean’s terroir, down to the GPS coordinates where it was discovered during an expedition into coffee country led by a white man of great taste, and the barista said that the acidity from this coffee is “really wonderful and fruit-forward, like Hawaiian Punch micro-dosed with LSD.” Finding North America’s lost medieval city At the city’s apex in 1050, thepopulation exploded to as many as 30,000 people. It was the largest pre-Columbian city in what became the United States, bigger than London or Paris at the time. Its colorful wooden homes and monuments rose along the eastern side of the Mississippi, eventually spreading across the river to St. Louis. One particularly magnificent structure, known today as Monk’s Mound, marked the center of downtown. It towered 30 meters over an enormous central plaza and had three dramatic ascending levels, each covered in ceremonial buildings. Standing on the highest level, a person speaking loudly could be heard all the way across the Grand Plaza below.

Ride Along with the Cow Police Looking at the longhorn, the idea of stealing a cow seemed ridiculous. When I voiced this to Goodman, he pointed out that as a form of stolen property, cattle is actually unusually lucrative. Unlike a pawnshop, which typically pays pennies on the dollar for stolen goods, a barn will pay fair market price, less a standard four percent commission. “You steal six good-sized heads?” Goodman said. “At ninety cents a pound, you’re pulling in at least five thousand dollars. Not a bad paycheck for a night’s work. It makes sense. If you’re a criminal.”

The destruction of buildings and artworks, which ISIS has perpetrated at the ancient site of Palmyra among other places, has several twentieth-century precedents. Vladimir Leninâs Bolsheviks razed churches and synagogues in Russia. Mao Zedong demolished large parts of Chinaâs architectural inheritance and most of Tibetâs, while the Pol Pot regime wrecked pagodas and temples and aimed to destroy the countryâs cities. In these secular acts of iconoclasm, the goal was to abolish the past and create a new society from âyear zeroââan idea that goes back to âyear oneâ of the calendar introduced in France in 1793 to signal the new era inaugurated by the French Revolution. Systematically destroying not only pre-Islamic relics but also long-established Islamic sites, the aim of ISIS is not essentially different.  The Anomaly of Barbarism Dog Days of Youth – He was a fishing dog, and one of the first things I taught him that July was to tow a yellow minnow bucket in his mouth through the shallows while I threw the cast net for mullet. He ate every minnow I couldn’t grab—and put on a summer sheen that drew all kinds of compliments. He was lip-hooked more than once with flounder rigs, oyster-cut so much that red paw prints dotted the dock, walkways, and floor for years. He bailed out of the pickup bed twice and lapped up whole Fry Daddies full of fish grease multiple times. And he wowed onlookers as he filled out and grew—sleek and long, blocky and rippled like a panther with those light-colored eyes that might’ve belonged to a Chesapeake.

Why New York is Better Than San Francisco – My heart does somersaults like a baby golden retriever whenever I see somebody do the old-school deli-coffee shake: take it to the curb, invert the coffee in its flat-topped paper cup (preferably with that Greek-esque we are happy to serve you design treatment), and shake it to make sure the gross quantities of sugar and milk that have been added to it are properly distributed. Dispatches from the Rap Wars When CBE started rapping in 2012, Murderville made a song insulting a young man named Benzie, one of the first CBE members to get killed. (CBE would go on to rename their neighborhood Benzie Block, using the hashtag #BenzieBlock on social media.) CBE decided they needed to retaliate. It was a defining moment. The guys drove into Murderville territory and started shooting up the neighborhood. They didn’t hit anyone, but a few days later, someone from CBE spotted the rapper who had recorded the song taking a selfie on the street and shot him in the back.

Chapter 1; The Cries from the Churchyard – The Baby in the Plastic Bag He runs a few meters onwards, in through the doors of the office located at the rear of the church. There are people inside! Thank goodness. “I’ve just found a newborn baby in a plastic bag! It’s been hidden in a bush down in the churchyard! Someone needs to call for the police and an ambulance!” he stutters.

Clarity and the Written Record | Debating the causes of what’s happening is part of keeping a record, just as doing what can be done to arrest it. One has to have hope that the fever will break, but if it doesn’t and we continue on the current path, documenting the insanity of our age is an important part of the fight. We may lack a Cicero to shape the way in which we think of our age, but Julius Caesar and Mark Antony are not showing up either. In an age of mediocre tyrants, we’ll have mediocre chroniclers of our age. Keeping a record is all that can be done.

And furthermore I consider that Islam must be destroyed.

Next post: It’s A Beautiful Day in the Neighborhood by ghostsniper