Jupiter Rising: If only our earthly cameras would evolve until they could bring UFOs into focus 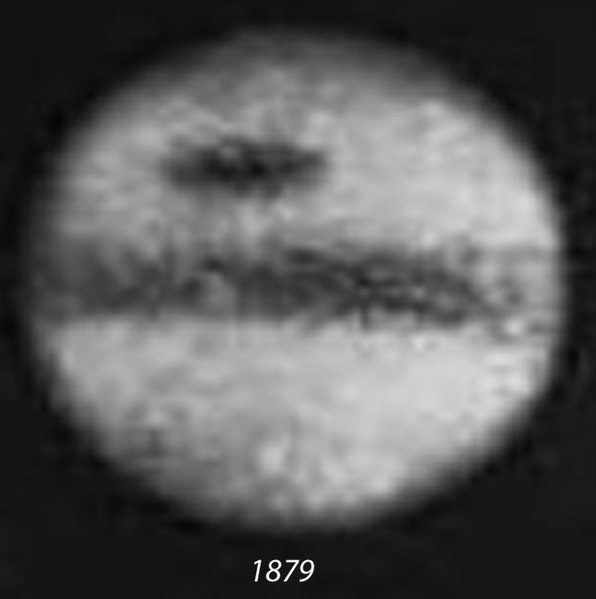 Photograph of Jupiter’s enormous Great Red Spot in 1879 from Agnes Clerke’s Book “A History of Astronomy in the 19th Century”. Captured by Andrew Ainslie Common in Ealing, London on 3 September 1879 using a 36″ reflector, this was the first clear photograph of another planet.

Captured on July 27, the 2022 infrared images — artificially colored to make specific features stand out — show fine filigree along the edges of the colored bands and around the Great Red Spot and also provide an unprecedented view of the auroras over the north and south poles.

One wide-field image presents a unique lineup of the planet, its faint rings and two of Jupiter’s smaller satellites — Amalthea and Adrastea — against a background of galaxies.

“We’ve never seen Jupiter like this. It’s all quite incredible,” said planetary astronomer Imke de Pater, professor emerita of the University of California, Berkeley, who led the scientific observations of the planet with Thierry Fouchet, a professor at the Paris Observatory. “We hadn’t really expected it to be this good, to be honest. It’s really remarkable that we can see details on Jupiter together with its rings, tiny satellites and even galaxies in one image.” 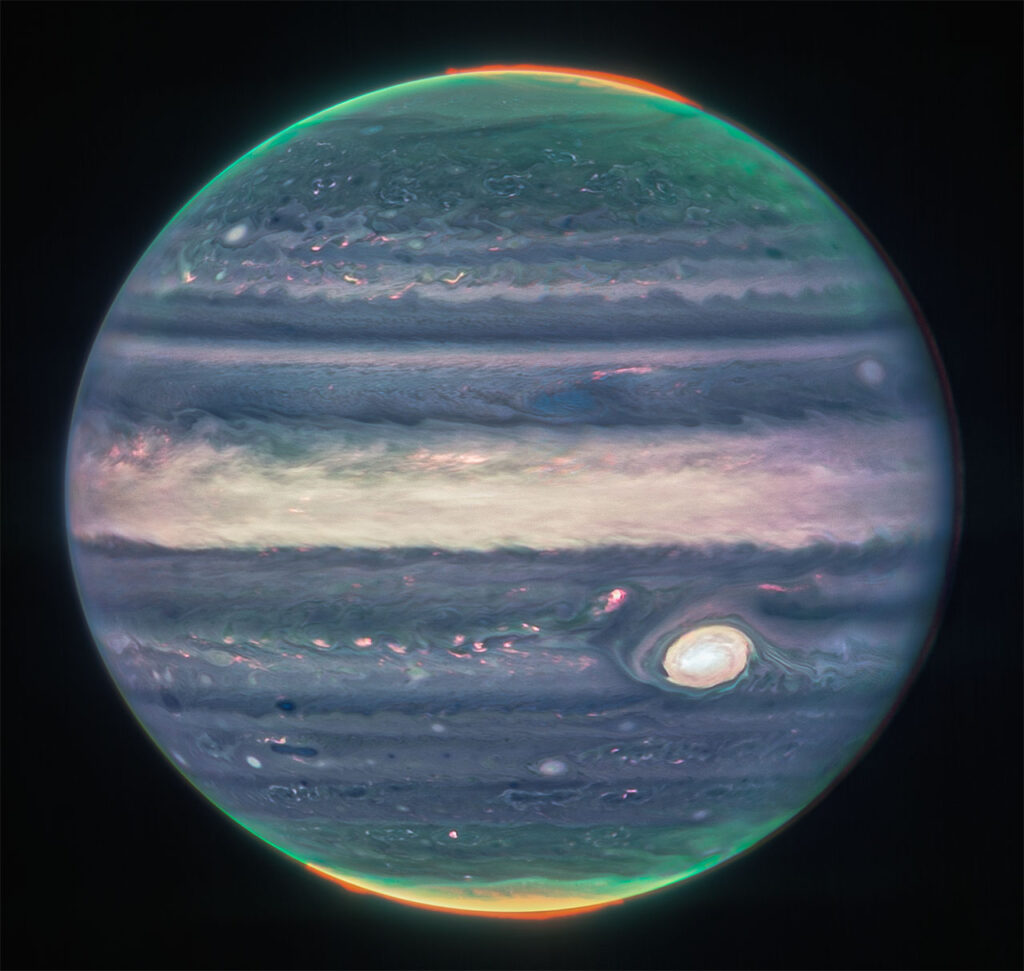 Jupiter Color Composite: This false-color composite image of Jupiter was obtained with James Webb Space Telescope’s NIRCam instrument on July 27, 2022. Several exposures in three different filters were assembled to create this mosaic, after being corrected for the rotation of the planet. The combination of filters yields an image whose colors denote the height of the clouds and the intensity of auroral emissions. The F360M filter (mapped to the red-orange colors) is sensitive to light reflected from the lower clouds and upper hazes. The red features in the polar regions are auroral emissions, caused by ions excited through collisions with charged particles at altitudes up to 1000 km above the cloud level. Auroral emission in red is evident in the northern and southern polar regions and reaches high above the limb of the planet. In the F212N filter (mapped to yellow-green colors), the gaseous methane in Jupiter’s atmosphere absorbs light; the greenish areas around the polar regions come from stratospheric hazes 100-200 km above the cloud level. The stratospheric haze that appears green in this composite is also concentrated in the polar regions, but extends down to equatorial latitudes and can also be seen along the limbs (edges) of the planet. The cyan channel holds the F150W2 filter, which is primarily sensitive to reflected light from Jupiter’s deeper main cloud level at about one bar. The Great Red Spot, the hazy equatorial region and myriad small storm systems appear white (or reddish-white) in this false-color image. Regions with little cloud cover appear as dark ribbons north of the equatorial region. Some dark regions — for example, those next to the Great Red Spot and in cyclonic features in the southern hemisphere — are also dark-colored when observed in visible wavelengths. 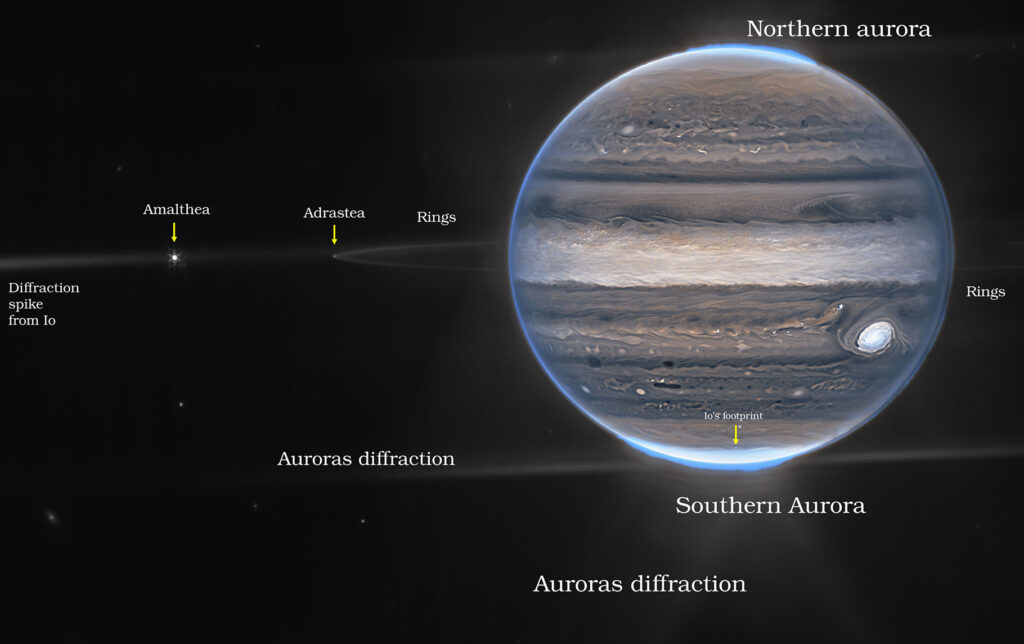 Jupiter System: This false-color composite image of Jupiter was obtained with James Webb Space Telescope’s NIRCam instrument on July 27, 2022. A combination of short and long exposures in F212N (mapped to an orange color) and F335M (mapped to cyan) show Jupiter’s rings and some of its small satellites together with background galaxies. Amalthea (~250 x 150 km across) and tiny Adrastea (~20 km across) are visible in this image. The diffraction pattern created by the bright auroras, as well as the moon Io (just off to the left, not visible in the image), form a complex background of scattered light around Jupiter.

Next post: Reading Auden. Who Is Introducing Kierkegaard. To Me. Over Fries and a Chocolate Malt. At Big Al’s.