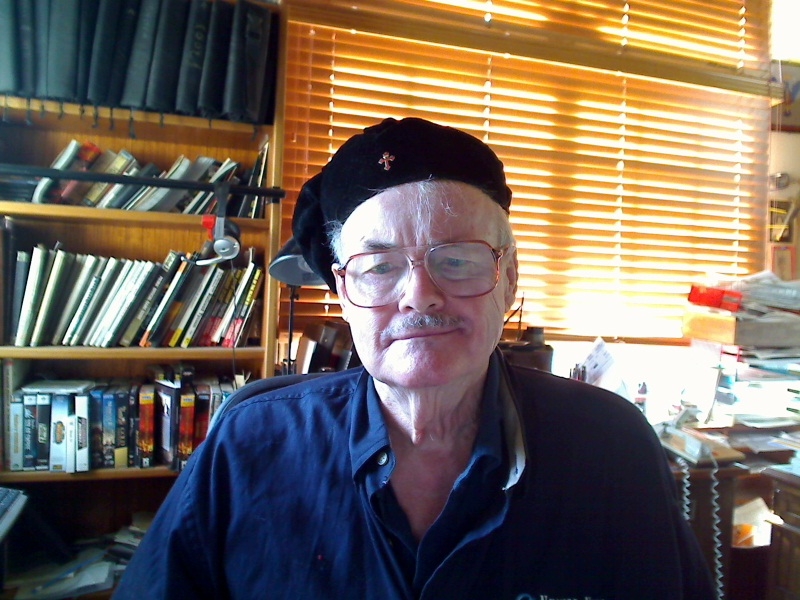 It’s hard to sum a person up that you know only from their books and their blog, but more and more that’s what the world requires. I first came across Pournelle in his Byte Magazine column back in the years when my first computer was an IBM metal cased monster with a dual floppy drive boasting a green cathode monitor hooked up to an insanely loud dot matrix printer. For an internet connection in during that Techno-Stone Age I used an RCA dumb terminal with a 300 baud modem that made a sound like what crack could feel like hitting your backbrain. I got it for ten bucks new in the box at a garage sale because nobody, including me, knew what it was.

In those days I knew nothing, but I knew enough to buy a magazine on computing. That would have been Byte which, in the early years, had few pages that were intelligible to me. One of those was Pournelle and his monthly rendition of his adventures in computing; adventures which alway put my fumbling aggravations with computers to shame. In Pournelle’s world at Chaos Manor  his computer foo was far beyond mortal computer foo. His foo was epic. Indeed his column’s stock and trade was his endless diddling and dicking around with hardware or software, and why it was always going haywire. Chaos Manor was the Fibber McGee’s closet of computing. He’d no sooner get one computer or system up and running than he’d blow it all up by adding a component here and upgrading some software there. Nothing, but nothing, ever ran smoothly for long in Pournelle’s “Chaos Manor.” And they kept not running smoothly right up until the end because Pournelle could never let any of his computers and systems just be.

He was a man’s man and a writer’s writer. And he was very good at it.

On top of it all the man was a polymath who crammed a dozen careers into one life. Among many firsts, Pournealle was the first author to write a novel on a computer

In a recent history, Track Changes: A Literary History of Word Processing by University of Maryland Associate Professor of English Matthew G. Kirschenbaum says that Pournelle “has a strong claim to having been the first author to have written published fiction on a word processor.” Pournelle acknowledged that “It’s generally conceded that I wrote the first published book written on a computer.”

Pournelle worked right up to the last moment. He signed off his last daily blog entry with an insight into the Dreamers – Chaos Manor – Jerry Pournelle with a typical and sane solution the continuing immigration woes. To wit:

Any volunteer of any age who serves 7 years overseas in Army or Marines gets a Green Card and an application to apply for Citizenship along with his honorable discharge. The Citizenship application and test need not be very difficult and I would expect all who applied to pass it. The swearing should be public and conducted by an officer of rank Colonel or above.

As to girls, we can think of something similar or suitable; they need not join the combat arms. Surgical Assistant comes instantly to mind.

Their parents are a more difficult problem, and it will take ingenuity to find a path that does not offend the legal immigrants who obeyed the law.

The next day the world learned:

I’m afraid that Jerry passed away.
We had a great time at DragonCon.
He did not suffer.

Pournelle’s science-fiction gave us not some dystopian world of endless despair but a gleaming future where the human race survives and thrives — splendidly — out into the far stars.

Now he is starlight.