It’s probably nothing #2: CORONAVIRUS – Chinese doors are being welded shut for quarantine

Don’t panic but be the kind of frood who always knows where his towel is.[See below page break  to review the uses of the universal tool that is the humble towel.] 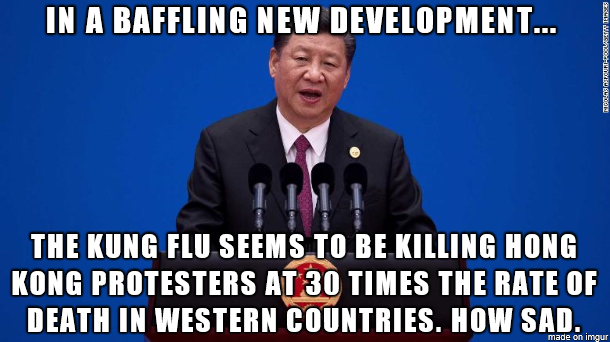 Via Raconteur Report: Nothing To See Here

Rule in the Time of Coronavirus AKA Springtime for Hitler

Xi Jinping may also be thinking of it as an opportunity. Remember that Xi is part of political party that killed an estimated 65 million of its own people, and was happy to put a couple of million Uighers in concentration camps in order to reeducate them about their racial inferiority to the Chinese. They had to hold off tiananmening a few thousand Hong Kong activists only because too much of the world was watching and too much money is at stake.

But now? Now they’ve got tens of millions of people under quarantine, they’re reportedly burning thousands of bodies that died from the virus without reporting them, so many that they’re showing up on satellite photos mapping particulates. With the quarantine and even heavier than usual censorship, the communist government has ideal circumstances for score-settling and purging “subversive” elements.

Imagine how many activists and “agitators” they can make disappear in that chaos, not to mention people with low “social creditâ” scores. And the need to cremate bodies quickly means no one needs ever know that their actual cause of death was acute lead poisoning. The plague ensures it will be a while before their relatives come looking for them. Maybe they can’t get away with it in Hong Kong, but they can certainly get away with it in the “hot zone.”

The Hitchhiker’s Guide to the Galaxy has a few things to say on the subject of towels.

A towel, it says, is about the most massively useful thing an interstellar hitchhiker can have. Partly it has great practical value. You can wrap it around you for warmth as you bound across the cold moons of Jaglan Beta; you can lie on it on the brilliant marble-sanded beaches of Santraginus V, inhaling the heady sea vapors; you can sleep under it beneath the stars which shine so redly on the desert world of Kakrafoon; use it to sail a miniraft down the slow heavy River Moth; wet it for use in hand-to-hand combat; wrap it round your head to ward off noxious fumes or avoid the gaze of the Ravenous Bugblatter Beast of Traal (a mind-bogglingly stupid animal, it assumes that if you can’t see it, it can’t see you—daft as a brush, but very very ravenous); you can wave your towel in emergencies as a distress signal, and of course dry yourself off with it if it still seems to be clean enough.

More importantly, a towel has immense psychological value. For some reason, if a strag (strag: nonhitchhiker) discovers that a hitchhiker has his towel with him, he will automatically assume that he is also in possession of a toothbrush, washcloth, soap, tin of biscuits, flask, compass, map, ball of string, gnat spray, wet-weather gear, space suit etc., etc. Furthermore, the strag will then happily lend the hitchhiker any of these or a dozen other items that the hitchhiker might accidentally have “lost.” What the strag will think is that any man who can hitch the length and breadth of the Galaxy, rough it, slum it, struggle against terrible odds, win through and still know where his towel is, is clearly a man to be reckoned with.

Hence a phrase that has passed into hitchhiking slang, as in “Hey, you sass that hoopy Ford Prefect? There’s a frood who really knows where his towel is.” (Sass: know, be aware of, meet, have sex with; hoopy: really together guy; frood: really amazingly together guy.)