It Was Greek to Me 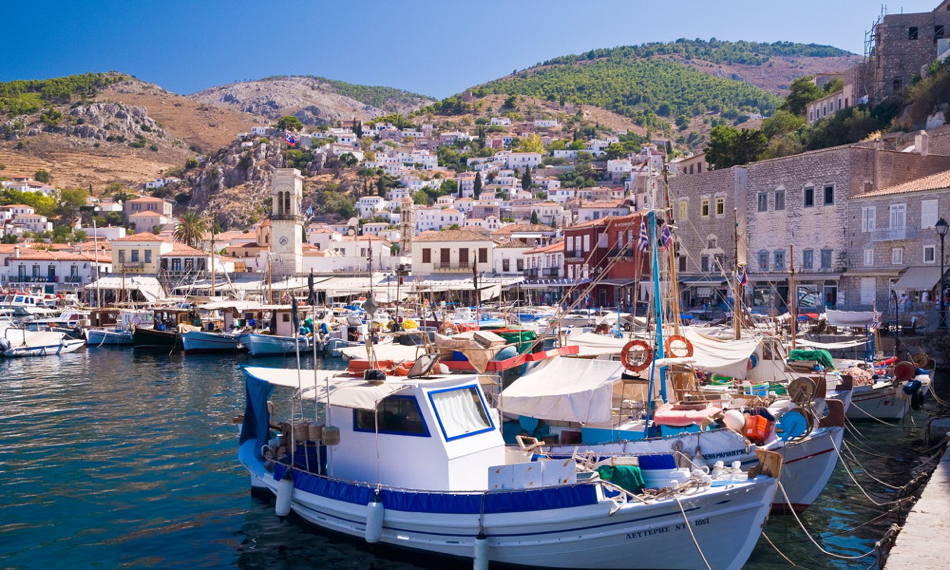 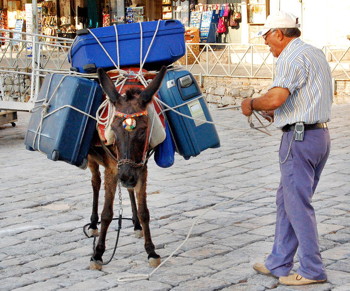 When we first came to the house we’d rented on the Greek island of Hydra we came by burro-back. It was the mid-90s and that particular island in the Saronic Gulf didn’t allow any internal combustion engines except for the one that powered the island’s sole garbage truck. On Hydra, you came to the three-story terraced house overlooking the village and the wine-dark sea of Homer’s vintage on foot or on  burro-back.

If you had any supplies that you bought from the rapacious Greek retailers in the harbor village those had to be hauled up and up and up to your house by rent-a-burro as well.

My pal and I had imported with us from the states the two legal but somewhat age-inappropriate girlfriends we both had been keeping in Brooklyn. They both got burros with sidesaddles.  To those two burros bearing pleasant, if dubious, karma, we added three burro loads of luggage, food, assorted wines and cheeses, and one large four-liter jug of something labeled “Grappa” that smelled as if it had been aviation gas in a previous incarnation. Still, it was potent Grappa, and it was cheap at thrice the price.  Then again a single sip of this toxin proved it was too potent and deadly to be consumed in straight shots. 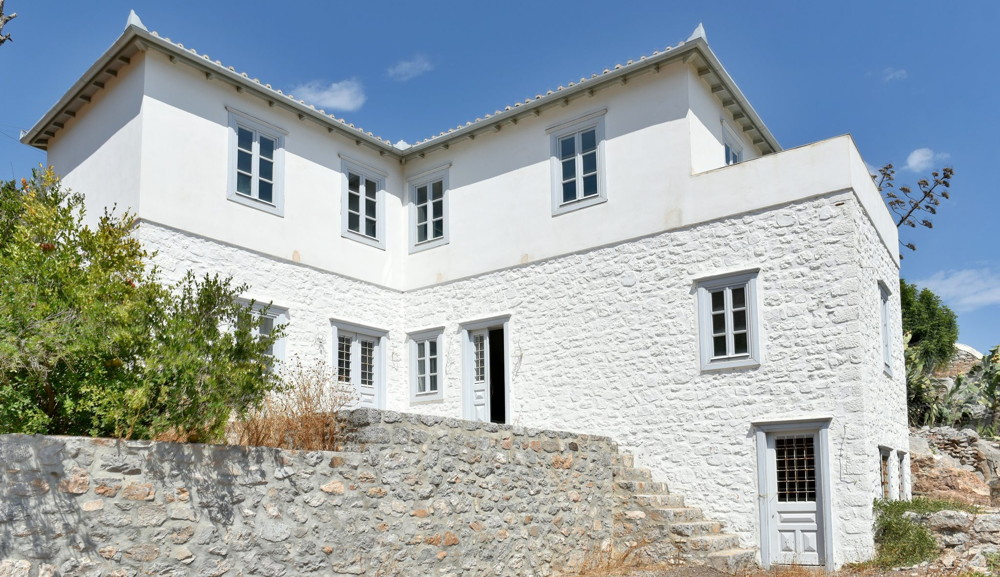 My solution was to pick a couple of kilos of plums from the tree outside our whitewashed house, dump them in a container, pour the grappa over them and wait for time to mellow both.

At some point, my age-inappropriate girlfriend went back to the New York office of Penthouse magazine and the five remaining months of our poor, doomed affair. She left me alone, deserted, bereft with only a monokini that she “forgot” to pack, and the large earthen crock that I filled with fresh ripe plums from the tree and marinated with Satan’s grappa for about two weeks. After those two weeks, the plums took on a severe authority that promised to cure my depression through stupification with only one bowl.

One evening I was consuming my third bowl of pixilated plums on the terrace above the village below when the standard, every-damn-evening screaming row between disappointed husband and fed-up wife began in an unhappy white-plastered colorful Greek home somewhere in the village below.

My guess was that the husband came home from his stinking job running that lone garbage truck up and down the hills of Hydra and needed a little bit of “wife-abusing” relaxation to unwind. She seemed to be up for it day after day and so I decided it was just some kind of foreplay between them. Still, it was constant and irritating and at some point, I went to the edge of the terrace, downed a couple of 100 proof plums, and said… at the top of my lungs in perfect English…

SHUT THE FUCK UP

BEFORE I CROWN YOU BOTH WITH A BOX OF BRICKS!

IF YOU THINK I’M KIDDING… JUST TRY ME!

BECAUSE I HAVE PLUMS AND I WOULD LOVE IT!”

Not only did the battling Bickersons of Hydra shut the fuck up, but the entire village went to whispers for a week.

I went back for fourth bowl of my high-powered plums. After that, I, somehow, staggered down the winding moonlit road to the village of Hydra ate some standard second-rate Greek food,  and, somehow, staggered back since all the late-night burros had been taken.

When I awoke with a skull full of the byproducts of the Stygian stables, I’d passed out on several sheets of paper on which some wet-brained bozon had written this…

We all love the girlys of Hydra.
Those daytrippers from Athens annoy,
For they come for some beach,
Or the juice of a peach,
And then stay for the toys of the boys.

Drink a toast to the drags queens from England,
Who’ve made Hydra an island renowned.
They’ll shop till they drop,
Or are given a pop
From the sailors in old Hydra town.

Bless the Frenchies who land here in Hydra
With only a few francs to spend.
They’ll scarf some souvlaki
And compliment Turkey
So the Greeks give them hell in the end.

The shopkeepers of Hydra are famous.
They sell crap for ten thousand dracs.
Though they’re quite disbelieving
They  got away with such stealing,
They’re not giving one red drac back.

You can eat like a king on old Hydra,
If you hanker for feta or fish,
But if you’ve a yen
For some nice coq au vin
Give it up cause you won’t get your wish.

In the houses of Hydra the Aussies
Are busy cheating the Freds
By renting the place
When no one’s in the space,
Or the absentee owner is dead.

Let’s get back to the girlys of Hydra,
The ones with the imported tans!
On its beaches of rocks
They pull up their socks
To show the tattoos on their cans.

We’ve been trapped here for weeks on old Hydra.
Our brains have been all but removed.
Still, we ride in ki-yi-kis
In butt-floss monokinis,
And claim our ideas have improved.

Those girlys of Hydra will tease you.
They’ll all drop their tops in a flash.
And for just one tipple
You can nibble a nipple,
But don’t try for more without cash.

We’ll soon say adieu to old Hydra,
And blast out of town on a boat.
From Athens we’ll fly,
But return, that’s no lie,
For out drachmas keep Hydra afloat.

What can I say? It was a very liquid time in the Greek Islands during the late 20th century. 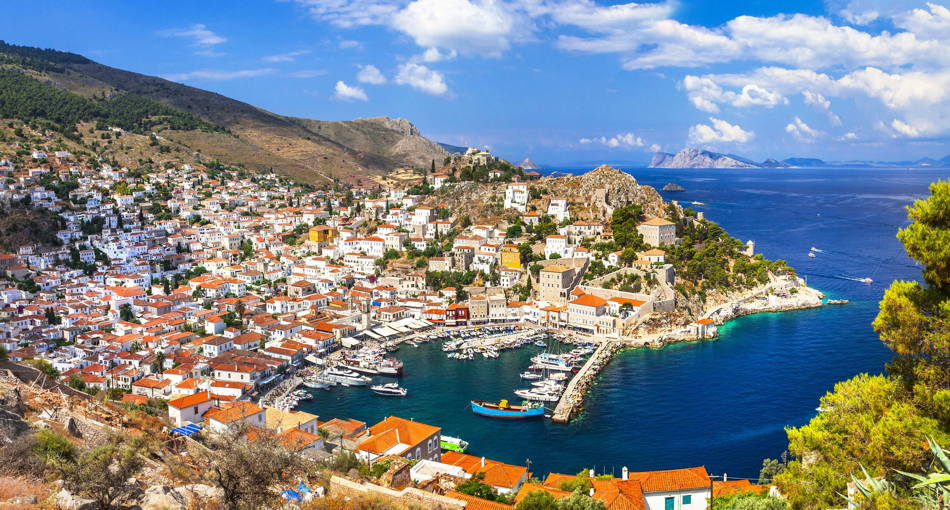 Next post: Noted In Passing: “Florida Man” to visit tailor for new pants…