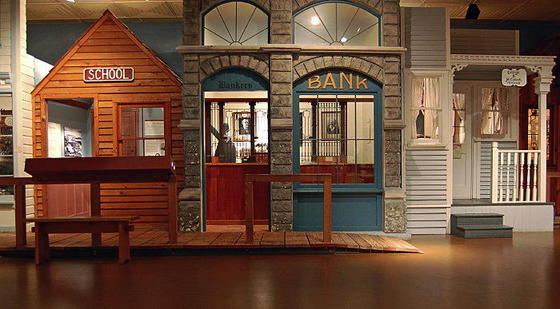 Where Lake Washington meets the ship canal at Union Bay, that’s where Seattle has tucked in its slight, but somewhat interesting, Museum of Science and Industry. I’d been putting off going there since I seldom hear of anything interesting that the museum is exhibiting. It’s a bit like the city thought it needed such a museum in order to qualify as a first-rate city. There’s a lot of that kind of stuff in this town. It usually disappoints. However, having little to do other than avoid the rain last week — and being in the general area — I pulled into the road to the parking lot.

I had to stop and wait while a bus from a local old-folks home slowly unloaded its compliment of day-tripping seniors. You’ve seen these groups. They’re the people that we usually store out of sight in one of God’s proliferating waiting rooms. You know those places too. Somewhere ahead there’s one of them with your name printed on a temporary tag and slipped into a bracket next to the door.

For several minutes the wheelchair-accessible van disgorged eight people. Seven women and one man. The women were all in wheelchairs with attendants. The man didn’t wait around and made his way into the museum using a walker. Finally unloaded, the van closed its doors and pulled ahead to park. I followed suit.

After pausing for a smoke and a coffee, I went into the museum and paid the fee. The seniors were already inside. The women in the wheelchairs were lined up like so many ducks in a shooting gallery, waiting their turns for the three attendants to roll them briskly past the carefully set up exhibits and dioramas. Glancing around I noticed that the old man in the walker had made his way unattended to the upper gallery.

I wiled away some minutes looking into the dioramas that seemed designed more towards underscoring the Museum’s sensitivity to the “diversity” of Seattle than filling in the city’s history in any detail. For every exhibit noting the contribution of whites to the founding of Seattle, the museum threw up a trivial item celebrating the contribution of Asians (came here, worked cheap, did laundry, got ahead), Native-Americans (they fought and they lost… sad) and African-Americans (one man starts a restaurant and dies rich). The thin exhibits of cheap artifacts on display merely underscore all the shabby cliches of diversity that have come to signify “we care about caring more than we care about the truth.” “Diversity uber alles,” is the phrase that pays for curators everywhere these days.

Behind me the old women were being pushed from room to room; their keepers trilling to them in the kind, cooing tones used to mollify infants. I’d forgotten about the old man.

After having enough of the Museum’s Diversityland exhibits, I made my way to the upstairs gallery I’d seen the old man enter. Unlike the rest of the museum, it was a spacious, faintly echoing room with large historic photographs on the wall.

I like the harsh content of old photographs. There’s often a truth to them that all the careful curating of our soppy era cannot obfuscate. Things are as they are, not as some wish they might have been. Lovers stare without smiles. The hands charred by hard work and harsh soil are seen sharp in every crevice and crack. The child in the coffin is dead. What you see is what they had. What you see is what we’ve lost.

I was alone in the room, except for the very old man in the walker. He was stopped along the wall on the left looking searchingly at a large photograph of a street scene. He glanced up and gave me a long look as if to say, “What the hell are you doing in my museum?” Then he seemed to think better of it and beckoned me over.

I’m not used to very old people being assertive. When I encounter it I am almost always taken off-guard. For the most part, our very old people, when exhumed from their storage facilities and placed out in public, seem embarrassed to be there in their decrepitude. It is almost as if we have told them to just go away and die very, very privately. That way we don’t have to be confronted with our own mortality made manifest in their frail infirmities.

“I wanted you to see this,” he said gesturing at the street photograph. He was bent forward in the walker, but his spotted hands were firm on the handles. He wore a plaid shirt, pleated pants, and thick-soled walking shoes. He was grizzled around the jaws, impossibly wrinkled in the face, but he still had a full head of hair. He was very old, and clearly not that stable on his pins, but his eyes were still clear and his voice steady.

“Pleased to meet you, sir,” I said, the manners my mother taught me making an appearance.

“Don’t worry about that,” he said. “They’ll be coming to get me soon and I just wanted to show somebody this picture.”

I looked at it. Then I read the label to the left of the frame: View Along Pike Street from the Corner of Second Avenue, ca 1909

It was taken from a high vantage point, perhaps a third or fourth-floor window in some building, and gave a sweeping view of Pike Street in the sharp and clean afternoon light you still get in Seattle when the sun comes out. In the way of these old photographs, it was taken with a large box camera and, accordingly, a large negative. When things hold still for these negatives they soak up an amazing amount of detail. Click and you can count the wires woven above the street that afternoon in 1909. 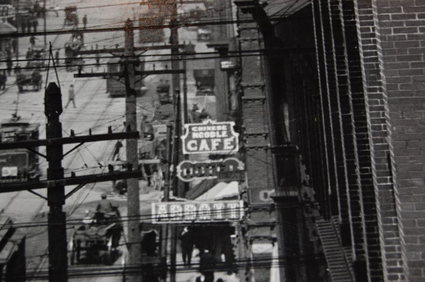 Where things don’t quite stand still, there’s a slight blur to moving objects that always imparts some hint of the fleeting moment in which the negative was exposed. Click and the man who is late dashes for the passing trolly, his left foot a blur against the cobblestones for an instant on that afternoon in 1909.

“It’s a great picture,” I said, not really knowing what else to say.

“Congratulations,” I replied. “I have to say that you seem to be doing great.”

“Yep, 100 years old, and here’s this photograph taken the year after I was born about a half a mile from where I was born.”

“You know,” he said. “Everybody you see in that picture is probably dead. Except one.”

“Down there in the corner,” he said pointing.

I looked down and saw, in the extreme lower left, an out-of-focus couple on the street, slightly blurred by the fact that they were walking when the exposure was made. Just blurs, just barely discernible as a man and a woman, as husband and wife. In front of them you could, just at the limits of visibility, see that the couple was pushing a stroller with a child in it. 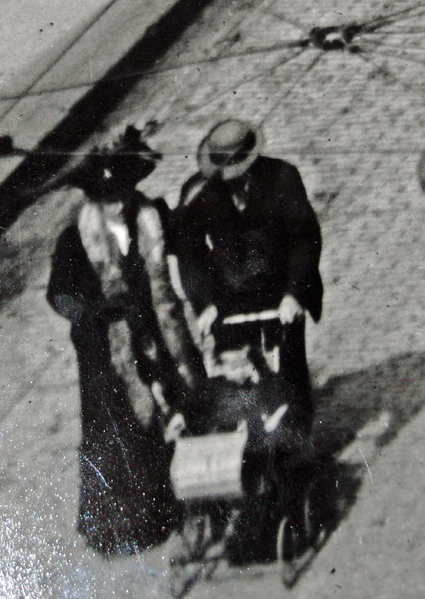 You couldn’t tell. There was no information beyond the blurs that vaguely resolved into a couple pushing a child along a street in Seattle sometime around 1909. “Don’t know,” I answered. “Can’t tell. Nobody can tell.”

“Time to get started back, Frank,” said the attendant who stood at the door. “We need to get you people in the van for dinner.”

Frank ignored him. “But it could be me and my parents. It could be us, couldn’t it?”

He shuffled a bit and worked his walker around. He pointed it towards the door where the attendant was waiting and then started off.