In the Midst of Laundry We Are in Taco

Paradise is a one-laundromat town. That’s fine since it is a very serviceable laundromat indeed. It is clean, well-maintained, and sanitary. It is right next door to the latest woodfired pizza oven of Paradise, right in front of the full-service Mexican butcher shop of Paradise, and tucked in just to the south and a little below the recently renovated Taco Bell of Paradise. As a man living alone with lots of clothing and ties older than some of my readers I elected not to get yet another washer-dryer set but to content myself with a once a fortnight afternoon at the Paradise Laundromat with a side-trip to the Taco Bell where the Taco Supreme remains one of my two fast-food fetishes.

It’s an excellent plan until today when pulling into the parking lot I looked in the window and noted a hastily scrawled sign that stated “Closed until further notice. If you have laundry inside call us at 555-1212 and we’ll try to get it to you as soon as possible.”

Humm, I pondered as I ponderingly will ponder. It looked to be a strange wasted trip and then I remembered that at least I was right next to the Taco Bell and…

But the Taco Bell, up the slight hill to my right, was also closed and dark. Curious, I parked and walked into the Mexican butcher which was doing its usual solid afternoon business. “What gives? What happened to the laundromat and Taco Bell,” I asked the butcher.

He gave me a straight look and said, “Go look at the back of this building.”

I went outside and took a look at the back of the building. It had an SUV parked inside it — or, should I say, “half-parked” inside.

Result? The impact and sudden appearance of an SUV hood at about head height after blowing out a couple of industrial dryers missed everybody but did succeed moving them, at speed, into the parking lot. At the Taco Bell deep growl came from all those on their lunch breaks in the drive-through that could see their chances for a Gordito fading far, far away.

“I was just sitting here waiting for my rugs to be finished, there was three of us up front, two guys and me,” Jackie Brooks told the Paradise Post. “All of a sudden the building shook, it actually sounded like the building blew up like you see on TV.”

Thank God we have TV, otherwise we’d have no analogies for those moments in the modern age when an SUV on a Taco run jumps the curb blasts through a wall and plunges its chromed hood deep into the guts of a bank of industrial-strength clothes dryers.

For me, this means a trek of some 21 miles to a laundromat that has no Taco Bell. It’s quite a first world problem to have. On the other hand that particular distant laundromat happens to be about ten yards from Priya Indian Cuisine and its fantastic Indian buffet, so I suppose I can suffer. 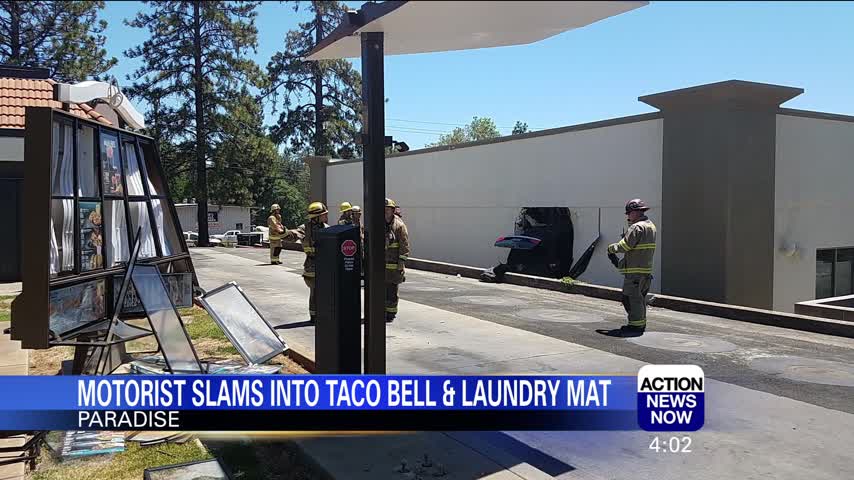 Next post: The Succulent Spiders from the Uncanny Valley