In My Mother’s Small House Are the Mansions of Memory

[Note: NOVEMBER 2018 Burned out of Paradise I have moved in with my mother in Chico. Yes, I have become that “72-year-old man who lives with his mother.” It’s not so bad. Not so bad at all to live with an active and sharp and sardonic and sweet mother as she enters her 104th year. ] 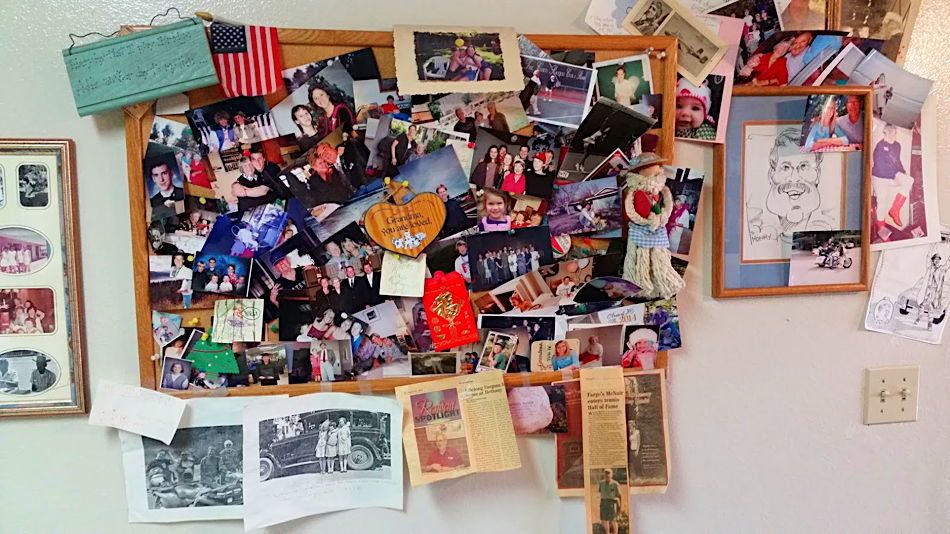 In her 104th year, this happenstance kitchen collage of my mother’s life is growing both richer and deeper. The image above is of what once was a bulletin board. It is kept in my mother’s kitchen in her apartment to the rear of an unassuming but decent collection of apartments in the small city of Chico, California.

You’d miss that. If I could show it to you in real time and at its actual size, you’d still miss it. It would remain much as you see it here — just a jumble of clips, slogans, photos, handicrafts, and images. Aside from its complexity, it wouldn’t mean all that much to you. These icons of other people’s private lives never do.

At age 104 she’s tiny but sharp. Strong in will but delicate as a bird. Quick to empathize and quicker still to laugh. Playing tennis several times a week kept her on her game — until 95.5 when her knees quit — in more ways than one. So does bridge and working as a teacher’s aide with small children. She’s wise that way but without pretense. If you ever told her she was wise, she’d shrug and ask you if you’d like another German pancake, this time with lemon juice and powdered sugar. She hasn’t missed breakfast for nearly a century, which shows you, if you had any doubt, just how wise she is.