“I think Christine Blasey Ford is a fake and a phony, and here’s why”

OregonMuse at Ace’s The Morning Rant speaks for me:

“I think Christine Blasey Ford is a fake and a phony, and here’s why: she should’ve been even more outraged than Kavanaugh at what the Democrats did to her. Ford supposedly sent a letter to the Democrat congresswoman detailing her allegations about Kavanaugh with the understanding that her name would be kept confidential. 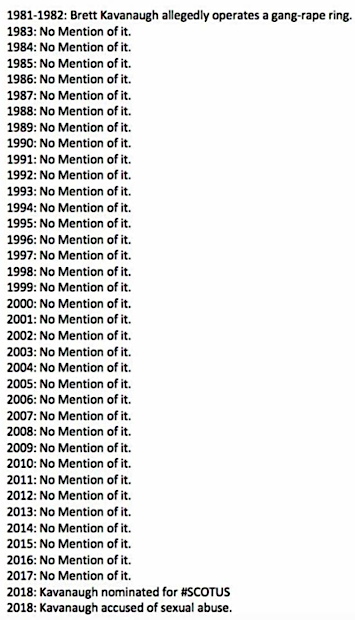 “Now we can discuss whether that’s a reasonable expectation given the nature of her accusations (hint: it isn’t), but she was either promised confidentiality or was led to expect it. But whatever the case, her name was immediately leaked to the media and the reporters came knocking on her door. So, in other words, she was lied to. Deliberately lied to, and she complained about getting death threats because of the leak. But where’s her outrage?

“It’s clearly some Democrat who leaked her name, but Ford’s reaction was strangely muted. She was like, yeah, I got death threats, but now let’s talk about the horrible things Brett Kavanaugh did to me. If that had happened to me, if I was some innocent, random apolitical citizen of the sort the Democrats are presenting Ford as, who entrusted my confidentiality to a politician who then turned around and broadcast my personal information to score political points, and turned my life into a circus, I’d be screaming bloody murder. I’d be tearing arms and legs off. Whoever did this to me, I’d be strangling with their own entrails, and no jury would ever convict me.

“That’s how a normal person would react to such a calculated betrayal. And that’s how we know that Ford is not some random citizen, but rather a well-coached, well-financed political operative.

“How she got hooked up with the scum Democrats is irrelevant at this point. ‘Oh, but her story is so credible and believable’ say all the commentators. Yeah, well, look, I got this counterfeit $100 bill here and guess what, it looks very credible and believable, too. That’s the way it was designed to look. To fool people into thinking it’s the real thing.

“Of course, we’re never going to get the real story here, because our media is packed full of partisan hack journalists who refuse to ask any questions which answers might disrupt the narrative they prefer to believe in. It’s like the Democrats have told them ‘Here is an innocent waif who was brutally manhandled by Brett Kavanaugh 36 years ago. Don’t ask any background questions about who she is, where she came from, or why her internet presence has recently been scrubbed.’ And the media replies ‘Yes boss, anything you say, boss. Shaking the tree for you here, boss.’

“It’s enough to make me want to puke.”

Next post: Their Brains Were Small and They Died