“I Had a Boyhood Once in Paradise”: The Ghost Town

[Written in 2014 on my return to Paradise after an absence of over 60 years.] 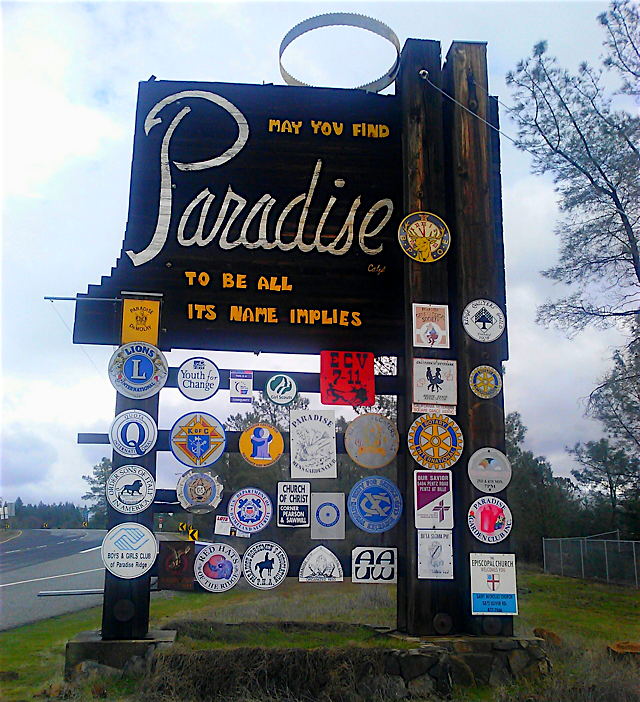 I drive the Skyway to the town named Paradise,
park his car at the canyon’s rim, and sit awhile
in the hot silence of the afternoon looking out
at the Sierra mountains where, in June, the winter lingers.

On the seat beside me a well-taped cardboard cube
contains what remains of my father. I climb out
and, taking the cube under my arm, begin to climb
down the canyon’s lava wall to the stream below.

The going is slow, but we get to the bottom by and by
and sitting on some moss, we rest awhile, the cube and I,
beside the snow-chilled stream.
– – My Father

There are two ways into Paradise, the back way and the Skyway. When you can you take the Skyway but the back way will get you there just the same. When I moved back to Paradise after being gone for more than 60 years everything had changed but nothing had changed. Superimposed over Paradise as it is was Paradise as it was. Not everywhere but in the rise and roll of the land and roads; in the place names and the clearings, in the canyons and the crests. Paradise past was there in the overlay, in that “certain slant of light” where you see what is not there layered over what is. Because it what Paradise was  in those past, gone years is still there; in moments that appear unbidden and “fade upon the blowing of the horn.”

And in those translucent moments, I often see all Paradise’s past as ghostly, drifting like a soft wall of mist across the scrim screen of Paradise present. I can always hold this phantasm at bay, filter it out to get the errands of the day done. And then in an unguarded moment, it returns.

One afternoon soon after I arrived in Paradise I saw my father standing next to the Skyway. I saw my father, alive as you or me, and dead these forty years.

By the time I saw him it didn’t really shock me. I’d lived in Paradise for over a month and I knew these things could happen here. Paradise was not just Paradise. It was a ghost town. And it was filled with my ghosts.

I first saw my father in the middle of the day next to Big O Tires on the Skyway. I’d gone there to have some minor repair done to my car and, while they took the car into the bay behind me, I wandered into the empty front showroom and gazed through the Big O display windows looking out over the Skyway and down the steep decline and quick rise of Pearson Road. Then I glanced down to the left of the showroom at a small vacant building next door. It was caked with many years of paint. The latest coats were pale gray with a light blue trim. The windows were sheets of painted plywood nailed tight to the frames and the door was shut solid with a large padlock. It was shut tight and, like many buildings on the Skyway in Paradise and beyond, had a large red and white “For Lease” sign attached to the front.

Then as I looked at it my father walked through the closed and padlocked door and, like me, stood looking down hill as the traffic paused at the light and then turned left or right at the T-junction.

It was December for me, but it must have been summer for him because he stood there in his starched, short-sleeved, crisp and immaculate white shirt with a stainless steel Parker ballpoint pen in his pocket, a sharp crease in his slacks, his perfectly shined shoes, and a ruler-level flat-top — his choice of a “sharp” haircut for men and boys. He stood there for about a minute as I watched him without moving, the smell of new tires in my nostrils. Then he turned and walked back through the walls and into his office.

Behind me a burst of compressed air from a lug wrench brought me out of my brown study and I was looking again at a ramshackle gray and blue building with a small courtyard that was now “For Lease.” It was then I recognized the old building as the place where my father had had his car dealership when we all lived in Paradise in the mid-1950s.

I told myself that what I had just experienced was some sort of vivid memory from my childhood as a kind of faint film from my mind projected onto the mundane present. Yes, that was all it was. I’m sure of that. I’m an educated man of no little experience in the real, wide world of now. It only felt like seeing a ghost. In broad daylight in deep December, dressed for summer in his crisp white shirt.

The last time I’d seen my father before this was in a dream decades after he died on the operating table. He came to me out of the streets in the Red City that persists off and on over the years in my dreams. He was wearing a hospital smock stained with large patches of his blood. He said to me, “I don’t belong with the dead,” and then he faded. I hadn’t seen him since.

This time, on the Skyway of Paradise, he was looking much better; looking at home with the dead. This time he didn’t even seem dead, only translucent. I had a brief moment of disappointment that he was gone before we could continue the conversation from where he left off in my dream, but having been briefly dead I knew that the dead have little to say to the living. In any case, he was my father and I was, this time, glad to see him.

The poet says “Old men should be explorers.” When I was younger I admired that sentiment but now, as the hand of age closes around me, I find I don’t wish to explore new lands, but to explore again those I have already passed through trying to see what I missed in the first hectic rush towards my “goals.”

These days I pass my father’s place on the Skyway several times a week while turning onto the Skyway on an errand in Paradise or down from the ridge and into the valley to see my mother or to get the kind of meal unavailable in Paradise.

My father’s vacant office is right at the turn and, because of that (or so I tell myself), I don’t stop. Someday I might pull over down the road a bit and walk back to his office hoping to see him again. But I don’t think he’ll oblige if I do. He doesn’t have to. He’s not inside our time now. He’s just one of many ghosts that I’ve seen of late, up here on the ridge, up here in Paradise.

If this essay pleased or informed you DONATE HERE to help me recover after being burned out in the Paradise fire with my thanks.

Previous post: At last we know the answer to “Who’s a Good Boy?”