Regarding the Gonzos: Hunter Thompson. What a man. Yeah, right.

[Note: An astute reader notices an off-hand remark of mine concerning hanging out with Hunter Thompson back in the dawn of time and asks for more detail. Wish granted] 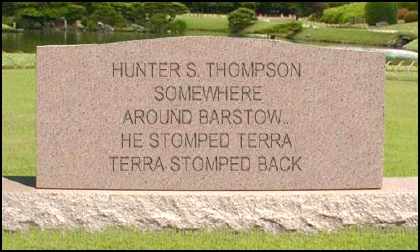 I USED TO RUN A MAGAZINE  (Organ) IN SAN FRANCISCO BACK IN THE 70s. I ran it out of the basement of an early 20th century firehouse in North Beach under the offices of Scanlan’s magazine. Scanlan’s was the scam magazine of Warren Hinckle, a man whose record of conning money out of Bay Area millionaires stood unbroken for decades until the arrival of David Talbot and Salon and silly philanthropists that mistakenly married fanatic feminists.

Warren liked to drink and spend other people’s money on himself and writers. Naturally, such a honey pot was going to attract Hunter Thompson. Thompson liked to drink, snort coke, and spend other people’s money on articles he might or might not write. A favorite item from the day was the time Hunter rented a car on Scanlan’s credit card. He then parked it next to one of his North Beach Beatnik bimbo’s apartments and went to and fro with it for a number of months. When the time came to return the car it was discovered that the rental fee would be much much more than Hinkle and Scanlan’s wanted to spend. Their solution? After a night of beer, bourbon, and bongs, they drove the car out to the end of a pier in San Francisco, stepped out, and let it drive itself into the bay. Then they reported it stolen.

Beer. Bourbon. Bongs. Bay.  What can I say? Good times.

Sometimes the small staff working with me at Organ and the larger staff working the con with Warren at Scanlan’s would decide to drink together. We liked to drink at our bar of choice up at the end of the alley, Andre’s.

One night, when Hunter was in town, we all went up to Andre’s for a non-stop night of drinking.

Andre was an elegant French-Canadian who ran an elegant bar and restaurant. He was old-school and could mix any drink anyone could name and it was always perfect. He was polished, polite, and a good listener. But he was a pro and usually knew when you’d had enough. Then he politely asked you to leave. If you ignored him, he had a very large mallet with a three-foot handle behind the bar and you didn’t ignore that.

So there we were, eight or ten of us I think, hanging around and drinking with “Hunter S. Thompson, man!” And, as they would, Warren and Hunter got into a drinking contest — sort of like watching a match between Ali and Frazier in their prime.

It went on and on long past the point where I could or would keep up. It was getting late and Andre announced to the assembled cross-eyed drunks, that he was giving us our last round. The regulars took him at his word, but Hunter had to push the envelope. Except with Andre, there was no envelope. Just a polite, “Non.”

The next thing I know there’s a gun in Hunter’s hand and three rounds blasted into the ceiling of the bar. (Did I mention that there were apartments where people were sleeping above the bar?)

Then I think there was a blur of Andre, in suit and tie, coming over the bar with the mallet. Then more blurs and everybody is out on the street dragging a semi-conscious Hunter back down the alley mumbling something about getting his gun back. After that I don’t remember much and, frankly, haven’t thought all that much about Thompson in the nearly 50 years that have intervened.

Later Hunter left this Earth in the same way that he lived — gun-crazy, thoughtless, self-obsessed, and selfish to the last second. A gunshot suicide at home, leaving his wife and son to discover and deal with his ruined corpse and clean up the room.