GRINGO DE MAYO!: A Counter-Celebration for May 7 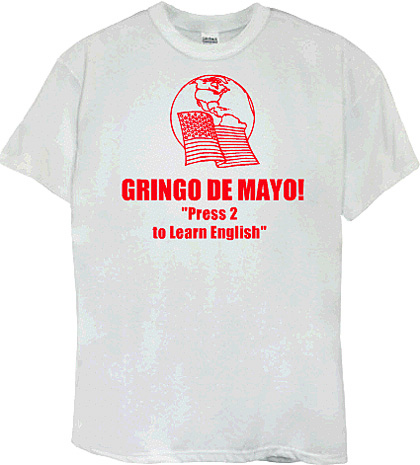 A holiday for the rest of us….

Is it too late to suggest that we few, we happy few, we band of Gringos (Gringo regardless of race, color, creed, gender or national origin, of course.) counter-celebrate next Monday as “Don’t Pay Your Illegal Day” and follow it up on Tuesday with “Fire Your Illegal Day,” followed on Wednesday with “Burritos Are Really A Revolting Food Day?”

Who says there’s no good news coming out of this nationwide celebration of misdemeanors and felonies in the millions? This LA Times item Monday Protests Could Hit Local Economy Hard – Los Angeles Times gives hope: “Fernando Lopez plans to close his three local Los Angeles-area Oaxacan restaurants for the day Monday after his approximately 50 employees agreed to observe a planned immigrant rights boycott then.”

By my count that’s three less places that will be serving up the ” hand-wrapped garbage disposal delight” known as the “Burrito” (so named because it contains scraps of otherwise inedible food that was, in the past, fed only to Burros.) Touted by the poor and the brain-dead alike as a “tasty snack,” the Burrito violates the primary rule of dining, “Never eat anything bigger than your head,” while recycling stuff usually found in the dumpsters of good restaurants through the innards of a human host who should know better and — shortly — will.

This last item is probably why the Burrito (AKA “Tomorrow’s Turd Today”) remains popular with liberal medheads hooked on keeping human ethnic pets on their progressive political plantations. After all, if you can only afford to eat or to feed people once a day, the Burrito is your huckleberry. And if you can also reduce food scraps that would otherwise go straight to the landfill into human waste, you also have a food object that “walks lightly on the planet.”

So it seems to me that the fall-off in Burrito production across the nation coupled with immense savings to be had in not handing out below-minimum wages to millions of dazed illegals is a two-fer-one win all around.

If that can be followed on Tuesday by a “Fire Your Illegal Autofornication Festival” across the nation it seems to me we might be on the way to remembering the great truth that has been forgotten over the past few decades: “Actions have consequences.” As many in the “professions” know, “Downsizing Happens.”

Will mass sackings bring the country to its knees? I don’t know but it strikes me that the sudden lack of Mexican restaurants will be a boon to Asian restaurants since you seldom see the people who run and work in Asian restaurants slacking off when there’s money to be made. In addition, it seems to me that allowing all our grass to grow a bit longer should go a long way to upping the content of oxygen in the atmosphere. You want your grass cut? Stop guilt-tripped parents from handing out $100 a week to their teenager. He’ll be knocking on your door with a mower and a pair of shears the moment Doom IX is released.

The only real “problem” with illegal immigration in this country is that America has so far has lacked the will to apply the solutions.

“Can’t ” build a wall? Here’s Billion the First. Buy brick the first. Stack and repeat until you get to brick the last. You don’t think we can stack bricks in this country? Take a walk in midtown Manhattan and start counting. This argument is rooted in the post-9/11 argument, “You know you can’t kill ALL the terrorists.” Really? I guarantee you that we can make more bullets than there are terrorists. In the same wise, we can make more bricks than there is border.

“Can’t” deport all the illegals? Really? Okay, let’s start by deporting every single one that’s currently resident in jails and prisons. After all, you can’t say we don’t know who they are and where they are. That would be a good start and we can move on from there since it would give us practice in how to load buses and drive, oh, South. This “can’t” is a variation on the argument, “But you can’t kill all the lawyers.” True enough, but a couple of hundred killed at random every year or so would tend to make the survivors more thoughtful.

“Can’t” get Americans to do the jobs the illegals do? Not if there are a lot of illegals scampering about doing a $20-an-hour job for $5.99 an hour. Take the wage down to a dollar a day in the manner of real third world countries and you’ll have jobs that illegals won’t do.

So, let’s start by a day, May 7 this year, of not paying illegals and go on from there. In a way, Monday will be a gift. Despite the predictable raft of stories about lawns not mowed and burritos not wrapped, my bet is that we’ll all wake up on Tuesday to find things did not, after all the dire predictions, fall apart when millions failed to show up for work. With any luck, the only things that will have fallen apart on Tuesday will be millions of jobs held by illegals. This, of course, will have the downside in southern California as thousands of roadside shape-ups swell until they choke the freeways, but traffic is a small price to pay for freedom under law.

Monday and Tuesday’s glorying in the things that make America great (No pay for no work. Actions have consequences. ) would be made even sweeter on Wednesday’s “Burritos Are Really A Revolting Food Day.” The win here is, at the least, a blow stuck against the “Globally Warming Obesity Epidemic.” Fewer burritos means fewer of our fellow American co-inhabitants teetering down the sidewalks threatening to topple over into otherwise innocent by-walkers, crushing them into damp red spots and gobbets of insta-carne asada on our sidewalks (which very well might end up in the evening’s Burritos, thus completing the cycle).

Of course, fewer burritos means that the companies that make those endlessly proliferating obesity scooters might take a hit in sales, but never a rose without a thorn, right?

Previous post: The Frozen Faces and the Tar-Pit Places of America’s Most Depraved