GAY TIGER-KILLER LOSES HIS ZOO: The (Non-Riot) Story of the Day 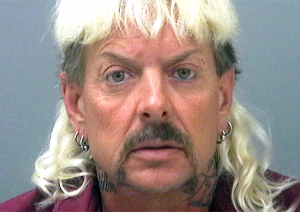 As the World’s Only Superpower burns to the ground over the provably mistaken belief that white cops are the biggest danger to black males, we pause to cover a completely wacky and unrelated story before diving into the endlessly depressing live-action unspooling of the United States of America. This story, and this story alone this week, will have nothing to do with the ongoing riots.

The methed-out-looking guy with the frosted mullet and 70s-porn-star mustache you see in the picture there was born Joseph Allen Schriebvogel on a humble Kansas farm in 1963. Five years later, he was raped by an older boy, which may or may not have set him on a path toward lifelong homosexuality; all we’re saying is that it is a little weird that so many adult homos claim to have been molested or raped by older members of the same sex while they were children—last we checked, rates of self-reported same-sex molestation among adult gays were twenty times higher than those reported by people who turned out to be perfectly healthy and normal grownups. What’s even more interesting than this statistical disparity is that you’re not even allowed to mention it, or mobs of gays—who are so joyless at this point, they really should be referred to as “angries” rather than “gays”—will burn down your house with rainbow-colored flamethrowers.

Due to the fact that he married another dude, Schriebvogel’s legal name is now Joseph Allen Maldonado-Passage, but most people know him as Joe Exotic, and boy, is he a character! His first known gay partner died of AIDS in 2001. Another gay partner of his held a gun to his head claimed that Joe also threatened to kill him, and ultimately wound up going to prison for murder and child molestation. Another gay partner of Joe’s was murdered by someone else on Joe’s property. Joe is a one-time police chief of Eastvale, TX who claims he attempted suicide by crashing his police car into a bridge after his parents outed him as a peter-puffer. He is an aspiring country-and-western artist who allegedly pays other people to record music and then, without telling them, stars in the videos as if he was actually the singer.

Since the late 1990s, Joe has managed the Greater Wynnewood Exotic Animal Park in Oklahoma, which has gained global notoriety for its collection of giant cats.

And, since the exotic-animal-park industry appears to be highly competitive, Joe has been involved in a life-or-death struggle with Carole Baskin, who owns a Florida animal sanctuary called Big Cat Rescue, for nigh on a decade. In 2011, Baskin first locked horns with Exotic when she protested his use of tiger cubs in public presentations. In retaliation, Joe lifted her “Big Cat Rescue” brand name and slapped it all over several of his products, leading her to successfully sue him.

In the late 1990s, Baskin’s husband had gone missing; he was formally declared dead in 2002. People magazine ran a story about speculation that Baskin had murdered her husband. It’s a scab that Joe Exotic has been picking since their feud erupted—he even recorded a country video called “Here Kitty Kitty” that depicts a super-plump Baskin feeding her dead husband’s flesh to a caged lion as Joe looks on disapprovingly in a cowboy hat and priest’s collar. That boy is fierce!

Problem is, in 2018 he was popped on federal felony charges for killing five tigers and for attempting to hire hitmen to kill Carole Baskin. Joe Exotic is currently serving a 22-year sentence. His ongoing feud with Baskin was chronicled in the Netflix series Tiger King: Murder, Mayhem, and Madness.

Last week a federal judge appeared to hammer the final nail in this highly entertaining feud’s coffin, awarding Joe’s zoo to Baskin. Now Ms. Baskin has two big-cat sanctuaries and he’s in a cage. The only way that Joe could possibly win now is to escape from prison and personally murder Baskin—not that we’re encouraging such actions, because they would clearly be illegal. But knowing the level of Joe Exotic’s vindictiveness, we wouldn’t put it past him. Sitting there in his cell, he has nothing to do but plot his revenge.

Next post: When Police Go On Strike (or are disbanded)

Previous post: COBB: The Politics of Rage Are Always the Same