F’Real: The Return of the Milkshake

Take your eyes off of any sector in this innovation-driven tech culture and in three years everything has changed. And now you can taste the change. F’Real.

F’Real, that is, as in milkshakes.

This surprising by-the-side-of-the-road innovation took me by surprise last year in a gas-station/convenience-store just outside of Grass Valley, California. I was looking at an hour and a half behind the wheel before getting home and feeling a bit peckish and thirsty at the same time. After filling my tank of the lower-priced fossil fuel blend I went into the store to check into, well, Dorito Futures for my drive.

Once you’ve taken the Doritos you know you will have to take something else in order to, as we so delicately say, “Wash it down.” As I made my way towards the 500 linear feet of beverage choices my eye was caught by a new machine making a bold claim: “The Best Milkshake On Earth.”

Now for those of you who have memories of what were once called “soda fountains” the milkshake is one of the leading reasons for your childhood worship of these once ubiquitous institutions. Beyond even the holy milkshake lay one thing that was even better– The Malted Milkshake Milkshake. As a boy I was addicted to milkshakes and even went so far as to spring the extra nickel to get the Ultimo Optimo Malted Milkshake.

But those days were, I assumed, long gone and one was forced to either make one’s own Malted Milkshake at home (Ice cream, milk, chocolate syrup, Borden’s Malt, blend until the right consistency), or settle for the cup of aerated milk powder known as the “McDonald’s Milkshake.” I cursed an America that could have forgotten the real milkshake. Without the real milkshake being dispersed across the length and breadth of America I asked myself, “SELF, how can we possibly hope to MAKE AMERICA GREAT AGAIN?” I despaired.

Then F’real machine opened my mind and shut my mouth.

It has all the best things about the brave new age in which we are being dragged; personal choice and tasty treats with a screen for entertainment and updating while you wait for the robot to do your bidding.

I was dubious at first. (It’s a robot. How good could it be?) But then I chose the basic “Chocolate Milkshake,” took out the cup from the freezer section, dropped it into the blending cup and waited while the whir and the whirl did their magic.

What happened then? This milkshake aficionado speaks for me.

“Yo, check it out. It just went inside the Millenium Falcon.”

Since that afternoon in the convenience store, I’ve become especially alert for these machines on any route I might take. (There seem to be about 18,000 of them making America great again.)So far they seem to be only found in stores, but I am hoping that soon they will be available for homes.

Then again, maybe not. Considering that every flavor F’real milkshake seems to be on my diet it might be best if I had to commute to it.

UPDATE: It’s too late. Since I last checked three months back the closest F’real was at least 40 miles away. Now they’ve invaded Paradise itself. Still, I have to be strong. I have to show I have real willpower.

UPDATE 2: I am deeply ashamed to confess that after discovering one of the F’Real machines within two miles of my house I resisted its Siren call for less than 30 minutes. 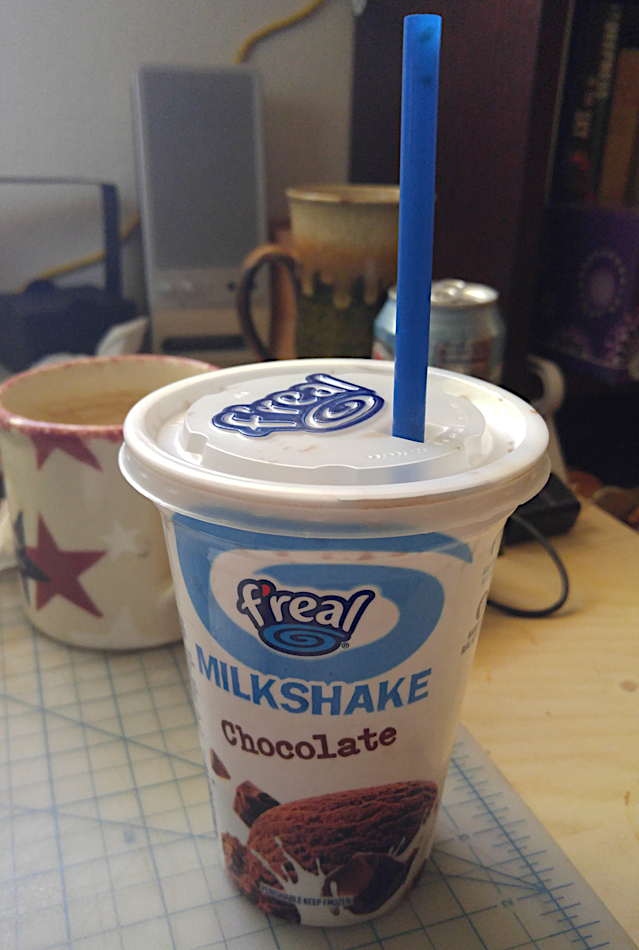