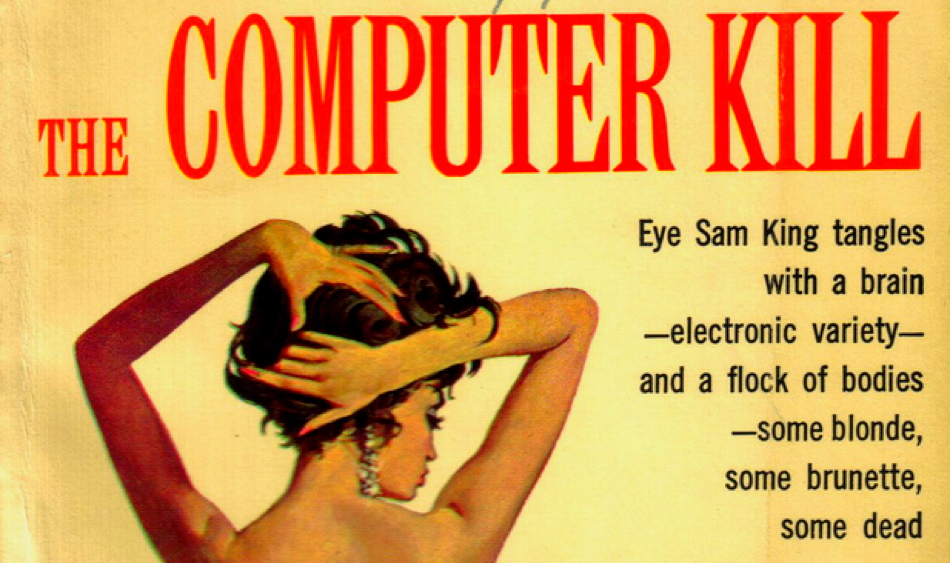 Last night I had one of the most frightening dreams a man can have. I dreamt that someone, someone who hated me deeply, had given me a brand! new! computer! for Christmas. I woke up screaming, but the dream persisted.

A new computer! I could just see it. It had everything: a processor so fast that it was measured in googlehertz rather than megahertz, more ram than the entire sheep population of New Zealand, a hard drive bigger than the Great Plains, and a megaplex sized-monitor capable of displaying 2.5 trillion ordinary colors at warp six and with such a blistering intensity that your eyes boiled in your skull. A broadband connection so huge it could suck the Library of Congress dry in a nanosecond. The CPU was covered in sable. The keyboard fashioned from rare woods. The wireless mouse was surgically implanted in my finger tip so all I had to do was gesture mystically.

This Christmas puppy came loaded with Fritterware. It had Openfly OS, BrokenWindows Version 6.66, HomelessOffice 2020, Chrome Crunch, TurboSax, iEverthingEverywhere and Schlong. Ye Olde Paperclip was back as the host of my new computer’s “interactive” training program aptly named RageMaker. When I opened the box in my nightmare my first impulse was to rip open all my other presents in hopes that someone had given me a gun so I could just shoot myself.

Nothing is worse than a fully loaded new computer, and I’ve been using them for nearly 40 years. Setting up a new computer is like getting ready to French Kiss an elephant; you know it will be a new experience, but you know it won’t taste like Veal Cordon Bleu.

I presently own and operate three computers (One hopefully named “Power Macintosh.”) I hate all of them in a separate but equal ways. I am not alone.

Given the death-dwarf invasion of Windows 10 and the eternal retail desperation of Welcome to Best Buy Can I Help You Find Something?, I know that all over the world this holiday season, millions upon millions of people will be receiving new computers, and that those computers will truly be the “gifts that keep on giving.”

Those gifts will be:

As people across the globe attempt to install backup drives, get routers to WiFiCast through six feet of solid lead,  cheat at Solitaire, and sign-up for an Internet connection so fast is puts Light in a walker, suicide hotlines will begin jam as human beings come face to face, not for the first time, with the only machine in history that makes its customers into human lab animals. And makes them pay thousands of dollars for the pain.

How did we get here?

Why have we become a world of sheep begging the Bill Gates’ of the Silicon City to not only impoverish us, use us, keep us on hold to their aptly name “Help Lines” for hours at a time, and then clip us again with “upgrades” to programs that are less than six months old?

When did we become like junkies who don’t even get the first one free, but have to go back time and again to get the latest, greatest, fastest version of something we didn’t really need in the first place?

The truth is that, over the last 30-40 years that personal computers have been a part of our lives, we have been trained to expect computers to fail. We’ve accepted that they will screw around with our lives and our fortunes. We have slowly and without any organized protest, been suckered into being the Beta Testers for new software and hardware that not only screws up in predictable ways, but is known by the manufacturers to screw up in predictable ways (“The inability for the program to connect with the Internet? Oh yes, that’s a known bug. Well have a patch soon. Just go to our web site and download it.”)

If General Motors were to release an automobile whose steering wheel froze without warning, whose engine took three minutes to load and start itself and then came to a halt when turning left and going downhill five percent of the time, whose windshield suddenly went from clear to black, whose trunk made ten percent of the things put inside disappear forever, whose radio went on and off without warning, whose passenger compartment came with a dog that ate homework daily, and whose Owner’s Guide was the size of a phone book printed in Farsi, would the consumers of the world line up in droves screeching Feed Me!?

It can only be that besides being junkies and sheep, computer users are also masochists willing to pay for being abused, degraded, humiliated and made to feel as if we hand the intellectual capacity of a Planeria.

Well, this worm is turning. I, for one, am kicking the habit, leaving the barnyard, and getting the whiphand. After almost 20 years of getting bigger, “better,” more powerful computers, I am now going to search for a smaller, slower, more dependable model. I want to find the way-new old computer.

Here are the specs for the computer I really want for Christmas:

1) I want it to go on and off with the touch of a button like a light or a television.
2) I want the mouse to go where I steer it.
3) I want the monitor to be big and bright and never fail.
4) I want ALL the drivers in place so I can drive it.
5) I want it to save everything I do in the background all the time so I never lose anything.
6) I want it to keep track of everything and never lose anything.
7) I want to never again see an error message that reads “Memory Fault at 000E461”( Nobody knows what that means, not even Bill Gates, but the preferred translation is “Neener, neener, neener!”).
8) I never want to wait to wait while we download new art again.
9) I don’t want to see there’s a 40 megabyte $99.00 upgrade for this software. Download? I want the software to be finished when I buy it the first time.
10) I don’t want it to eat my homework, I want it to do my homework.
11) I want it bug free, freeze free, and fritter free the first time.
12) I want it to cost about what a decent rack of babyback ribs costs and be just as delicious.
13) I want it to listen to and understand my voice so I can never again feel I have to run Typing Tutor just to answer my email.
14) I want it to incinerate the junk email that fills up my hard-drive quicker than you can say “Make Money Fast.” and send a letterbomb to spammer.
15) I want all the technoblather that this machines fills the world with to just stop right now! I never, ever, again want to wake up in the middle of the night staring at the ceiling thinking, “JAVA? What is it and why do I have to care about it?”

Personal computers for human beings have been around for over twenty years and it is long past time for the industry’s ‘experimental’ phase to end. Its time for everyone who is tempted to buy a new computer to just say, “We’re mad as hell about being roadkill on the Information Highway and we’re not going to buy in any longer! Use some of your billions to make these machines fit for human consumption before you dump them on the market, or we’re going to force our governments to issue global recalls on these tainted, virus ridden rotten machines! If they can do it to beef, they can do it to silicon.”

You may say I’m a dreamer, but I’m not the only one.