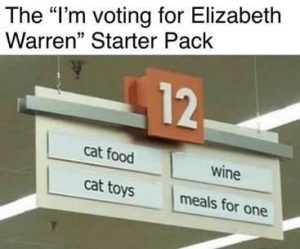 Legal Insurrection writes the Warren Campaign Obituary: She tried to fake it, but America didn’t buy it Americans will nominate and elect all sorts of candidates, from the virtuous to the rogue. But Americans don’t like fakes. And there may never have been a more fake major candidate in modern American history than Elizabeth Warren.
…

Warren was not Native American, and never identified as Native American until she was in her 30s and climbing the law professor ladder to Harvard. Yet Warren used her supposed Native American identity to juice her resume and to land on a short list of “Minority Law Teachers” in a law professor directory used in the 1980s for hiring purposes. Warren also began to identify herself to employers as Native American. Miraculously, she rose from U. Texas to U. Penn to Harvard, despite lacking the legal pedigree (fair or not) usually required for that rise. It was a total ethnic deception.

The family lore also was highly questionable. Warren claimed that her parents had to elope because her father’s white family would not accept her Native American mother. But by the time Warren told the story publicly in her campaigns, all the people who had first-hand knowledge were dead. Contemporaneous documentation regarding her parents’ wedding called the elopement story into serious doubt.

Yet Warren defended that deception from the time it was exposed in late April 2012 until the fall of 2018, when a disastrous DNA test rollout nearly cratered her nascent presidential campaign. Only then, having spent almost 7 years defending her claim to be Native American, did Warren issue a half-hearted, non-apology apology. As fake as her claim to be Native American was, the apology was worse.

Donald Trump branded Warren “Pocahontas,” and social media called her “Fauxcahontas” and other variations. Whether you approve of those terms or not, Warren was branded as a fake, and it stuck. She couldn’t shake it no matter how hard she tried because there was a core truth to it.

Then it was a drip, drip, drip of fakery exposed.

Warren was a faker. America doesn’t want a faker. New Hampshire killed her campaign. The Elizabeth Warren campaign epitah will be: “She tried to fake it, but American didn’t buy it.”

Warren’s campaign obituary has been written. It’s only a matter of time before her campaign capitulates to reality.

Next post: And the clear and historic winner in New Hampshire primary is… Donald J. Trump