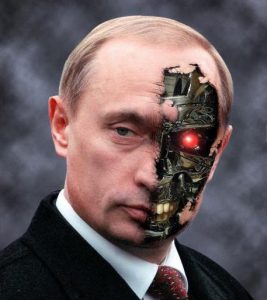 In fact, it may well be possible that the only thing between you, me, and nuclear war is. . . the notorious “Deep State,” which still holds some ancient 20th-century “realist” silverbacks who on Tuesdays know a hawk from a handsaw. If US foreign policy was set by Twitter poll, as one day it surely will be, the ICBMs would probably already be flying. Wilsonian liberalism is a weapon of media war far older than anyone alive, but it was then guided by canny, pragmatic statesmen—not demented Internet egregores.

So, I’m sorry to say this, kids, but it might not be too early to stock up on canned food. Of course, I said the same thing about covid. But of course, I was right. (Kind of.)

Let’s start by assuming that Putin, this mad brute—whom some are already calling “Putler”—is entirely responsible for all the bloodshed and violence of this war. This is surely the position of our Vice-President and her many Twitter fans. Putler is guilty! We must hang this Putler, and the evil imperial henchmen of his evil Putler empire.

Now, let’s suppose someone replaces Putin with a robot. This machine looks exactly like Putin and behaves exactly like Putin, and has exactly Putin’s job. However, being a machine and not a person, it cannot be guilty of anything. Possibly the person who installed it is bad—but we have no idea who that is. In any case, this Putinbot, this evil AI, is the absolute ruler of Russia and makes all its political decisions.

Under this identical but oddly different scenario, what is the morally proper way for the American people, in our collective democratic capacity as the State Department of our democratically elected, or at least democratically validated, government “USG,” to conduct our foreign policy toward Russia?

See, we are not allowed to ask what the Putinbot should do; it cannot be swayed; it is a robot, a machine, a force of nature. Its acts are acts of God, against which we can only guard ourselves as best we can. As Genghis Khan used to say when he besieged a city: “If you had not committed great sins, God would not have sent a punishment like me.” The aggressor is a non-player character; you cannot play him, you cannot blame him. Playing only one player is a basic principle of the statesmanship game.

The purpose of this thought-experiment is to force your mind into the actual position of a statesman, not a six-year-old playing kickball.

For instance, suppose we needed amber to power our fusion reactors, and amber was only found on the Dnieper. Then, NATO control of Ukraine’s rich amber mines would be of course imperative. But this is not the case. Can we find another realist motive?

One reasonable-sounding suggestion is that once the Monster of Moscow takes Kiev, this conquest will only whet his foul appetite. He must eventually want Kuwait, like Saddam; and still later, Kansas. Better to fight on the Dnieper than the Mississippi! The free world is not safe from these vile monsters until, everywhere on the planet, freedom’s peaceful, defensive armies have slain autocracy’s violent, aggressive armies. After all, Hitler.

Ergo, we must support the Ukrainian regime, not at all because we care about the Ukrainians, but to use them as cannon-meat in our own self-defense. Now this is the realism we need!

Putting the Ukrainian colors in your Twitter handle, or whatever else you do (usually symbolic, but I think they have a Bitcoin address) to “support” the noble rebels of “Kyiv,” gives you a rush of power. You feel that you have done something good with your time on earth. You have made an impact. You are, in fact, changing the world.

In all theories of classical political science, power is held by the state. The state is defined by its monopoly of power. Politics is the contest to control the state; justice is the legal force of the state. The situation in which not all power flows through a single legitimate state is known, and deprecated. It is the condition of anarchy, even of war.

In democratic and still more in Marxist theories of political science, it is taken for granted that politics cannot be contained with the state. Power is a field that extends across everyone; everyone has power; everyone can act politically. The term “social justice” is apt; social justice is to legal justice, as social media to broadcast media. The cell membrane of the state is pierced; the cytoplasm of power flows out everywhere.

Everyone’s duty is to act with force, to use power directly and personally rather than delegating it through indirect political mechanisms. Everyone is their own judge, jury, and executioner. Everyone is on the jury that convicts Putler of war crimes; everyone is standing on the scaffold as he takes the drop. Even lynching is social justice—just not the kind most people like. You are doing your best to lynch Putler, right now. No one is making you participate; you are doing it of your own free will; you can just stop.

The key to ceasing this awful, destructive behavior is understanding that it is not about them. It is about you. In fact, you do not know them at all. You know no more than a few kindergarten facts about these faraway people whom you love so much that you consider it your moral responsibility to goad them, at no cost or risk to yourself, into the terrordome of war, for their heroism to excite them. If you loved them more, you would think harder about whether or not you were doing them a favor.

Your “support” for the Kiev regime is about one thing: love. It is about your love for yourself. Its pathological nature reveals a deeper truth: an unfilled need for love and purpose, for a public and collective life which is not a pornographic charnel-house. It is sad, not just in what it does to the Ukraine, but in what it does to you, me, we, us. So, like… please consider the possibility of changing the way you look at this.

Next post: ‘DON’T BELIEVE EVERYTHING ANYTHING YOU READ IN THE PAPER’