Everybody Knows: My Prophetic Secret Minutes of The Gay Mafia from 2002

[ Once upon a time, when American Digest was very, very young, I had occasion to notice that there were a few (minor and soon papered over) cracks in the Gay Power Wall of Hollywood and New York. Those who say they “just didn’t know what was going on in the realm of illegal and immoral sexual shenanigans” in Hollywood or New York are…. How can  put this politely? ….. are lying out of both sides of their pedophiliac / hebephiliac asses.

As WE ALL know, THEY ALL knew. Hollywood and New York have been the world capitols of boy buffets for a very very long time. Here’s a bit of what I wrote over a decade and a half ago. Time has not improved upon it.] 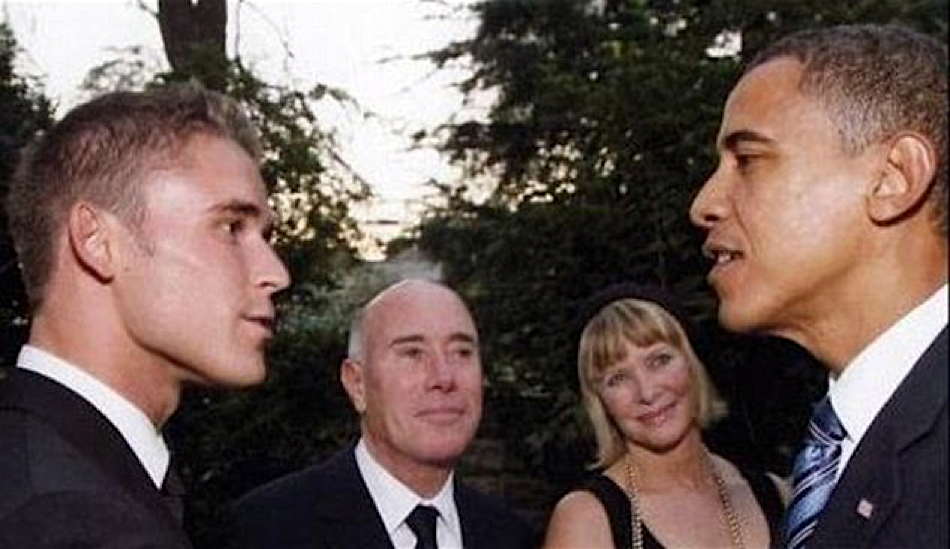 David Geffen and Boytoy with Friend

One-time and now has been crack agent Mike Ovitz has been getting press and heat from a comment he made to Vanity Fair about being a victim of the ‘Gay Mafia’ of Hollywood.

The names he named included some of the most powerful men in Tinseltown and included the openly gay David Geffen as well as Eisner of Disney, Bernie Weintraub, Ron Meyer, Kevin Huvane, agent Bryan Lourd and others.

Reaction against Ovitz was swift and terrible with threats of never eating even a Swieback in Hollywood again, as well as having valet parking privileges suspended for life. Ovitz caved within 24 hours and issued a formal apology to the press. On the eve of the Fourth, a grateful nation was thankful that not only was there liberty and justice for all in the land, but that there was indeed no ‘Gay Mafia’ running America’s most influential export to the world.

Until, of course, American Digest uncovered a transcript of Ovitz’s “apology meeting” with the movers and shakers of Dreamworks, Disney, and other essential players. In the interests of truth, justice and the American Way, we are publishing this transcript verbatim.

What you read in the press: LA Times Headline: July 3, 2002 Ovitz Issues an Apology for Comment About ‘Gay Mafia’

Onetime superagent Michael Ovitz apologized Tuesday for his comments in a Vanity Fair magazine article, due to hit the newsstands today, in which he blames his downfall on a group he calls Hollywood’s “gay mafia.”

“I made some statements that were inappropriate during an open and frank discussion….”

DISSOLVE TO: Back room at Spago in Beverly Hills. There are Drag Queens and Leather Queens seated and posing around a conference table with a centerpiece of Michaelanglo’s David carved out of chopped chicken liver. Don “Rickles” Geffendi sits at the head of the table.

MIKEY OVITZI
Don Geffendi, I want to thank you for helping me organize this — meeting here today. And also the other heads of the Gay Nostra – Mission Street, Sunset Boulevard, Christopher Street and South Beach. Carmina Burana from the West Village — and ah — Washington – Andiamo Sullivani. An’ from The New York Times, we have with us Bernini Weintraubo. And all the other associates that came as far as from Chelsea, and Alphabet City, and all the other cruising zones of the country — thank you.

How did the movie business ever get so gay? I don’t know. It was so — unfortunate — so unnecessary – so bitchy. Eisneri lost a trick — and I lost a trick. We’re quits. And if Eisneri agrees, then I’m willing to — let things go on the way they were before…

GEFFENDI
We’re all grateful to Don Ovitzi for calling this lunch and picking up the check. We all know him as a bitch of his word — a modest bitch — he’ll always listen to above the line profits…

EISNERI
Yes, Don Geffendi — he’s too modest. He had all the cute actors and hunky street hustlers in his pocket. He refused to share them…

MIKEY OVITZI
When — when did I ever refuse an accommodation? All of you know me here — when did I ever refuse to send a buff personal trainer with a jar of olive oil over to the office? — except one time. And why? Because — I believe this Ecstasy-driven chicken hawking business — is gonna destroy us in the years to come. I mean, it’s not like gambling or liquor — even the odd stealth lesbian kiss at a tennis tournament or golf classic — which is something that most people want nowadays, and is forbidden to them by the pezzonovante of the people who cancelled Rosie, Ellen and Politically Correct (Hey, Bill Maher in drag, whatta you think. Should I sign her?) . Even the Clinton Administration that’ve helped us in the past with not asking and not telling and other things are gonna refuse to help us when in comes to chicken hawking. And I believed that — then — and I believe that now.

GEFFENDI
Times have changed. It’s not like the Old Days — when we can do anything we want. A refusal is not the act of a friend. If Don Ovitzi had all the child stars, and the young assistant producers in the Valley, then he must share them, or let us others use them. He must let us draw the water from the well. Certainly he can — present a bill for such services; after all — we are not Members of the Screen Actors Guild.

LOURDINI (after some laughter from the group, stands)

I also don’t believe in chicken hawking, here or at my summer place in Malibu, I don’t care what you read in the papers. For years I paid my tricks extra so they wouldn’t do that kind of business. —

[Eisneri whispers something to his aide]

LOURDINI (continues)
— Somebody comes to them and says, “I have cute butts; if you put up three, four thousand dollar investment — we can make fifty thousand on the Beverly Hills Hotel business alone.” So they can’t resist a cute butt. I want to control it as a business, to keep it respectable, healthy and well-groomed.
(then, as he slams his hand on the table)
I don’t want it near Rodeo Drive — I don’t want to sell children! That’s an infamia. In my city, we would keep the traffic in the free-lance agents — the fifteen-percenters. They’re animals anyway, so let them lose their souls… and test positive.

MIKEY OVITZI
I hoped that we would come here and group hug together. And as a sensitive man I’m willing to do whatever’s necessary to — find a peaceful solution to these problems…

GEFFENDI
Then we are agreed. The traffic in chicken hawking and making sequels and knock-offs to “American Pie” will be permitted, but controlled — and Don Ovitzi will give up chicken hawking east of the Wilshire corridor in the East — and there will be free hot sex all around, and an Oscar for me with no time limit on my acceptance speech.

EISNERI
But I must have strict assurance from Ovitzi — as time goes by and his client list becomes cuter — will he attempt any remakes of “Cruising”?

GEFFENDI
Look — we are all reasonable men here; we don’t have to give assurances as if we were the kind of stone cold bitches that give millions of dollars to lawyers…

You talk about vengeance — is vengeance gonna bring your trick back to you? Or my trick to me? I forgo the vengeance of my trick — But I have selfish desires. My youngest trick — was forced to leave this country, — because of this Hillary Clinton business. All right — and I have to make arrangements to bring him back here safely — cleared of all these false charges of having sex with that woman. But I’m a superstitious bitch — and if some unlucky popper should be snapped under his nose — if he should get bad Acid at a rave — or if he should find himself served with substandard mineral water at a restaurant — or if he’s struck by a case of the vapors — then I’m going to blame some of the bitches in this room. And that, I do not forgive.

[The Don and his trim and youthful assistant move toward the head of the table where Geffendi is sitting. Eisneri does the same. The Don and Eisneri hug as the others applaud]

CUT TO: Inside the Hummer where the Don and youthful assistant are sitting in the rear -night

When I meet with the Eisneri people, should I insist that all his bitches have negative results on the latest bloodwork and their own latex body stockings?

Mention it — don’t insist. Geffendi is a man who’ll know that without being told.

Eisneri’s a pimp — he never’a could’ve outfucked Santino. But I didn’t know until this day that it was — Geffendi all along… 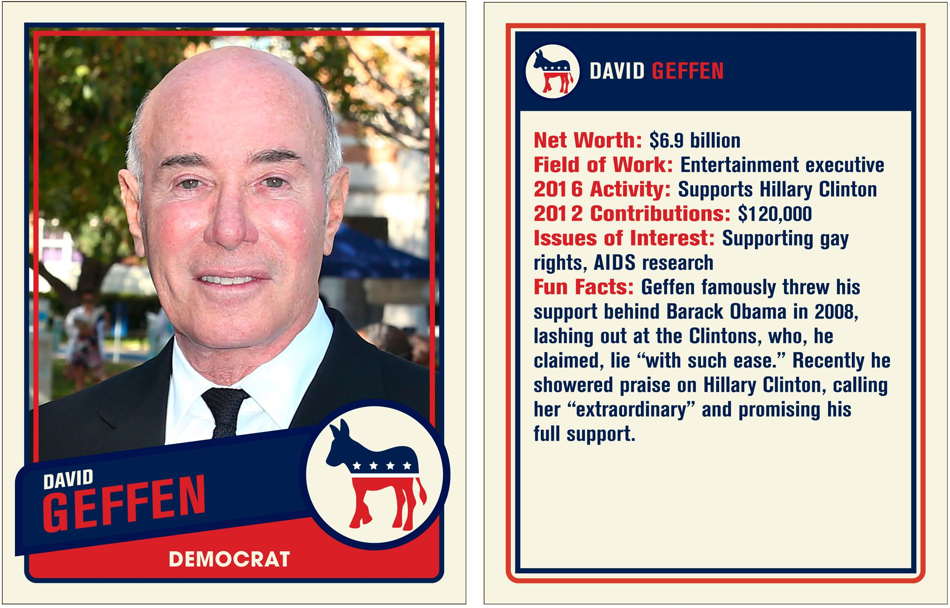