DRIVE BY: “I dream women will someday have the same rights as guns.” 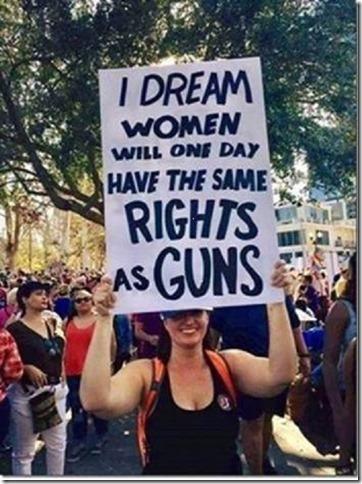 Does that mean that this brilliant liberal wants…

– women to be banned from entering school and college campuses? (Heh. A woman free zone. – GOC)

– women to be banned from any establishment selling alcohol?

– women to be banned from any official government group meetings?(No women in Congress – GOC)

– all women to be banned from all airports?

– you to have to pay a fee to the state before you can have a woman with you?

– some women to be banned outright simply because they look too scary?

– all women to be locked up at all times that they are not in use?

And in this clip, at the end, you will see one mother who was glad, DAMNED GLAD!, that her man had a gun under his control:

“Images taken by the lenses of a security camera show the exact moment when the driver of a car reacted, shot and killed a robber on the corner of the crossroads Jerônimo Pimentel with Dom Romualdo de Seixas, in the neighborhood of Umarizal, in Belém. occurred last Tuesday (21).”

[HT:Knuckledraggin My Life Away | Where Bad Choices Make Good Stories]