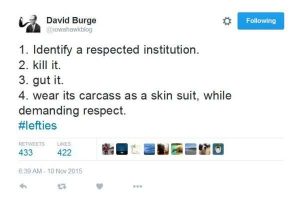 Leftists have a word “entryism”, which they use when privately talking amongst themselves. They never plainly state what entryism is, but if you are part of the in-group, it becomes obvious that they are talking in code. If the chans got hold of some emails about “entryism”, would probably interpret it as referring to satanic rituals involving sex with children.

I don’t know what “pizza” means in the pizzagate emails, other than that it obviously does not mean pizza, but I know what entryism means:

1. Identify a respected institution.
2. kill it.
3. gut it.
4. wear its carcass as a skin suit, while demanding respect

Science died with peer review and is now a skinsuit worn by a demon. As social justice warriors moved into technology companies, the same has happened with technology. If you are a gamer, you will have noticed that you no longer need new hardware every year. If you are a fan of self driving cars, you will have noticed that they can self drive just fine 99.99% of the time, which is 0.01% less than is useful, and that impressive as this is, it is not getting any better, nor is it likely to get any better. Similarly, Google Translate was a gigantic achievement, but no real progress has been made in automatic translation since Google went social justice, quite a long time ago…..

THE PHASES OF A GEEKER GATE
1. SJW CRITICISM – The IP is criticized by SJWs for being racist, sexist, misogynist, homophobic, and a smattering of other things.
2. IP IS ABOUT TO UNDERGO REBOOT – or reimagining, or remake, or whatever term is fashionable at the time.
3. THE BARNACLING – SJWs barnacle themselves to the IP both within its production and without in the fan base, and start lecturing long time fans.

4. FAN CRITICISM – Long time fans of the IP voice legitimate criticism of the new direction.
5. SJW RESPONSE TO FAN CRITICISM – A large fan backlash is created when SJWs both within and without the production falsely accuse critics of being racist, sexist, misogynist, homophobic etc.
6. DISMISSING THE BACKLASH – Media publishes pieces declaring the backlash doesn’t exist.
7. IGNORING THE BACKLASH – Media publishes pieces instructing others to ignore the “tiny vocal minority.”
8. SUPPRESSING THE BACKLASH – Blogs and websites delete or otherwise “redact” critical comments and posts in discussion forums under the aegis of “hate speech.”
9. BACKLASH INTENSIFIES – As an inevitable side effect of suppression, backlashers seek out other venues to express their criticism, and some publish their own, growing the backlash exponentially.
10. HATE HOAXES & FALSE FLAGS – The rank and file SJW activists get heavily involved in shouting down critics, and creating false flags and hate hoaxes in an effort to discredit critics.
11. IP FAILURES – The IP starts to falter as fans drift away and sales plummet.
12. THE DAMSEL IN DISTRESS – A female member of the production (it could also be a gay man) is granted victim status over a fishy event in order to deflect from the failures of the IP, and shame critics into silence.
13. DESPERATE PLEAS FOR COMMUNITY MANAGEMENT – “White Knights” in the media call for creative authorities to smack down the backlash and restore control of the narrative in response to The Damsel In Distress event. Media publishes multiple articles with the same talking points and buzzwords such as “toxic” in an effort to mischaracterize the fan base. Major news outlets report on the story, and quote these “think” pieces as authoritative.
14. ANSWERING THE CALL – Celebrities and creative cast & crew answer the media’s call, and make public statements admonishing critical fans, typically over false accusations.
15. THE FINAL PUSH – Media entities, and rank and file SJWs tell long time fans to go find something else if they don’t like it anymore, in a last ditch effort to push critics out of the “community” once and for all.
16. IP BLEEDING – The IP continues to hemorrhage money, as long time fans continue to abandon the IP in droves.
17. FANBASE OBLITERATION – The fanbase is utterly destroyed, leaving behind only the small handful of SJWs who don’t make any purchases.
18. THE END – The new incarnation of the IP comes to an end. Since the majority of the fan base has abandoned it, there’s no more controversy or discussion about it. It’s over. The best case scenario is that the original IP is largely forgotten with the exception of a few die-hards who still carry the torch. The worst case scenario is that the new incarnation of the IP overwrites the original IP, and the original IP is forgotten altogether and overshadowed by the new incarnation in all future media mentions.
19. MIGRATION – The remaining SJWs jump ship to devour a new IP that is popular, and undergoing a transitional phase.
20. REBIRTH – The process begins anew.

Next post: TOO MUCH WINNING!: “Each point means approximately $3 trillion and 10 million jobs”

Previous post: The Truth About Tariffs And ‘Trade Wars’ [An Extract]