The Crazy Years and their Empty Moral Vocabulary by John C. Wright 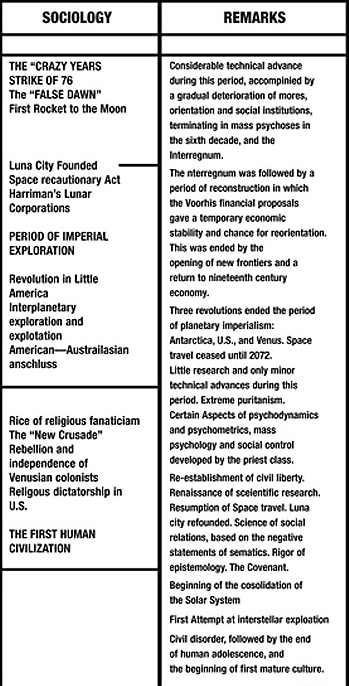 “What Heinlein failed to predict was that the Crazy Years would simply continue up through 2010, with no sign of slackening. Ladies and gentlemen, we live in the Crazy Years.

“While Heinlein (as far as I know) supplied no rationale for the advent and the recession of the craziness in the Crazy Years, A. E. van Vogt was freer with is speculations: insanity, either of individuals or of peoples, in van Vogt’s stories (and perhaps in the theories of I. B. Korzybski, who discovered or invented General Semantics) is caused by a fracture or disjunction between symbol and object. When your thought and the thing about which you think do not match up on a cognitive level, that is a falsehood, a false belief. When the emotions associated with the thought do not match to the thing about which you think, that is a false-to-facts association, which can range from merely a mistake to neurosis to psychosis, depending on the severity of the disjunction. You are crazy. If you hate your sister because she reminds you of your mother who beat you, that association is false-to-facts, neurotic. If you hate your sister because you have hallucinated that you are Cinderella, that association is falser-to-facts, more removed from reality, possibly psychotic. The great and dire events of the early Twentieth Century no doubt confirmed Korzybski in the rightness of this theory.

“Nothing prevents a race of people from contracting and fomenting a false-to-facts belief: the fantasies of the Nazi Germans, pseudo-biology and pseudo-economics combined with the romance of neo-paganism, stirred the psyche of the German people for quite understandable reasons. From the point of view of General Semantics, the Germans had divorced their symbols from reality, they mistook metaphors for truth, and their emotions adapted to and reinforced the prevailing narrative. They told themselves stories about Wotan and the Blood, about being betrayed during the Great War, about needing room to live, about the wickedness of Jewish bankers and shopkeepers, about the origin of the wealth of nations—and they went crazy.

“The Russians, earlier, and for equally psychological and psychopathic reasons told themselves an admittedly more coherent story about history and destiny, taken from a Millenarian cultist named Marx, and they were, on an emotional level even if not on a cognitive level, convinced that shedding the blood of millions would bring about wealth as if from nowhere. And, because they used the word “scientific” to describe their brand of socialism, they actually thought their play-pretend neurotic story was a scientific theory that had been discovered by rigorous ratiocination—and they went crazy.

“Berlin was bombed into submission during the Second World War, and the Berlin Wall collapsed along with the Soviet Empire at the end of the Cold War. But the modern methods of erecting false-to-facts dramas appealing to mass psychology, once discovered, did not fall when their practitioners fell: scientific socialism, naziism, fascism, communism, all have in common the subordination of word-association to political will. All these doctrines have a common ancestor, which is the social engineering theory of language: if you change the connotation of word, so the theory runs, you change the connotations of thoughts. General Semantics says that if an individual, or whole people en mass, adopt deliberately false beliefs, supported by deliberately manipulative word-uses, he or they will have increasingly unrealistic and maladaptive behaviors. Introduce Political Correctness, ignore factual correctness, and the people will go crazy.

“The main sign of when madness has possessed a crowd, or a civilization, is when the people are fearful of imaginary or trivial dangers but nonchalant about real and deep dangers. When that happens, there is gradual deterioration of mores, orientation, and social institutions—the Crazy Years have arrived.

“Craziness can be measured by maladaptive behavior. The behavior the society uses to solve one kind of problem, when applied to an incorrect category, disorients it. When this happens the whole society, even if some members are aware of the disorientation, cannot reach the correct conclusion, or react in a fashion that preserves society from harm. As if society were a dolphin that called itself a fish: when it suffered the sensation of drowning, it would dive. But a dolphin is a mammal, a member of a different category of being. When dolphins are low on air, they surface, rather than dive. Putting yourself in the wrong category leads to the wrong behavior.”

Next post: Confirmed: Ann Barnhardt Taken Offline {Back Up Now at New Host}