“Congress shall make no law respecting an establishment of religion, or prohibiting the free exercise thereof..”

From A Biblical Case for the Church’s Duty to Remain Open by John MacArthur –senior pastor of Grace Community Church. As of 2008, the average weekly attendance was 8,258. 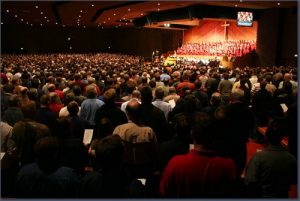 Christ is Lord of all. He is the one true  head of the church (Ephesians 1:22; 5:23; Colossians 1:18). He is also King of kings—sovereign over every earthly authority (1 Timothy 6:15; Revelation 17:14; 19:16). Grace Community Church has always stood immovably on those biblical principles. As His people, we are subject to His will and commands as revealed in Scripture. Therefore we cannot and will not acquiesce to a government-imposed moratorium on our weekly congregational worship or other regular corporate gatherings. Compliance would be disobedience to our Lord’s clear commands.

The right we are appealing to was not created by the Constitution.

While civil government is invested with divine authority to rule the state, neither of those texts (nor any other) grants civic rulers jurisdiction over the church. God has established three institutions within human society: the family, the state, and the church. Each institution has a sphere of authority with jurisdictional limits that must be respected. A father’s authority is limited to his own family. Church leaders’ authority (which is delegated to them by Christ) is limited to church matters. And government is specifically tasked with the oversight and protection of civic peace and well-being within the boundaries of a nation or community. God has not granted civic rulers authority over the doctrine, practice, or polity of the church. The biblical framework limits the authority of each institution to its specific jurisdiction. The church does not have the right to meddle in the affairs of individual families and ignore parental authority. Parents do not have authority to manage civil matters while circumventing government officials. And similarly, government officials have no right to interfere in ecclesiastical matters in a way that undermines or disregards the God-given authority of pastors and elders.

Notice that we are not making a constitutional argument, even though the First Amendment of the United States Constitution expressly affirms this principle in its opening words: “Congress shall make no law respecting an establishment of religion, or prohibiting the free exercise thereof.” The right we are appealing to was not created by the Constitution. It is one of those unalienable rights granted solely by God, who ordained human government and establishes both the extent and the limitations of the state’s authority (Romans 13:1–7). Our argument therefore is purposely not grounded in the First Amendment; it is based on the same biblical principles that the Amendment itself is founded upon. The exercise of true religion is a divine duty given to men and women created in God’s image (Genesis 1:26–27; Acts 4:18–20; 5:29; cf. Matthew 22:16–22). In other words, freedom of worship is a command of God, not a privilege granted by the state.

An additional point needs to be made in this context. Christ is always faithful and true (Revelation 19:11). Human governments are not so trustworthy. Scripture says, “the whole world lies in the power of the evil one” (1 John 5:19). That refers, of course, to Satan. John 12:31 and 16:11 call him “the ruler of this world,” meaning he wields power and influence through this world’s political systems (cf. Luke 4:6; Ephesians 2:2; 6:12). Jesus said of him, “he is a liar and the father of lies” (John 8:44). History is full of painful reminders that government power is easily and frequently abused for evil purposes. Politicians may manipulate statistics and the media can cover up or camouflage inconvenient truths. So a discerning church cannot passively or automatically comply if the government orders a shutdown of congregational meetings—even if the reason given is a concern for public health and safety.

The church by definition is an assembly. That is the literal meaning of the Greek word for “church”—ekklesia—the assembly of the called-out ones. A non-assembling assembly is a contradiction in terms. Christians are therefore commanded not to forsake the practice of meeting together (Hebrews 10:25)—and no earthly state has a right to restrict, delimit, or forbid the assembling of believers. We have always supported the underground church in nations where Christian congregational worship is deemed illegal by the state.

Although we in America may be unaccustomed to government intrusion into the church of our Lord Jesus Christ, this is by no means the first time in church history that Christians have had to deal with government overreach or hostile rulers. As a matter of fact, persecution of the church by government authorities has been the norm, not the exception, throughout church history. “Indeed,” Scripture says, “all who desire to live godly in Christ Jesus will be persecuted” (2 Timothy 3:12). Historically, the two main persecutors have always been secular government and false religion. Most of Christianity’s martyrs have died because they refused to obey such authorities. This is, after all, what Christ promised: “If they persecuted Me, they will also persecute you” (John 15:20). In the last of the beatitudes, He said, “Blessed are you when people insult you and persecute you, and falsely say all kinds of evil against you because of Me. Rejoice and be glad, for your reward in heaven is great; for in the same way they persecuted the prophets who were before you” (Matthew 5:11–12).

As government policy moves further away from biblical principles, and as legal and political pressures against the church intensify, we must recognize that the Lord may be using these pressures as means of purging to reveal the true church. Succumbing to governmental overreach may cause churches to remain closed indefinitely. How can the true church of Jesus Christ distinguish herself in such a hostile climate? There is only one way: bold allegiance to the Lord Jesus Christ.

Even where governments seem sympathetic to the church, Christian leaders have often needed to push back against aggressive state officials. In Calvin’s Geneva, for example, church officials at times needed to fend off attempts by the city council to govern aspects of worship, church polity, and church discipline. The Church of England has never fully reformed, precisely because the British Crown and Parliament have always meddled in church affairs. In 1662, the Puritans were ejected from their pulpits because they refused to bow to government mandates regarding use of the Book of Common Prayer, the wearing of vestments, and other ceremonial aspects of state-regulated worship. The British Monarch still claims to be the supreme governor and titular head of the Anglican Church.

But again: Christ is the one true head of His church, and we intend to honor that vital truth in all our gatherings. For that preeminent reason, we cannot accept and will not bow to the intrusive restrictions government officials now want to impose on our congregation. We offer this response without rancor, and not out of hearts that are combative or rebellious (1 Timothy 2:1–8; 1 Peter 2:13–17), but with a sobering awareness that we must answer to the Lord Jesus for the stewardship He has given to us as shepherds of His precious flock.

To government officials, we respectfully say with the apostles, “Whether it is right in the sight of God to give heed to you rather than to God, you be the judge” (Acts 4:19). And our unhesitating reply to that question is the same as the apostles’: “We must obey God rather than men” (Acts 5:29).

Our prayer is that every faithful congregation will stand with us in obedience to our Lord as Christians have done through the centuries.

RTWT: Christ, not Caesar, Is Head of the Church