Columbus Day: Not about Columbus, not about the indians (aka “indigenous people who walked here and then started killing each other”) 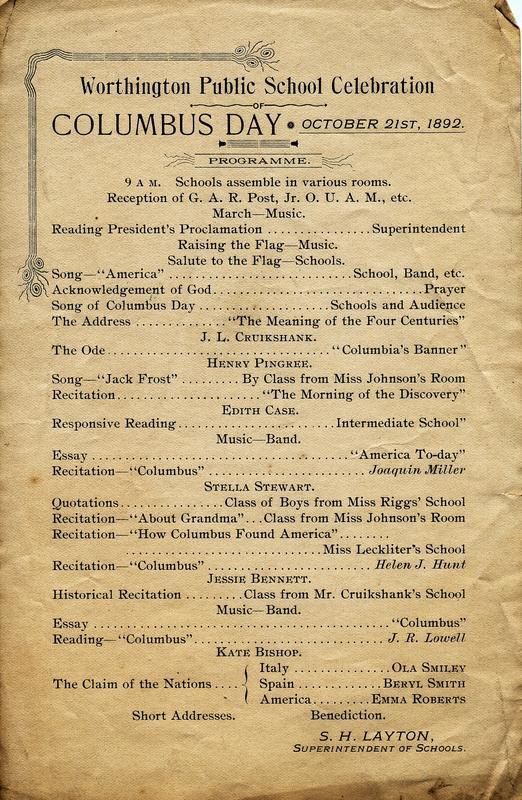 Although Columbus Day did not become an official annual holiday of the United States until 1934, President Benjamin Harrison (1833–1901), acting according to a joint resolution of both houses of Congress, proclaimed a national holiday to commemorate the 400th anniversary of Columbus’ voyage. Delivered on July 21, 1892, ahead of the Chicago Columbian Exposition to be held October of that same year, Harrison’s remarks made special mention of the school ceremonies that would “impress upon our youth the patriotic duties of American citizenship.” It was during these ceremonies that a new salute to the American flag—authored by Francis Bellamy—was recited by school children across the country: “I pledge allegiance to my Flag and the Republic for which it stands, one Nation, indivisible, with liberty and justice for all.”

Whereas by a joint resolution approved June 29, 1892, it was resolved by the Senate and House of Representatives of the United States of America in Congress assembled—

That the President of the United States be authorized and directed to issue a proclamation recommending to the people the observance in all their localities of the four hundredth anniversary of the discovery of America, on the 21st of October, 1892, by public demonstrations and by suitable exercises in their schools and other places of assembly.

Now, therefore, I, Benjamin Harrison, President of the United States of America, in pursuance of the aforesaid joint resolution, do hereby appoint Friday, October 21, 1892, the four hundredth anniversary of the discovery of America by Columbus, as a general holiday for the people of the United States. On that day let the people, so far as possible, cease from toil and devote themselves to such exercises as may best express honor to the discoverer and their appreciation of the great achievements of the four completed centuries of American life.

Columbus stood in his age as the pioneer of progress and enlightenment. The system of universal education is in our age the most prominent and salutary feature of the spirit of enlightenment, and it is peculiarly appropriate that the schools be made by the people the center of the day’s demonstration. Let the national flag float over every schoolhouse in the country and the exercises be such as shall impress upon our youth the patriotic duties of American citizenship.

In the churches and in the other places of assembly of the people let there be expressions of gratitude to Divine Providence for the devout faith of the discoverer and for the divine care and guidance which has directed our history and so abundantly blessed our people.

In testimony whereof I have hereunto set my hand and caused the Seal of the United States to be affixed.

Done at the city of Washington, this 21st day of July, A.D. 1892, and of the Independence of the United States the one hundred and seventeenth.

Previous post: “Time to bring them home.” President Donald Trump and the Dead at Dover