Civilization spans but an inch of time. 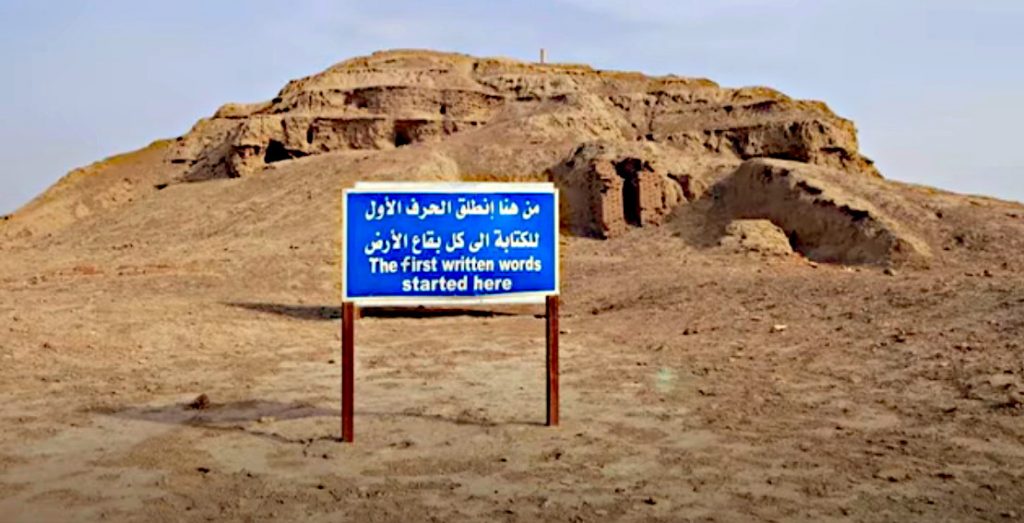 Founded in 5,000 BC Uruk played a leading role in the early urbanization of Sumer in the mid-4th millennium BC. At its height c. 2900 BC, Uruk probably had 50,000–80,000 residents living in of walled area; making it the largest city in the world at the time. The legendary king Gilgamesh, according to the chronology presented in the Sumerian king list, ruled Uruk in the 27th century BC. The city lost its prime importance around 2000 BC, in the context of the struggle of Babylonia against Elam, but it remained inhabited throughout the Seleucid (312–63 BC) and Parthian (227 BC to 224 AD) periods until it was finally abandoned shortly before or after the Islamic conquest of 633–638.

5,600 years is a pretty good run for a city, but that’s what inventing writing can do for a tribe.

The Epic of Gilgamesh: Tablet I

He carved on a stone stela all of his toils,
and built the wall of Uruk-Haven,
the wall of the sacred Eanna Temple, the holy sanctuary.
Look at its wall which gleams like copper(?),
inspect its inner wall, the likes of which no one can equal!
Take hold of the threshold stone–it dates from ancient times!
Go close to the Eanna Temple, the residence of Ishtar,
such as no later king or man ever equaled!
Go up on the wall of Uruk and walk around,
examine its foundation, inspect its brickwork thoroughly.
Is not (even the core of) the brick structure made of kiln-fired brick,
and did not the Seven Sages themselves lay out its plans?
One league city, one league palm gardens, one league lowlands, the open area(?) of the Ishtar Temple,
three leagues and the open area(?) of Uruk it (the wall) encloses.
Find the copper tablet box,
open the … of its lock of bronze,
undo the fastening of its secret opening.
Take and read out from the lapis lazuli tablet
how Gilgamesh went through every hardship.

“Nothing beside remains. Round the decay
Of that colossal Wreck, boundless and bare
The lone and level sands stretch far away.”
(1818 AD)