Every day it does not rain, and many days when it does, this man walks three miles to the Pike Street public market in Seattle to play long  alien notes on his Chinese instrument. 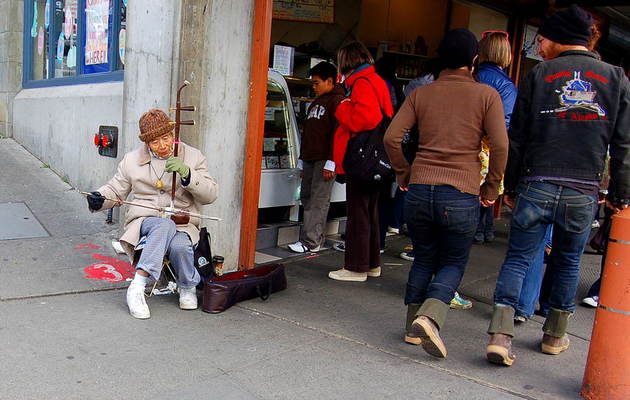 You walk by him on your way to the Athenian Cafe in the market. He’s got a couple of bucks and change in his begging cup so you toss in a couple more. When you come out of the restaurant an hour or so later, he’s got what he had, what you gave him, and a couple of quarters more. Almost everyone is ignoring him. He plays on.

Seattle is a second-level city mostly famous in popular culture for a second-rate rock band who did not so much invent “grunge” as simply show up on stage playing and wearing it. The band and its lead singer have been in different stages of dead for decades now, but their style lives on in Seattle like the galvanic twitches in the corpse of a frog long after it has been pithed. Seattle’s left with a zombie pop culture whose only hope for survival is feeding on the brains of the bovine young. That’s thin gruel for a zombie, but Seattle’s “cultural scene” is eking out an undead living with inspirational shows such as this: 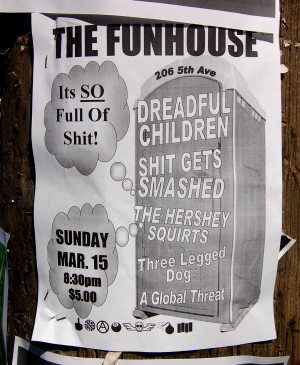 Lest you misunderstand, the names on the portable outhouse door are band names. If you attend this venue of “cutting-edgy” and oh-so-transgressive “creativity” you can hear hymns to little monsters, excrement, liquid excrement, maimed animals, and vague apocalyptic rumors. If you are fortunate your ears will not bleed as part of the “fun.” Make no mistake about it, the names of the bands will be the best thing about them. In fact, the poster itself tells you so in no uncertain terms.

I don’t think the old Chinese musician in the market will get into this club unless it is to make five bucks for scraping the roaches, rubbers, and lost drugs works off the floor, and to mop out the toilets. It’s pretty much how “youth culture” rolls in this second-level city.

Postmortem effects. The twitching of the pithed.

But of course that’s just “pop” culture and it’s pretty much drained of the new, the beautiful and the true everywhere. There’s always “haute” culture to turn to, isn’t there?

Let us go then, you and I…. to the acclaimed and recently redone Seattle Museum of Art. It’s just a couple of blocks from the old Chinese musician in the market. It’s recently undergone one of its relentless expansions under the watchful gaze of Bill Gates mom. The entrance is vaulting. Vaulting enough to have room for an extremely awful sculpture of five or six bad cars hanging from the ceiling with sticks of lights spurting from them in a vague pattern. What does it all mean? Well, in the words of R. Crumb’s Mr. Natural, “It don’t mean shit.”

But wait, surely with the Gates family doing the heavy fund-raising lifting, this cathedral to high art in the 21st century is light years beyond the grunge and excrement of the pop culture music scene? It just has to be, doesn’t it.

Of course not. Here’s what you see enshrined in the dead center of the main exhibit floor of the Seattle Art Museum: 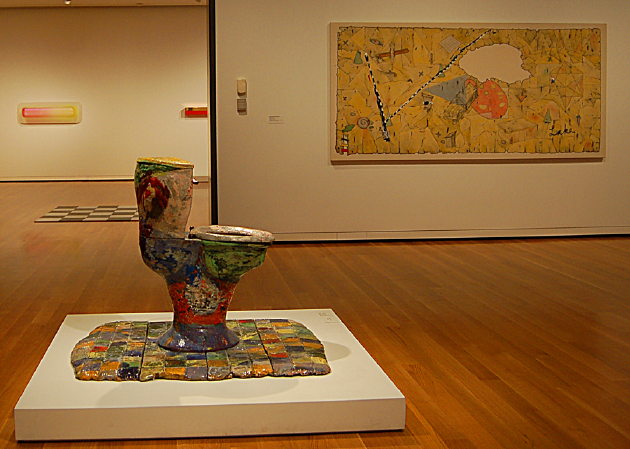 Yes, that’s a museum-quality ceramic toilet by one of my old art teachers, the late Robert Arneson. I studied under him for a couple of terms at the University, and he was an amazing man, and not a bad sculptor, but still second-level when confined to his era. He’ll be virtually unknown in another 50 years and this particular piece will be part of the reason. Even though it gets pride of place in the Seattle Art Museum, it is — to say the least — one of the worst Arneson’s around and he has many. Still, a third-rate collection in a second level city has to take what it can get.

On the wall to the right is, as it happens, another third-rate work by another of my instructors, the painter William Wiley. Wiley can be an interesting and amusing, if obtuse, painter, but the one seen here gives you no more close-up than it does as a smudge in this photograph. It fits right to the collection of SAM though. It’s a museum where many artists are represented but none well. The museum seems to buy the names but not the quality. Deep down, it’s shallow.

The single area in which the museum excels is the one area, of course, that is given short shrift; the totem poles, lodge carvings, masks, and ceremonial costumes of the Native American tribes of the Northwest Coast of North America. The collection, so I am told, is vast and world-class. Hence SAM hides most of it away so that more toilets of clay can be exhibited.

Long ago, the natives of Seattle wore clothes like this: 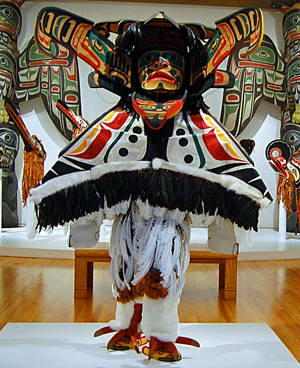 Today, the descendants of those same tribes wear clothes like this: 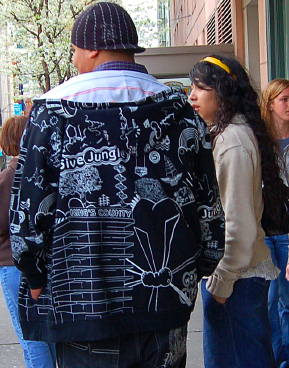 Just the gear for a great night out at The Funhouse listening to “Shit Gets Smashed” and “The Hershey Squirts.”

When I went back to the market to catch the bus I passed by the Chinese musician again. He’d made another couple of bucks from putting the music of a thousand years ago into the streets of the second level city of Seattle. When the bus finally came, I was encouraged to see that there was even more haute culture coming our way: 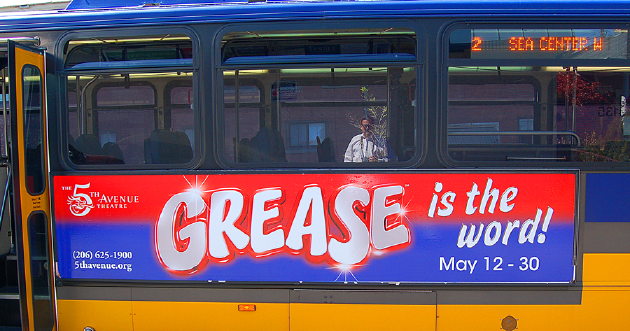