HANDI don’t know about anyone else but I’m still struggling to find a “common denominator” for all these lootings and riots and drive-by shooting in Chicago. Any insights?

It’s called a pandemic, people. This reckless behavior on Montrose Beach is what will cause us to shut down the parks and lakefront. Don’t make us take steps backwards. pic.twitter.com/FHxeYfH7Wf

Next day in downtown: 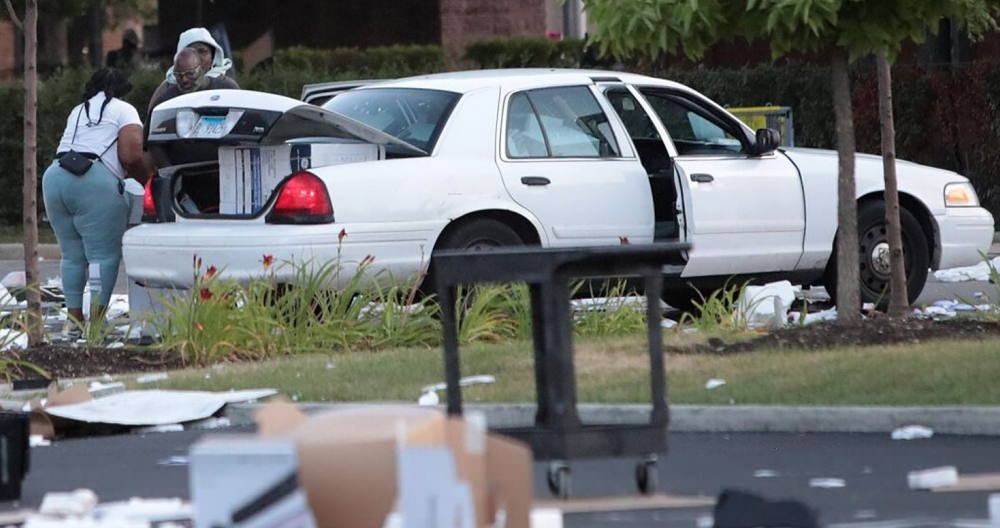 “This is not a protest. It’s bullsh*t what’s going on.” Mass looting hits Chicago. pic.twitter.com/IEGlhgcclU

Hog Butcher for the World,
Tool Maker, Stacker of Wheat,
Player with Railroads and the Nation’s Freight Handler;
Stormy, husky, brawling,
City of the Big Shoulders:

They tell me you are wicked and I believe them, for I have seen your painted women under the gas lamps luring the farm boys.

Come and show me another city with lifted head singing so proud to be alive and coarse and strong and cunning.
Flinging magnetic curses amid the toil of piling job on job, here is a tall bold slugger set vivid against the little soft cities;
Fierce as a dog with tongue lapping for action, cunning as a savage pitted against the wilderness,

They just hit an #AppleStore in #Chiraq. Chicago looting is out of control. Mass-looting the entire night in the #GoldCoast. #ChicagoRiots #ChicagoScanner $AAPL #Apple #IPhone 👀🤯🦉 pic.twitter.com/IQELDRZ7Ft

just in the past 30 minutes (Chicago) pic.twitter.com/ORxO8vO2X4

Under the smoke, dust all over his mouth, laughing with white teeth,
Under the terrible burden of destiny laughing as a young man laughs,

Moats and drawbridges back in fashion as America searches for ways of defending properties from the mob. https://t.co/rB6KGtduIp

No doubt Mayor Lightfoot will be on hand to praise the looters for their bravery in ransacking every store last night, and condemn the cops for even trying to stop them.

But not before she has some sunbathers arrested, of course. The beach is sacred to her kind—the fish people.

Laughing even as an ignorant fighter laughs who has never lost a battle,
Bragging and laughing that under his wrist is the pulse, and under his ribs the heart of the people,
Laughing!
Laughing the stormy, husky, brawling laughter of Youth, half-naked, sweating, proud to be Hog Butcher, Tool Maker, Stacker of Wheat, Player with Railroads and Freight Handler to the Nation.

Next post: Just Another Late-Night Shopping Spree to Honor the Memory of Floyd George!

Previous post: Americans have been spending waaaay too much time in the house.