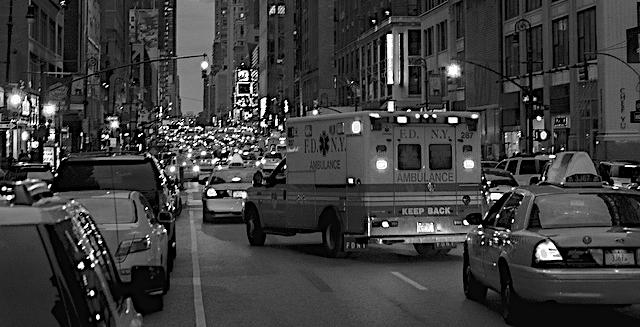 We’d strapped him to his bed for over a year,
Paid a fat, black woman to wear a white dress
Change his bedpan, and sit with him at night,
But when the bone white pigeon banked
Between the buildings in a pale twilight
The old man’s brain liquefied.

Foam, whose  bubbles reflected my face,
Bloomed on his lips as he swallowed his tongue.
It said 5:47 on the red crystal clock by the wet bar,
And his breath rattled in the room like some
Tired exhaust fan from the Roaring Twenties.

His wife was out shopping at Woolworths,
Or trying to sell something back to Cartiers.
The black nurse was downstairs flirting
With Desi the tap-dancing doorman.
Prince the chauffeur buffed the black Lincoln
And wondered what he’d do when the old lady died.
My wife was teasing our toddler in the living room.
Everyone else was trying to get home from work.

Somewhere inside his skull the skinned nerves
Kept sending signals down his spine to his heart.
And I blotted his lips in that burnt orange room
As his arms flapped like a beached fish before
The fisherman brings down the club.

I turned from the bed, pulled up the beige blinds,
And gazed out the window wondering
Where the bone white pigeon had gone.
Then I called the Doctor’s number listening
To his wheezing until the call was answered.

“He’s dying,” I said to the man I’d never met.
“You should send an ambulance and a team
Of medics right now. He’s going. Going fast.”

The calm voice answered from far across town,
“He’s home. He’s been dead for a year, you know.
We just change the sheets and pay the nurses.
I can keep his body going as long — as long —
As long as you want. You need to tell me.
Look outside. How heavy’s the crosstown traffic?”

I looked down on a solid ribbon of slow oozing steel.
“Wedged,” I said. “Hardly moving at all.”

“Look at his eyes,” the voice said. I looked
Down into his eyes and they had no bottom.
“Who’s there?” the voice asked on the phone.

“No one I know,” I said. “No one at all.”
I held the phone and waited, looking out over Central Park.

“I’ll send an ambulance when you tell me,” he said.

The bone white pigeon came sweeping out of the light
And settled on the sill as calm as my breath in the room.

“Send them when you can,” I said. “No rush.
They’ll just get caught in traffic.”

Next post: Something Wonderful: FabRats Takes a Roadtrip [UPDATED WITH PART 2 OF 3]

Previous post: The Shades of Green in the Green Shade.