Bobbitization: The Press and the Pornography of Violence as Seen from 1994

(AKA “The more things change the more they remain the same.”)

Many years ago I was a member of one of the first Facebooks, the WELL. This was a members-only online community that exists to this day. One of my jobs was to run the “Media Conference” and when I left I took a backfile of my years of contributions. I was scrolling through that backfile yesterday when I came across this partial-rant of mine from 1994. Although ostensibly about the Lorena Bobbit incident it also reveals that nothing has changed in the way the media works in 25 years. Nothing at all except that it uses far less paper and far more electricity. And this year, of course, it is 25 years later and “Lorena” is a special movie on Amazon. No doubt it casts the mad Bobbitizer as a heroic and strong woman who struggled against the patriarchy. Sigh. Right. Next.

To say that for generations the press has “ignored race, gender and homosexuality” is, of course, true if you want to include all generations since say the invention of movable type. But to say the press has ignored these three subjects in any way in the reasonably recent past — 10-20 — years must mean that the press you are touting has been publishing on the Planet Mars for the lichen.

If anything the press is obsessed with race, gender, and homosexuality. The press is also obsessed with itself as a kind of oracle — some magical collection of priests and myths that sees deeper meanings everywhere and is *so*willing*to*share* their insights — regardless of how puerile or off base those insights may be.

I’m constantly amazed at scribblers insisting on some fundamental difference between tabloid journalism and regular journalism. It seems to me that the only essential difference between them is one of timing and degree; tabloids are quicker and more intense in their hand-waving. The vast preponderance of journalism — be it print or electronic media — is TABLOID journalism. Some media mavens just use bigger words, more pretentious analysis, and strain at gnats harder with higher-paid hacks. The percentage of journalists who are real intellectuals and scholars of history and society is very, very slim. The vast majority are simply hacks — good hacks, bad hacks, smart hacks, nice hacks, dumb hacks, old hacks, child hacks — all kinds of hacks. I love and admire and follow the work of many, but I don’t fool myself into thinking these folks have depths to them in which you could sink the Titanic.

The idea that we *learn* from the stories the press spins out of its spinnerets is vastly oversold by the press itself for reasons of self-image, economics, and self-aggrandizement. The constant puffing up of tawdry tragedies, has-beens, dumb domestic couples, and other marginally significant people and celebrities is one of the minor spiritual viruses the press has injected into this demented decade. 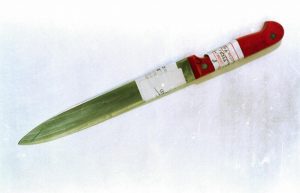 We say that this particular incident of Lorena Bobbit’s Bobbitization of her sleazy hubby lets us *learn* about the vast unreported epidemic of the abuse of females by males in this culture. I mean really. Does anyone who has been breathing through their nose in the world for the last twenty years think dome sic abuse doesn’t happen much too often and is a great problem for families and society and the abusers and the abused?

Indeed, isn’t it actually more amazing that — given the level to which the War Between The Sexes has been pitched, the struggles that people have with economic circumstances, the divorce rate, the sexual tensions, and all the other “problems” that people now face — isn’t is actually amazing that physical abuse  of women isn’t much, much higher than it actually is? 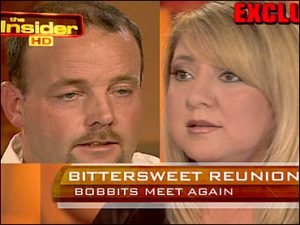 I mean, take a look around. The whole society is rapidly dissolving into a myriad of special interest groups that are all — on one level or another — “just asking for it.”

We carp about the level of violence and at the same time are running an in-your-face society. All things considered, America is much more peaceful than it should be.

Looking at the social dramas played out in the media in the last year — and stripping them of all the drool that pundits of all levels have spattered over them — you have a very tawdry collection of dramas. Not at all the stuff of high tragedy or deep myth that should power and steer a mature society.

Dumb and graceless working class figure skater wants to win medal and get money and hires bumbling bozos to beat on rivals knees in an incompetant manner.

Fading has-been celebrity slaughters wife who has divorced him.

No wonder so many people like to watch. They enjoy being their daily digital manipulation.

The media is made of massive lies and these lies aren’t teaching stories. These are just examples of the pornography of violence. Be sure to have a hot washcloth on hand while reading.

Previous post: True but Forbidden # 45: From The Seven Stages of Trump Derangement Grief to the Iron Law of Bureaucracy