Before the Fall: Grouse Hunting in the Highlands

[Off-Topic Item of the Day: I’m taking a brief break from the insanity of today by remembering the insanities of yesterday.] 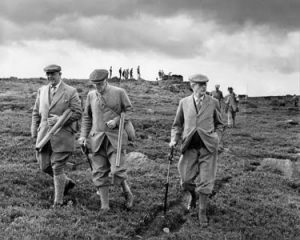 Once upon a time, in the late 1970s, when I was the Managing Director of Penthouse in London and Europe, I spent a weekend at a manorhouse having, as they said then, a go at grouse hunting. I trudged out in my fresh tweeds on the first miserably wet and cold first day. With a host-suppled Purdey and limitless ammunition, I blasted away at these whirring feather balls startled from the heather, but I bagged zero zip nada. I drank from my flask in the field as did the other dozen or so men on this outing and participated in a gigantic expenditure of ammunition. The whole thing rattled me so much that I stayed in bed the next day lying that I had a bad cold. My then-wife and I fled as soon as it was polite to do so. A nasty weekend that I remember for the bizarre slaughter and the lack of central heating in the manor house.

This is still rather a smart sport: even the grouse has a double-barrelled name: Lagopus Lagopus Scoticus. There is a correspondingly acute awareness of social nuances among the guns themselves. A novice kitted out in brand-new knickerbockers and deerstalker might as well wear one of those conference badges saying “Hedge fund manager”. A gentleman will be wearing tweeds weathered to the same consistency as the suit of armour his ancestor wore at Agincourt.

If he has been obliged to replace his Barbour since last season, he may take the precaution of driving his tractor over it several times. Nor should the olfactory sense be neglected: if you cannot out-stink the wet gun-dogs, your bona fides may be suspect. It should be noted, too, that protocol dictates that shooting another gun dead is an unfortunate accident; winging a beater or, worse, a keeper is unforgivable.

It is not necessarily ill-bred to shoot a human quarry: some of our best-born sportsmen had form. The Duke of Wellington was more lethal on the moor than on the battlefield. While visiting Lord Granville in 1823, he accidentally shot him in the face. When shooting at Lady Shelley’s, he hit one of her tenants who was hanging out her washing. “My lady, I’ve been hit!” moaned the victim. To which Lady Shelley replied: “You have endured a great honour today, Mary — you have the distinction of being shot by the Duke of Wellington.” More recently, Willie Whitelaw notoriously winged a keeper and simultaneously shot an old friend in the buttocks, after which he courteously gave up shooting.

RTWT ABOUT THIS CORINTHIAN SPORT AT: Never Yet Melted » The Glorious Twelfth

Next post: When the Rulers are not sufficiently afraid of the People you can hear the guillotine’s timbers being milled