Bear With Me: When Pepper Spray’s Got Nothing to Say to the Bear Eating Your Leg 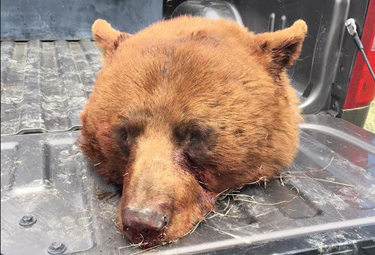 Bear and man stopped downslope, wedged into brush and boulders. Bridger could feel the bear and frantically attempted to disentangle. The bear reared erect, jaws ready to strike. Bridger shot him again, in the front of his chest before falling/sliding further down the slope. The bear pursued him. He screamed at Janelle to stay away.

Bridger tried to kick the bear away from him as it tried to get at his upper body. He couldn’t shoot for fear of hitting his own legs.

The bear dodged a kick, and grabbed Bridger’s right inner thigh in its jaws, lifting him like a dog lifting a rabbit. Bridger shoved the muzzle of the GLOCK against the bear’s neck, trying to shatter its spine and shut the bear down. He fired.

The bear released his lower thigh, then grabbed his calf, just below the knee. The shot missed the spine. Man and bear are still moving fast, but in Bridger’s hyper-aware state, time slowed. He saw an opportunity for a headshot and pressed the trigger on the GLOCK.

Later, Bridger found bear hair between the guide rod and the slide of the G20 pistol. The hair prevented the slide from returning into battery. Bridger knew he should still have ammunition left in the magazine, so he racked the slide and saw a live round eject in slow motion.

Fractions of a second later, another opportunity for a head shot presented itself. The bear ripped at his leg. As the bear tried to tear off his calf muscle, Bridger saw his chance and pressed the trigger.

Man and bear went down together, rolling and sliding a bit further down the slope…

Next post: On the Epidemic of Political Gold-Digging Whores