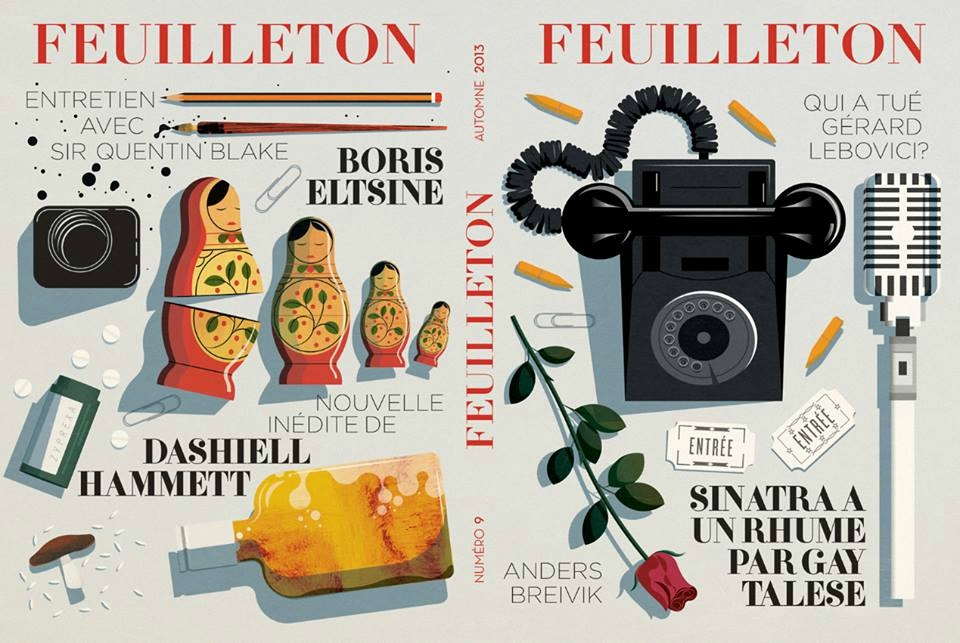 We must confess that we cannot provide an unequivocal definition of those products from which the age takes its name, the feuilletons. They seem to have formed an uncommonly popular section of the daily newspapers, were produced by the millions, and were a major source of mental pabulum for the reader in want of culture. They reported on, or rather “chatted” about, a thousand-and-one items of knowledge. It would seem, moreover, that the cleverer among the writers of them poked fun at their own work. Ziegenhalss, at any rate, contends that many such pieces are so incomprehensible that they can only be viewed as self-persiflage on the part of the authors. Quite possibly these manufactured articles do indeed contain a quantity of irony and self-mockery which cannot be understood until the key is found again.

The producers of these trivia were in some cases attached to the staffs of the newspapers; in other cases they were free-lance scriveners. Frequently they enjoyed the high-sounding title of “writer,” but a great many of them seem to have belonged to the scholar class. Quite a few were celebrated university professors.

Among the favorite subjects of such essays were anecdotes taken from the lives or correspondence of famous men and women. They bore such titles as “Friedrich Nietzsche and Women’s Fashions of 1870,” or “The Composer Rossini’s Favorite Dishes,” or “The Role of the Lapdog in the Lives of Great Courtesans,” and so on. Another popular type of article was the historical background piece on what was currently being talked about among the well-to-do, such as “The Dream of Creating Gold Through the Centuries,” or “Physico-chemical Experiments in Influencing the Weather,” and hundreds of similar subjects. When we look at the titles that Ziegenhalss cites, we feel surprise that there should have been people who devoured such chitchat for their daily reading; but what astonishes us far more is that authors of repute and of decent education should have helped to “service” this gigantic consumption of empty whimsies. Significantly, “service” was the expression used; it was also the word denoting the relationship of man to the machine at that time.

In some periods interviews with well-known personalities on current problems were particularly popular. Ziegenhalss devotes a separate chapter to these. Noted chemists or piano virtuosos would be queried about politics, for example, or popular actors, dancers, gymnasts, aviators, or even poets would be drawn out on the benefits and drawbacks of being a bachelor, or on the presumptive causes of financial crises, and so on. All that mattered in these pieces was to link a well-known name with a subject of current topical interest. The reader may consult Ziegenhalss for some truly startling examples; he gives hundreds.

As we have said, no doubt a goodly dash of irony was mixed in with all this busy productivity; it may even have been a demonic irony, the irony of desperation — it is very hard indeed for us to put ourselves in the place of those people so that we can truly understand them. But the great majority, who seem to have been strikingly fond of reading, must have accepted all these grotesque things with credulous earnestness.

A torrent of zealous scribbling poured out over every ephemeral incident, and in quality, assortment, and phraseology all this material bore the mark of mass goods rapidly and irresponsibly turned out. 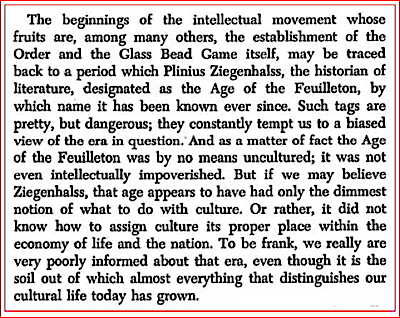 Incidentally, there appear to have been certain games which were regular concomitants of the feature article. The readers themselves took the active role in these games, which put to use some of their glut of information fodder. A long disquisition by Ziegenhalss on the curious subject of “Crossword Puzzles” describes the phenomenon. Thousands upon thousands of persons, the majority of whom did heavy work and led a hard life, spent their leisure hours sitting over squares and crosses made of letters of the alphabet, filling in the gaps according to certain rules. But let us be wary of seeing only the absurd or insane aspect of this, and let us abstain from ridiculing it. For these people with their childish puzzle games and their cultural feature articles were by no means innocuous children or playful Phæacians. Rather, they dwelt anxiously among political, economic, and moral ferments and earthquakes, waged a number of frightful wars and civil wars, and their little cultural games were not just charming, meaningless childishness.

These games sprang from their deep need to close their eyes and flee from unsolved problems and anxious forebodings of doom into an imaginary world as innocuous as possible. They assiduously learned to drive automobiles, to play difficult card games and lose themselves in crossword puzzles — for they faced death, fear, pain, and hunger almost without defenses, could no longer accept the consolations of the churches, and could obtain no useful advice from Reason.

These people who read so many articles and listened to so many lectures did not take the time and trouble to strengthen themselves against fear, to combat the dread of death within themselves; they moved spasmodically on through life and had no belief in a tomorrow.

For there was also a good deal of lecturing, and we must briefly discuss this somewhat more dignified variant of the feature article. Both specialists and intellectual privateers supplied the middle-class citizens of the age (who were still deeply attached to the notion of culture, although it had long since been robbed of its former meaning) with large numbers of lectures. Such talks were not only in the nature of festival orations for special occasions; there was a frantic trade in them, and they were given in almost incomprehensible quantities. In those days the citizen of a medium-sized town or his wife could at least once a week (in big cities pretty much every night) attend lectures offering theoretical instruction on some subject or other: on works of art, poets, scholars, researchers, world tours. 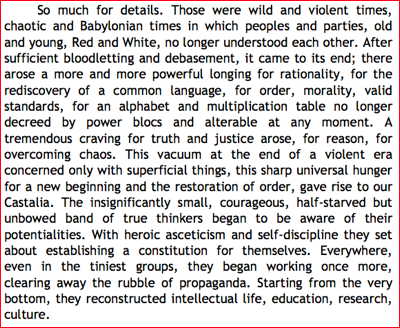 The members of the audience at these lectures remained purely passive, and although some relationship between audience and content, some previous knowledge, preparation, and receptivity were tacitly assumed in most cases nothing of the sort was present. There were entertaining, impassioned, or witty lectures on Goethe, say, in which he would be depicted descending from a post chaise wearing a blue frock-coat to seduce some Strassburg or Wetzlar girl; or on Arabic culture; in all of them a number of fashionable phrases were shaken up like dice in a cup and everyone was delighted if he dimly recognized one or two catchwords.

People heard lectures on writers whose works they had never read and never meant to, sometimes accompanied by pictures projected on a screen. At these lectures, as in the feature articles in the newspapers, they struggled through a deluge of isolated cultural facts and fragments of knowledge robbed of all meaning. To put it briefly, they were already on the verge of that dreadful devaluation of the Word which produced, at first in secret and within the narrowest circles, that ascetically heroic counter-movement which soon afterward began to flow visibly and powerfully, and ushered in the new self-discipline and dignity of the human intellect.

It must be granted that many aspects of the intellectual life of that era showed energy and grandeur. We moderns explain its concomitant uncertainty and falseness as a symptom of the horror which seized men when at the end of an era of apparent victory and success they found themselves suddenly confronting a void: great material scarcity, a period of political and military crises, and an accelerating distrust of the intellect itself, of its own virtue and dignity and even of its own existence. Yet that very period, filled though it was with premonitions of doom, was marked by some very fine intellectual achievements, including the beginnings of a science of music of which we are the grateful heirs.

[From The Glass Bead Game: (Magister Ludi) A Novel By Hermann Hesse]

Previous post: Blink Fast: The History of Art in One Minute