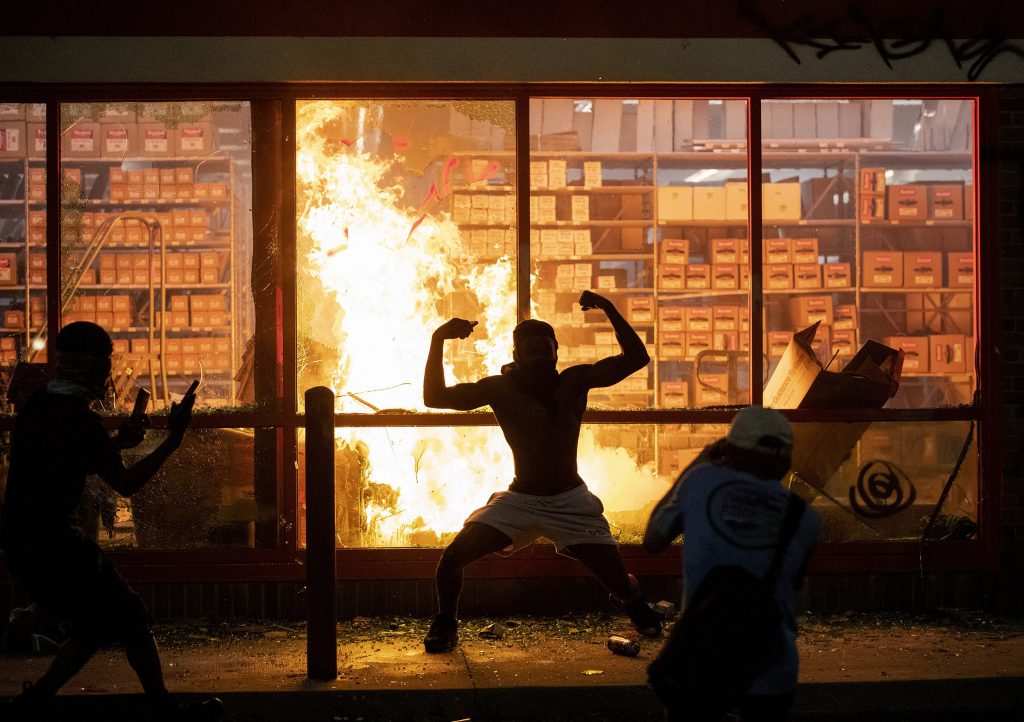 Down at the AutoZone the Fire Sale is heating up.

The police abandon their house in the 3rd Precinct. And then rioters set it on fire.

Yeah, right Chris. The cop who is the chief suspect is over at the Auto Zone kicking out windows.

That cop and his family are in hiding, as there is a 24/7 protest at his house.

If you are a store owner, or a retail employee in Minneapolis, it became abundantly clear in the last three days. The City of Minneapolis does not give one shit about you or your livelihood, your safety, or your property. They care more about looters. Oh, and a CNN crew.

I’ve been saying this for years. In fact, our boy mayor Jacob Frey was luvved, luvved by businesses in his downtown district when he was on the council. Not because he got anything done for them; they all said he talked a lot but did little. No, his claim to their support was that he listened to them. None of the other 12 council members would listen.

If you were an independent retailer, you had some degree of freedom to threaten and hell, drag thieves into the back room for a beating. It happened. The Mexican-and Muslim-owned stores would tolerate a lot less. But CVS, or Walgreens, or Target, or Auto Zone, either had to just take it, or hire the Badge Gang. And we learned this week that the Badge Gang won’t even cross the street to stop a looting.

24 metro Target stores are now closed, all the way out to the third-ring suburbs. CVS and Walgreens have boarded up those stores that weren’t already looted. Every pharmacy and pawn shop has been looted and burned in a zone that saddles I-94 well into St. Paul.

Can you fill a prescription in Minneapolis today? At the county hospital, and the other big two, perhaps.

Oh, they busted out the very, very expensive Pelli-designed windows at the library. Because justice, man.

Much more burned Thursday night. The National Guard arrived, but had no clear orders, and did little. The area around the 3rd Precinct, the center of protests, is now secured by a couple of hundred police.

In north Minneapolis where I live, pretty much every business has been destroyed. None of this is in the news. They were still looting here as of an hour ago. The media are concentrating on downtown and Lake Street.

Unless you go to a hospital pharmacy, you cannot fill a prescription in Minneapolis.

I don’ t think you can buy a bottle.

Facebook is full of tales of how an off-duty St. Paul officer started the whole destruction thing. In other accounts it was the cop who killed the guy. None of the tales account for how so many people were eager to do the bidding of the cops by looting.

The boy mayor is walking in little circles muttering, “but I thought if I was nice and kept them from being arrested, they would love me.”

The governor is telling us how his top priority is protecting the media.

The attorney general is telling us how we have to make the merchants feel safe again, after we have justice, of course. I have news for Keith, who was once my state representative and later my congressman: The merchants didn’t feel safe before the riots. How about you investigate why Minneapolis won’t defend the merchants from the feral?

And Casey Klahn sums it up with:

Next post: [Bumped] “Hey, you know something people? I’m not black, but there’s a whole lots a times I wish I could say I’m not white” — Frank Zappa