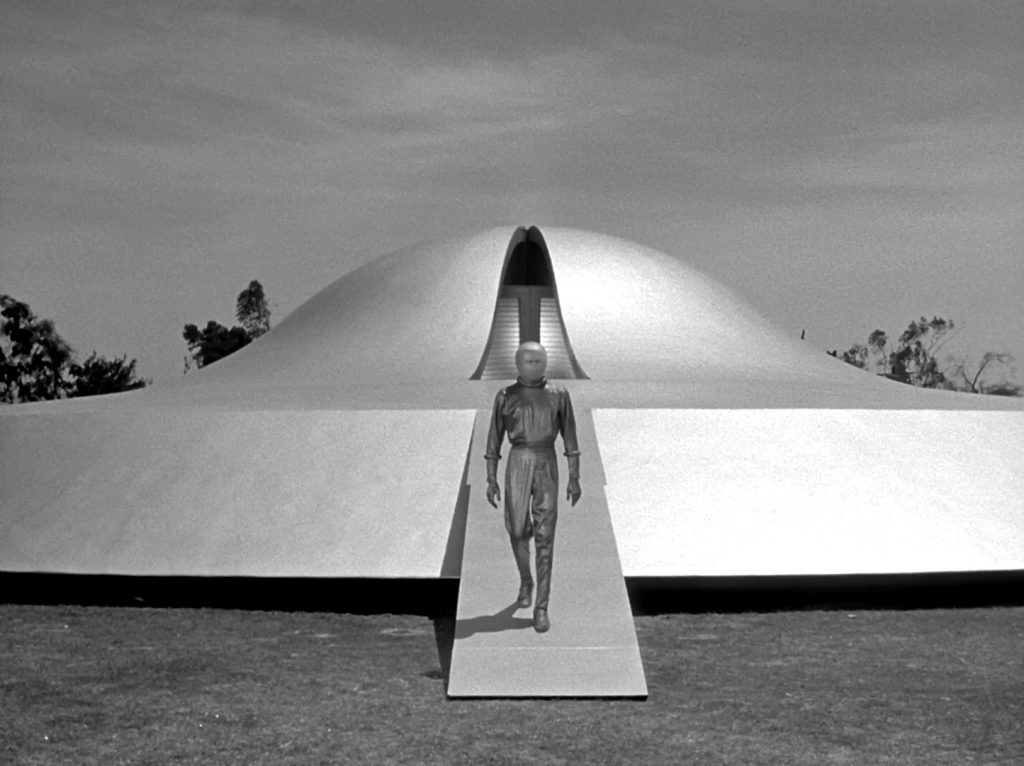 From the Z Man’s Weekley Podcast. If you’re not listening, maybe you should: Maybe it is me, but our side of the great divide seems a bit down the last few weeks, with all the bad news coming from various quarters. President Fink backtracking on his promises, the rising brown tide pouring over the border, the book banning and so forth is taking a toll on morale. This is just part of the game probably. In the midst of all great societal upheavals, the participants have had their dark moments. I find myself watching videos of otters on YouTube more often than normal, just to keep the spirits up. Underdogs | The Z Blog

A Different Kind of Theory of Everything |

In 1964, during a lecture at Cornell University, the physicist Richard Feynman articulated a profound mystery about the physical world. He told his listeners to imagine two objects, each gravitationally attracted to the other. How, he asked, should we predict their movements? Feynman identified three approaches, each invoking a different belief about the world. The first approach used Newton’s law of gravity, according to which the objects exert a pull on each other. The second imagined a gravitational field extending through space, which the objects distort. The third applied the principle of least action, which holds that each object moves by following the path that takes the least energy in the least time. All three approaches produced the same, correct prediction. They were three equally useful descriptions of how gravity works.

“One of the amazing characteristics of nature is this variety of interpretational schemes,” Feynman said. What’s more, this multifariousness applies only to the true laws of nature—it doesn’t work if the laws are misstated. “If you modify the laws much, you find you can only write them in fewer ways,” Feynman said. “I always found that mysterious, and I do not know the reason why it is that the correct laws of physics are expressible in such a tremendous variety of ways. They seem to be able to get through several wickets at the same time.”

The hipster effect: Why anti-conformists always end up looking the same

Making cheese from the black mold on your wall     I’d love to take the project further and travel with it to make further renditions that are area specific to where it’s exhibited, so that each place and the specificities to that local are examined. I’m also getting in touch with food labs to get an analysis of the cheese sample and its toxins. 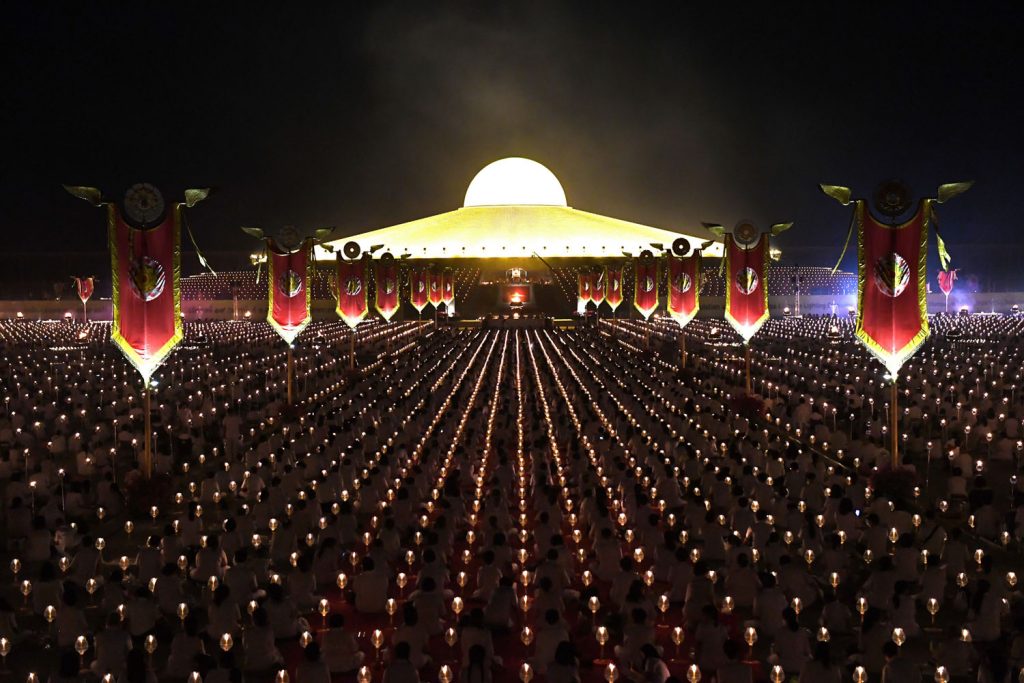 “Generic white #NeverTrump conservative” is already the most overrepresented type in American media. There are approximately 200 of these people in the United States, and every single one of them has a column in a major newspaper and a book about why Drumpf is the logical and polar opposite of certain ideals supposedly embodied in whatever Tocqueville quotes their research assistants have just pulled up for them. They are the same people who have spent the last two decades insisting that all the things that actually keep people voting for the GOP against their own economic interests — opposition to abortion and same-sex marriage — are yucky. They are often referred to as “neocons,” but this appellation is insulting to the legacy of Irving Kristol and Christopher Lasch. A better one is “metro-conservatives,” i.e., think-tank grifters. 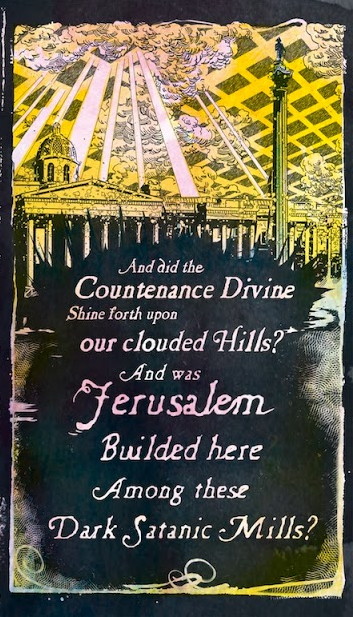 The pestilence grows. Groomers now feel secure enough to expand into enforcement. This scarcely to be believed photo is workplace and living room safe, which is a sad comment in itself. The old joke was, “how long before they make it mandatory?” Methinks we’re getting close.  Woodpile Report

Senator Harris seems to be doing it for canny positioning reasons: She is one of the shrewder campaigners so far, but MSNBC ran a wacky segment a few weeks back in which various black activists pointed out that she is not “African-American”. Ms Harris is half-Indian, half-Jamaican – ie, like Barack Obama, she’s a child of British subjects. And one way to deflect from the fact that black Democrat presidential candidates seem to be disproportionately drawn from outside the African-American experience is to sign on to reparations big-time.

Isn’t this beginning to feel the way it usually goes? No doubt somewhere or other the Mitch McConnell/John Boehner types are assuring everyone: Not to worry, it’ll never happen… But that’s what they said about Obamacare and gay marriage and all the rest. Democrat presidential candidates, “moderate” conservatives… Sooner than you think, Republicans will be telling each other: Let it go, this isn’t the hill to die on…

It’s tempting when looking at Venezuela to think “it can’t happen here”. Yet if history teaches anything it is that collapse can suddenly overtake seemingly solid societies. After all, the average civilization lasts 340 years. “More than 99 percent of all species, amounting to over five billion species, that ever lived on Earth are estimated to have died out.” Realistic leaders always knew that survival depended on a civilization’s adaptability and a design margin against some unpredictable shock rather than some guarantee from the Arc of History. Venezuela’s socialist leadership made the mistake of thinking Darwin no longer applied to them.  They were in control; they could predict and plan the future; they could even change human behavior. In so doing they created single points of failure whose collapse is still unfolding.

Why It’s So Hard to Restart Venezuela’s Power Grid |

“The challenge with black start is always just knowing specifically what happened,” says Nathan Wallace, director of cyber operations and a staff engineer at secure grid companies Cybirical and Ampirical Solutions. “It sounds like there may be lack of maintenance and some mismanagement. And typically if a system hasn’t been maintained, that means they really don’t have the visualization needed to understand the state of the system in real time. If the procedure for black start is not accurately representing the state of the system, there can be problems.”

Liberty’s Torch: From one of the Left’s leading sphincters.

Know what we DON’T have all that much of out here, though? Desperately lonely single women haunting those art galleries and theaters hoping in vain to meet someone, anyone, who might be willing to partner up and rescue them from retiring to a cramped, preposterously expensive apartment or condo filled with ten or fifteen cats. See, what people out here have are families: wives, husbands, and children they adore and are devoted to. I know how rare that is myself, having spent five years in NYC; you’re more likely to hear bagpipes on the street than you are the sound of a bunch of kids laughing and romping around at play. The kids’ moms and dads wouldn’t trade you a million and one Teslas or gallery openings for the richness of their family life. 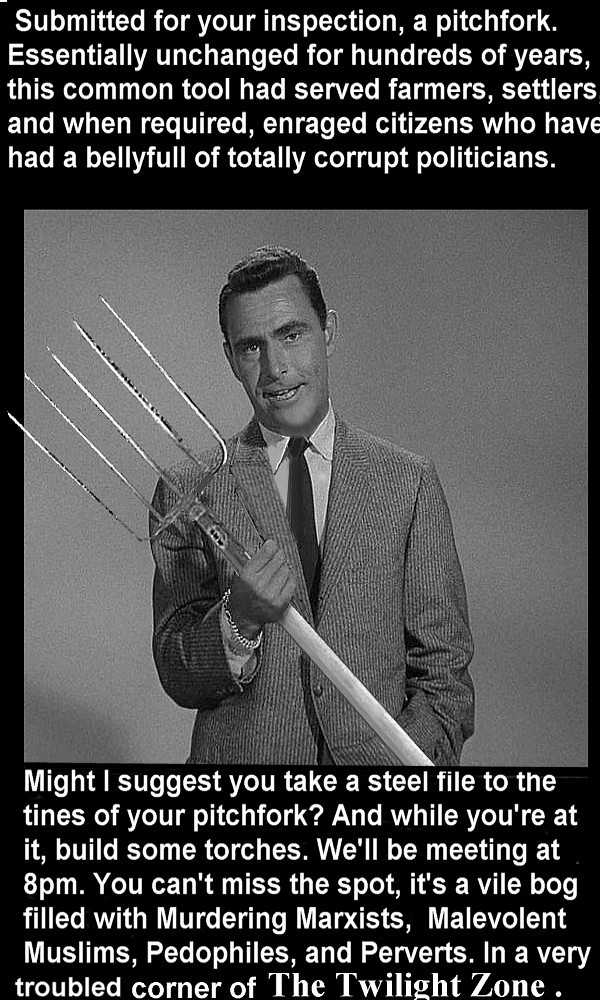 Modern gun owners are the new Negro. Private weapons ownership and communism do not mix.  ZeroGov | The Gun Owner is the New Negro

Unvaccinated Oregon Boy Contracts Tetanus For First Time In 30 Years Oregon leads the country in parents exempting their children from common vaccines at 7.5 percent. Perhaps most disconcerting, the six-year-old boy’s parents rejected a second dose of the tetanus vaccine and other suggested immunizations after the boy’s eight-week and $800,000 hospital stay.

Assembled into large gangs, the university-based Red Guards intimidated establishment figures in the educational and political spheres by publicly shaming and berating them, coercing confessions from them for imaginary crimes against the principles of social, political and economic justice of the Revolution, and with increasing frequency physically assaulting and/or killing them. These purges included Party members who had previously been considered to be staunch supporters of the Revolution but had been deemed to be lacking in sufficient revolutionary fervor.  Declination – Blogging in the Decline of Western Civilization

The Morning Rant   You know who I think is a good example of grrl power? Dorothy Gale. You know, the character played by Judy Garland in the classic Wizard of Oz film. I don’t know about the character in the book, but in the film version, Dorothy spent most of the journey through Oz scared to death. But do you know what? She slapped a dangerous lion in the snout. She threw water on a witch. And she called out a wizard with god-like powers for being a lying sh*tweasel. She was not any less afraid, but but she did what was needed to be done at the time she needed to act. That’s courage. That’s grrl power. And she didn’t just stand there striking a pose.”

Why Democrats Would Lose the Second Civil War, Too

It’s obvious that the central tenet of the Democrat Party platform is now hatred and contempt for Normal Americans. Taking their cue from the elites in Europe and Canada who are stripping dissenters of their free speech rights and religious freedoms, the leftist elite is moving to solidify its hold on power here with the eager assistance of tech companies and the moral support of the Fredocons who yearn to return to pseudo-relevance as the ruling class’s slobberingly loyal opposition. In California, the leftist government is practically firing on Fort Sumter. And nationally, these aspiring fascists are especially eager to disarm Normal Americans – doing so would be an object lesson in who’s the boss, as well as solving that frustrating problem of the Normals having the ability to resist.

Beto O’Rourke |   That said, Beto is the last white man of the Left. The Democratic field is women and non-whites. If Biden runs he’ll be the second white man in the field, a nice bookend to O’Rourke. On the one end you have an old man inspired into politics by a culture that was full of life. At the other end, you have a man who got into politics because he needed work and his dad had some connections. One is a vague memory of the confident young man with swagger, while the other, the younger one, is the old man in the winter of his life.

So yes, it becomes increasingly difficult to say, honestly, that we’re happy we have a dog. Yet for all the woes that I could easily catalog over the 15 years of a tumultuous life with our dear Lucy, I find us undeniably diminished by her departure. She died yesterday, medically induced. It was a decision we made based on the fact that for however much longer she might go on, every single day would be both her best day remaining, and also worse than the one before. We did it for her. We did it to let her go out on the highest note she had left. 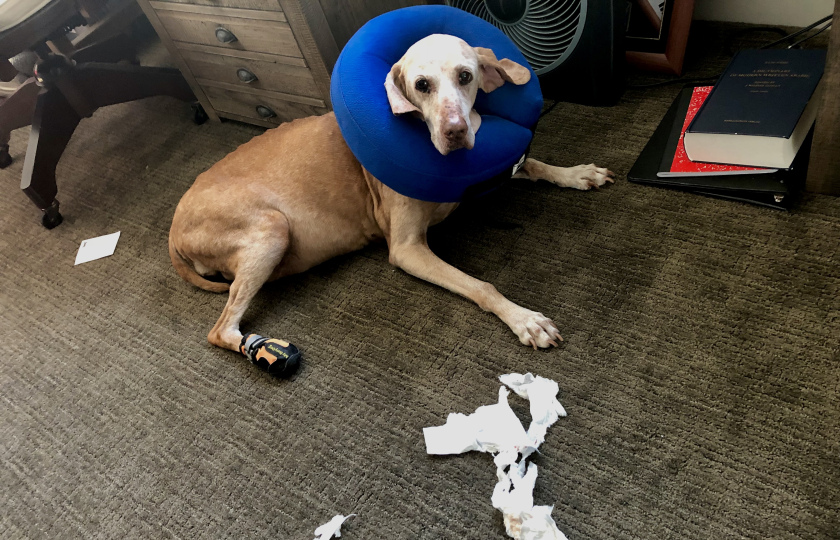