The Gun School: Now with the best comment thread. 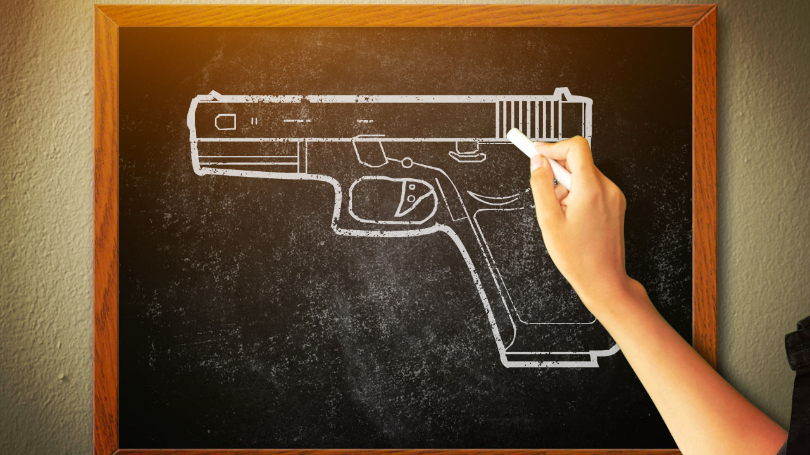 What I said to my “concerned” friends that asked was, “I like to collect permissions to do things.” I lied. Being freaked out that anyone they knew would take gun training and get a concealed weapons permit, they tacitly agreed to believe that lie. It kept everything smooth and “non-political,” which I how a lot of my friends and I like it these days. All part of the little lies we tell because we cannot face reality in the world and in our relationships.

I took pistol training because one day it dawned on me that if I ever actually needed a gun it would be too late to shop.

It dawned on me after an unarmed mother and daughter were shot to death hiking in the mountains around Seattle. (Mother Daughter Shot While Hiking). It dawned on me after an enraged Muslim had bluffed his way into the Jewish Community Center of Seattle last summer and shot six women and killed one. (Six Women Shot One Killed at Jewish Federation) That was the week I went and signed up for gun training. After the training, I felt I would be qualified to get a gun. I would get it because it was my right to get it. I would get it because I could. I would get it because Washington, no matter how deeply mired in denial and dementia Seattle may become, Washington itself is still a “must issue” state. And how long that would last in the demented rush to disarm and make all citizens effective wards of the state for their “protection” was anybody’s guess.

Tracking the killings of over 30 unarmed, effectively disarmed and therefore helpless students, at Virginia Tech [in 2007] confirmed me in my decision. It took many bullets for this tragedy to unfold. It would have taken just one going the other way to stop it. That and the training to know what the situation was and how to react.

Unless you are morally, spiritually, and politically blind to human reality, you know that this is the truth.

Just one weapon on one person in the hundreds that ran and scattered in front of the maniac could have written a much different ending to this sordid and vile rampage. But there were none because the regents and officials and politicians responsible were mired in yet the persistent liberal utopian dream of a world that never was and never will be. In a very real sense, those students and those that have died elsewhere since were sacrificed to the flaccid politically correct beliefs of those charged with their education and their security. What they made in their yearning for perfection was a perfect “free-fire zone” for maniacs.

The people who sit around and dream up their “perfect world policies” never suffer any consequences to a great enough extent to give the others of their ilk pause. It’s a consequence of decades of dementia among those that gain positions of trust and tenure at our colleges and then hire other similarly demented people to chum up with them. It’s the “old liberals’ network” that is every bit as protective as the “old boys’ network” it so preeningly replaced.

We’ve handed off our colleges to weaklings and the intellectually insane. No surprise when fresh insanity breaks out and kills our kids. No surprise at all. And the kicker is that these people with these mindsets stand ready to do it again in exactly the same way at some other location. What happens in the real world doesn’t dent their wooly womb at all. Their school is not now and never will be The Gun School.

In the real world, the Gun School I attended wasn’t what anyone  who would never consider taking gun training would think. Every progressive I spoke with when I was taking the training expected a place surrounded by pickups sporting Confederate Flag bumper stickers and gun racks. It didn’t matter that The Gun School existed a half a mile from Microsoft in the deepest heart of soft and fluffy nerd land. They had their internal image of ‘gun nuts’ and they were sticking to it. Reality cannot hope to displace insular group fantasies decades old.

In reality, my class at The Gun School was composed of about 14 people and it met four times for three hours. It was basic gun safety and handling. Everyone who wants to get a gun needs to take such a class. A gun is not a pick-up and go play kind of thing. As we are all aware, a gun is the kind of thing that will, to say the least, hurt you or someone else real fast and permanently if you get stupid with it. It can hurt you even worse if a maniac has one and you don’t. Then you’re just a target for their rage and an instrument of their twisted pleasure. Without a gun you’re going to go and you’ll go cheap.

Of the 14 people in my class, seven were women — of which four were two lesbian couples. One and all told me they were there because of the killings of the mother and daughter who had been shot while hiking near Seattle. They had, I noted, the regulation number of anti-Bush stickers on their cars.

Two somewhat elderly Jewish couples took another four chairs. They were, I discovered, lifelong and committed Democrats and both drove the same model Prius. They were there because of the shootings at the Jewish Community Center. One of the wives, a grandmother type, said almost in passing, “It could happen again.”

Then there was the programmer from a company he declined to name (“My coworkers and manager would think it really weird if they knew I was here.”) and one man in his 20s who “just wanted to learn how to shoot.” He drove a muscle car with no bumper stickers proclaiming his ideological persuasion. And then there was me. 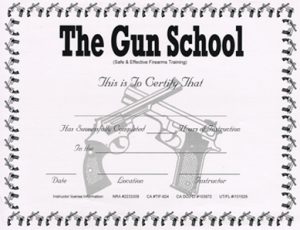 The only thing vaguely ideological about my car is the license plate that says LEM for “Law Enforcement Memorial.” When I registered the car I had my choice of “theme license plates” that would let me celebrate the woods, the streams and a host of other ecologically correct Washington themes. Way down at the bottom was a new one that gave the extra fee to a memorial in honoring Washington police who have died in the line of duty. These days it somehow seemed more fitting to me, but then again I’m strange. I go to things like The Gun School. When my friends ask me about why I have a plate on my car honoring law enforcement — a function without which their happy perfect world could not exist — I tell them I think it will give me an edge if I’m ever stopped for speeding.

Like my reasons for going to The Gun School, I’m lying, but it helps keep their happy world intact and, really, once you’re armed you always want to keep everything very polite.

But am I armed? Maybe. Maybe not.

Previous post: The Detroiting and Death of Seattle (by a liberal journalist no less)