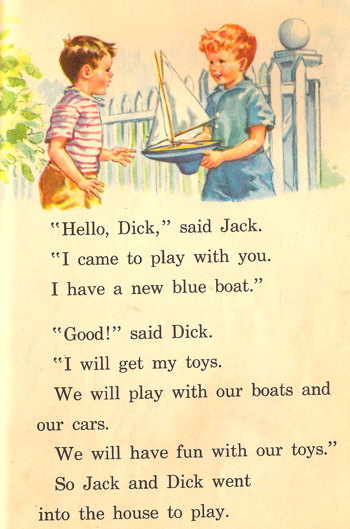 These panels taught me … that the creative contextualization of a play like The Vagina Monologues can bring certain perspectives on important issues into a constructive and fruitful dialogue with the Catholic tradition. This is a good model for the future. Accordingly, I see no reason to prohibit performances of The Vagina Monologues on campus and do not intend to do so. — Rev. John I. Jenkins, C.S.C., President, University of Notre Dame

Like the befuddled Reverend Father above, I too — in a fit of “creative contextualization”— seek to bring “certain perspectives on important issues into a constructive and fruitful dialogue”. To further that mission, there is a secret evening of drama has been taking place in numerous undisclosed locations about the nation. We are all aware of the unstoppable chunk of feminist flatulence known as “The Vagina Monologues,” but few know about the blowback that is “The Dick Dialogues.”

The Dick Dialogues is usually performed on the down-low in the basements of sports bars, carefully darkened car-repair garages and the deepest forest amphitheaters of the Bohemian Grove. Attendance is strictly male and strictly invitation-only since in many states the mere thought of giving a performance of “The Dick Dialogues” would constitute a hate crime.

“The Dick Dialogues” consists of two men, traditionally named “Plick and Plack. the Fappet Brothers” slumped in Lay-Z-Boys in their Rec Room. Here they field calls on a speaker phone from a series of male, female, and neutered voices. The actors, clad in the traditional native garb of jeans, Hooters t-shirts, baseball caps, and tutus, respond to questions during an extended half-time at a fantasy football league’s Super Bowl. The cost of admission is a donation suggested to be equal to one month of the attendee’s child support.

Spontaneous, unrehearsed, and always faintly pissed-off, “The Dick Dialogues” continue to gather fans and acolytes in the secret Royal Order of Meese (Named after the Sainted Ed Meese, blessed be his Attorney General’s Commission on Pornography.) in cities here and abroad wherever non-gelded males still are to be found — either in captivity or free-ranging.

I recently attended a performance of the Dialogues in San Francisco. At first, it was to be performed in the basement of the Gay Hooters in the Tenderloin but the proximity of the LGBTQ Auto-Fellatio World Headquarters and its vast stocks of neutered males made this a security risk. So it was moved to a secret location in the model rooms at a South of Market superstore with the code name AEKI.

While waiting for the show to start, early arrivals were entertained with classic girly skits such as “If You Really Loved Me, You’d Buy Me a House,” “Darling, You’ll Never Guess How Much I Saved Shopping Today,” “Please Pay Off My Credit Cards Again,” and “What the Frikin’ Hell Are ‘Window Treatments’ Anyway?”

The Dick Dialogues began at midnight with sacred de-estrogenation rituals involving the burning of large numbers of cigars, the consumption of local malt beverages, Jagermeister shots, and ten choruses of Kumbaya topped off with a coordinated group belch.

I am forbidden to disclose the full text of that evening’s Dick Dialogues, but one particular exchange does stick in the mind. Halfway through the evening, the phone rang in the “Rec Room” and a reedy, frustrated female voice asked:

I’ve recently returned my vintage Dick to the general Dick pool, but find I still need a Dick from time to time for the small chores and larger tensions of my life. I’m reluctant to buy a new Dick outright in this market? Do you know where I can rent one? Or would leasing a Dick be a better deal?

The evening’s official Dick Dialoguers rolled their eyes, did a Jagermeister shot, popped open a Bud, took a big hit off Ghengis Bong and answered as follows:

Plick: “Lady, Dick rentals are chancy at best. While once a  dependable option, these days provenance is all. You need to know where and by whom your U-Haul Dick has been rented in the past. Especially in the Bay Area where the last time all Dicks should have been Aids Tested is tomorrow. Outside of the extremely high-end dicks that don’t get a lot of traffic, like, say, the Bill Gates, U-Haul dicks are rented to all sorts of people who tend, like bad horse trainers, to ride them hard and put them away wet.”

Plack: “Yeah, and don’t be taken in by all the propaganda coming from all the big Dick rental firms, especially DickHurts, about Pre-Owned Pre-Certified Dicks. Certifications of safe rental dicks are extremely suspect these days, what with STDs being so rife in City agencies charged with certifying your that rental Dick is clean, responsive, fully fueled, and comes with a functional hairbag.”

Plick: “Right. I even advise that, should you decide to really blow some cash and rent the high performance dicks, you should deploy the hairbag before starting it up.”

Plack: “Even then, you have to bear in mind that certification is a flawed policy in any event. In this era of ‘Don’t bask. Don’t kvell.’ full disclosure is a sometime thing.

Plick: “He’s right. Your rental Dick can be certified in the morning after it is returned from, say, a fully fanatical fund-raiser for that Buttiplug guy running for Hillary… ”

Plack: “…where it has been no doubt passed around like a stripper entertaining a lycanthrophiliac Lacrosse team…”

Plick: “Nyuck, nyuck…. and it can still have had several furtive afternoon rentals by San Francisco’s very desperate housewives before your evening rental slot comes up (so to speak). ” 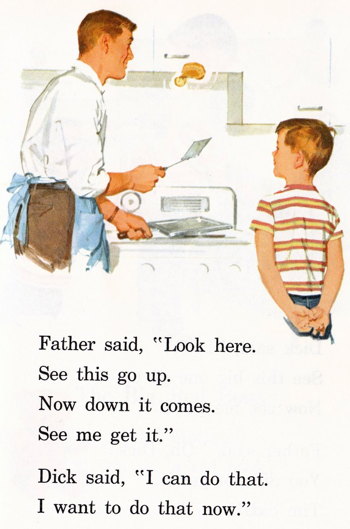 Plack: “Should you, however, decided to go with a Dick rental, be sure to sign up for the Snap-On-Tools fanny pack and demand to see not only the certification, but the Dick’s in-and-out punch card for the last 48 hours since short-term day rentals is where a lot of wanton Dick abuse takes place. Always remember the first rule of Dick rental: ‘Just cause it shine don’t mean it be fine.’ ”

Plick: “Yes, and one final caveat, ladies. Do not trust the odometer reading on the shaft since this is known to be an easy place for the shrinkage of numbers. What may appear to be “24” may well, on close examination, prove to be “243, 784,” which would indicate not size but rather a Dick well past its sell-by date.”

Plack: “As to the second part of your question, leasing a Dick is not that much a better deal. Indeed, in leasing you become responsible for the care and maintenance of your Dick for the full term of the lease. This can cause you to expend much more money than you had planned on when signing the lease.”

Plick: “Too true and unless you are handy with at-home dick repair with a wide selection of lingerie, this can run into the big bucks if you have to job your Dick out.”

Plack: “You got that right, my brother. The other disadvantage is that, should you become disenchanted with your leased Dick you can only return it by paying an early discharge penalty. Otherwise, you’ll find yourself stuck with a Dick you no longer like just hanging around the house, whining, because you won’t gas, oil and lube it like you used to.”

Plick: “Your Dick could even get sullen on you and spend its evenings in the garage making a scale model of the USS Enterprise instead of cuddling up for American Idol.”

Plack: “A revoltin’ development for sure. So remember that your lease will be for a term of years and, should you be like most women who seek to operate but not own a Dick, you will be bored with the size, color, and shape of your Dick long before the lease period expires. This has the added disadvantage that your Dick will be equally bored with you, probably sooner.”

Plick: “You’re damn skippy. The leasing and rental Dick options have recently proved so problematic to women that many sisters are defaulting to a straight vagina swap among friends. This is considered by many to be, if not a penetrating solution to the problem, at least a dependable bit of a happy time plus an opportunity to exchange wardrobes if the sizes are commensurate, or a second source of accessories if they are not.” 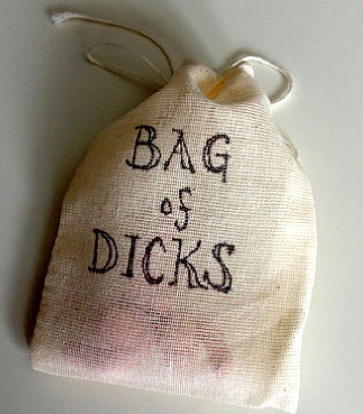 Plack: “Don’t forget that vagina swapping has the added advantage of giving the swappers someone to talk to about how terrible the Dick situation has become in the nation of late.”

Plick: “That’s a strong point, what with two vagina monologues always being better than one, but let’s admit that swapping is not for everyone, even ex-wives.”

Plack: “Research by the San Francisco Pooh Charitable Trust shows that to be so true. So what to do, my brother? What to do?”

Plick: “Well, if neither renting or leasing satisfy, our sisters might want to consider a Dick time-share. This is usually the most equitable solution for all involved, and is strongly supported by the International Brotherhood of Dicks.”

Plack: “That’s a sooper-genius solution, my brudder. The only drawback is that the negotiations for a Dick time-share tend to long and drawn out, sometimes frustrating, and can collapse at any moment for what seems to be the most trivial of reasons. It’s a little like trying to be accepted into an Upper West Side Liberal co-op while Mexican. It can be done but you have to bribe many and guilt-trip more.”

Plack: “It does happen, that much we know, thanks to San Francisco’s Pooh Charitable Trust. The downside of a Dick time-share is that, like all property arrangements, getting out of the deal before the other party has agreed can be costly, time-consuming and highly aggravating.”

Plick: “Whoops, again you’ve wasted a perfectly good half-time listening to The Dick Dialogues. As you can see, there is no single simple, sane and safe solution to the Dick dilemma. Still, with application and drive, there’s no reason that a reasonable woman would not, in time, be able to solve the problem to her satisfaction, for the rest of her life or at least 90 days, whichever comes sooner.”

Next post: Bored with Basketball? I Am. Try My New Spectator Sport.

Previous post: To Vacuum the Vacuum Use the Vacuum