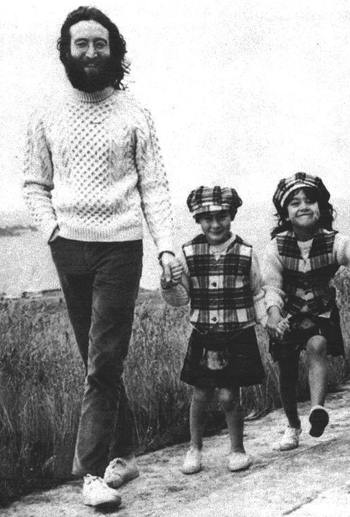 We’d finished filming John and Yoko for the video a day or so before he was shot to death. It was their last video, but of course, we didn’t know it at the time. There was film of them holding hands and walking in Central Park in the place that would later become “Strawberry Fields.” We’d filmed them rolling naked in bed together in a Soho Art Gallery where she looked healthy and ample and he looked small and slight, with skin that was almost translucent. I remember being slightly surprised by the fact that Lennon’s need for Ono was so constant and palpable. He was seldom more than two feet away from her side and had the disconcerting habit of calling her “Mommy” whenever they spoke.

My role was as “executive producer” which really meant that I was to stand around with a roll of hundred dollar bills and pay-off the Teamsters and solve other problems with copious applications of money. It was an odd job in more ways than one, but I was grateful to have it at the time.

We’d sent the last of the film to the lab, and my old friend and director Ethan Russell had gone back to Los Angeles to begin editing. The crew had dispersed and I’d taken to my bed racked with pain. The job, this time, had been so tough and high stress that my neck had gone out. I could barely turn my head without feeling as if a sledge was hammering a hot-needle into the cervical vertebrae. I was lying carefully propped on the bed eating Bufferin as if they were Tic-Tacs and trying not to move. My neck was held in one of those tight foam collars. Not moving was the best thing to do at the time and I was doing it with all my might.

It was a small one-bedroom apartment on the East Side of Manhattan. My first wife and I were there after three years of living in London, Paris, the Algarve, and other European locations. She was eight months pregnant with our daughter and looked as if she was trying to smuggle a basketball across state lines for immoral purposes. Her mood, never really cheerful, was not improved by her situation.

The apartment was on loan from her uncle’s girlfriend. I was down to my last few thousand dollars and was looking for a job. The film gig had been a gift from my old friend Ethan, and I’d been glad to get it. But it was over and, with a baby banging on the door of the world, things were not looking up. At the time, the only thing looking up was me since my neck required me to lie flat and gaze at the ceiling. It had been a rough two weeks but I thought things would certainly improve.

And of course, that’s when things got worse. It got worse in the way most things do, the phone rang and my wife called out, “It’s for you.”

Some New York wag once said, “Age fourteen is the last time in your life when you’re glad the phone is for you.”

I groped blindly to the side of the bed and picked up the extension. It was Ethan calling from an editing room in Los Angeles. “John’s been shot. He’s dead.”

I think my reaction then was my reaction now when I wrote out the phrase above. I just stopped doing and thinking whatever I was doing or thinking and stared at the rough plaster ceiling above and blinked slowly in the silence.

Then I said whatever I said. I’m sure I expressed shock, disbelief, and something about how alive he’d been at the filming session the day before, or two days before… whatever it may have been. But Ethan, ever the professional, brought the call back to the reason for it.

“Here’s what has to be done and done now. The footage we shot in the park is now the last footage ever taken of John. It is sitting in a film lab in Manhattan. We’ve got to get control of it, all of it, and secure it until everything is sorted out. There can’t be a bootleg copy floating around for the tabloids and the television shows. It’s probably the property of Yoko but we’ll sort that out later. For now, you’ve got to get it out and safe.”

The call ended and I stood up. Slowly. Dressed even more slowly and watched, as I dressed, the unfolding of the end of Lennon’s life as reported, beat by beat, by all the television stations on the dial.

The next 24 hours are a blur. I remember sitting rigidly in the back of a limo learning to hate the potholes of the New York streets with a passion as each one slammed another heated needle deep into my neck. I somehow got the film out of the lab and took it to a midtown bank and placed it in a safe-deposit box. There were lawyers and paperwork to deal with, phone calls and more instructions.

The street in front of the Dakota was packed with people along both sidewalks and the crowd spilled into the street. The police were keeping it moving in a quiet way. Small seas of flowers flowed across the sidewalk and up the walls and gates of the Dakota. Pictures and scrawled messages of love and loss were taped to the walls and flung into the flowers. Widening puddles of melted wax where hundreds of candles burned lapped at the edges of the flowers. Some people held each other, others walked and wept openly. Some stood to the side and sobbed quietly. A path through the offerings had been cleared at the entrance to the Dakota and to get in you had to wade through the grief. 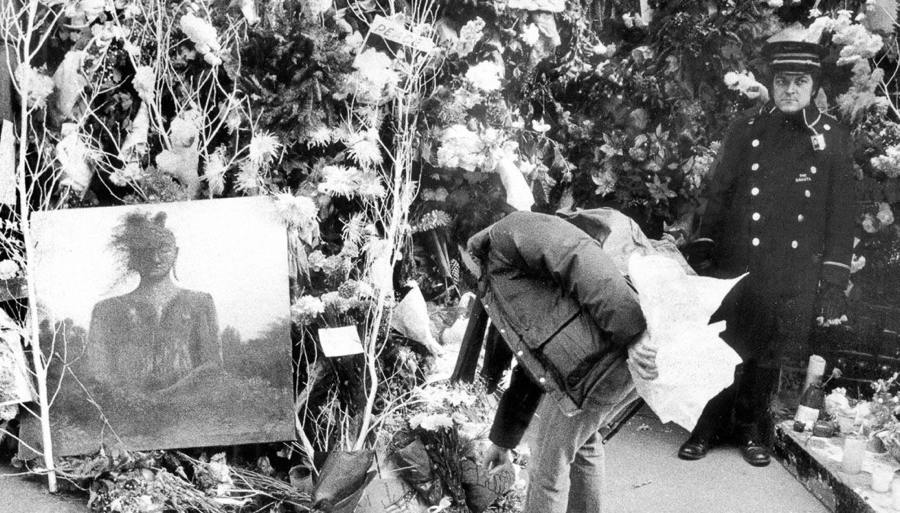 This spontaneous shrine was a harbinger, as so many things in John’s life and death were. The same motif of flowers, pictures, candles, weeping, and grief would be repeated on a vast scale across the entire city and country some 21 years later on 9/11, but that sort of thing could not have been imagined in December of 1980. This was the largest grief that could then be conceived by us – the killing of one of the Gods of music. “Our music.” Which the “Man can’t bust,” but, as had just been proven by one of our lunatics, we could kill.

Taken large, this was the death of the music in the death of a man in whom we’d invested much of our misplaced faith. Taken larger it was the death of the 60s and all that we once “imagined” it might mean, might become. And all of it happening in a way that would be echoed in later years as the 60s died again and again – and always at the hands of those that lived it. I might have seen it then, if then I could have seen clearly, as a portent of so much that sprung from those fertile blindingly optimistic years that would go wrong and twisted in the years ahead, but “I am no prophet and here’s no great matter.” 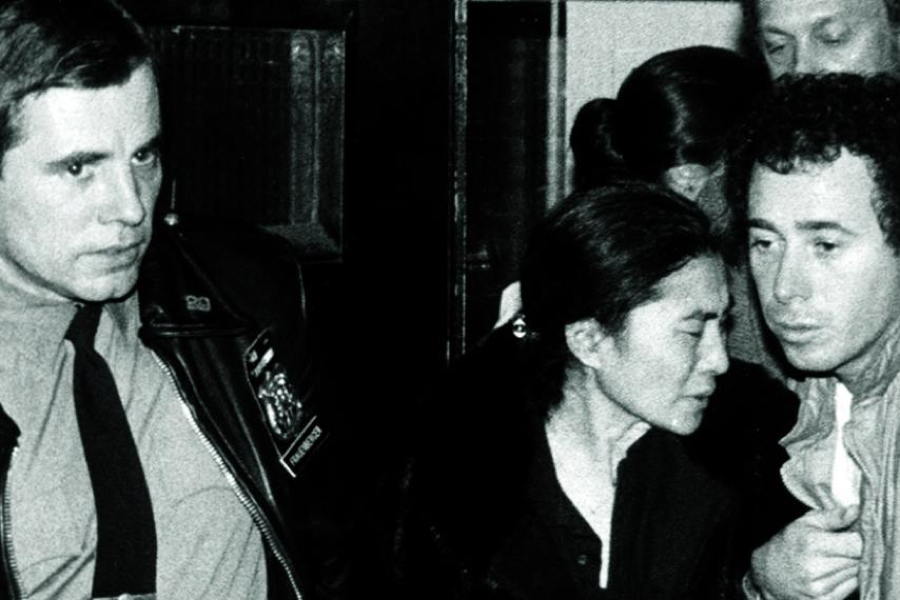 On that day, I didn’t see anything clearly — nor would I for decades. I just walked into the courtyard of the Dakota, took the elevator up to the apartment, said some words to the small and aging Asian woman in the white room, dropped off legal papers and keys and went down the elevator, out to the car and had it drive me back to bed across the park.

That’s what I did on that day. Just another walk-on part in the war.

Some days later there was a memorial service for John in Central Park. I went with an old friend from Berkeley, Jon Cott, who’d interviewed Lennon once or twice over the years for Rolling Stone. I don’t remember much about the service. I’m sure “Imagine,” that anthem of dubious distinction, was sung by all of us, and that there were more flowers and candles and crying as is the way of these things. 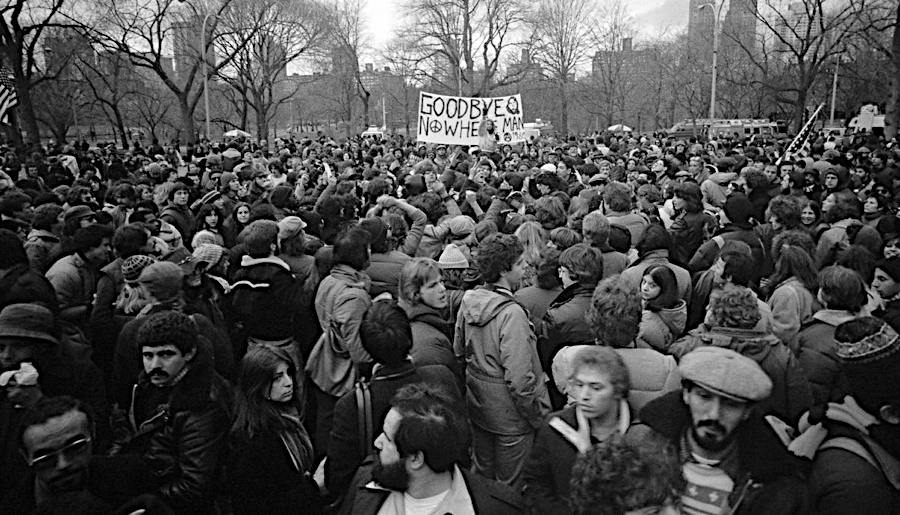 When it was over, I walked out of Central Park with Cott, one of my amigos from those diamond sky nights in Berkeley, the Haight, “swinging” London, and all the other scenes we’d flowed through in the 60s and 70s. I walked East out of the park towards what would soon become not just my first wife, but my family for 12 years — a whole new life containing all the seeds, good and bad, of the old dead life.

I said goodbye to Jon Cott at the entrance to the subway that would take him downtown to the Village where he’d put aside writing about rock and roll and was now writing a book about children’s fairy tales. Cott was always just ahead of the curve. I watched from the street as he went down under the ground.

I’d never see him again. But then I’d never see the 60s again either. On that day, it all went down under the ground.

The video contains autumn footage that was shot by Russell and our crew just before Lennon’s assassination.

Next post: “Timeless and enduring” 2020’s color is Classic Blue